Recently my son Shintaro and I went to the Tesla showroom in Aoyama, Tokyo to take a Tesla Model 3 for a test drive. I wanted to see for myself how this electric vehicle compared to my almost 12 year old Prius hybrid and to be able to compare it to future EVs from other brands that we may eventually consider. 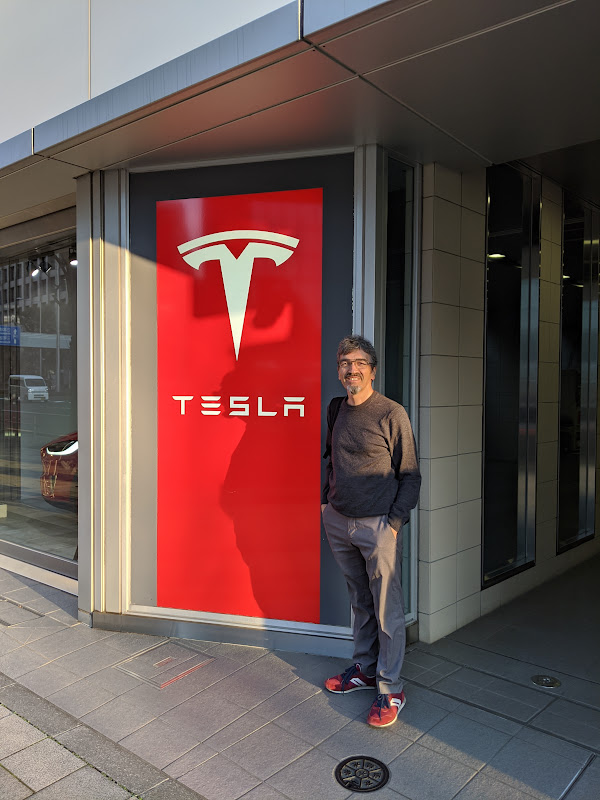 I’d noticed an increasing number of Teslas around Tokyo, though they’re still far rarer than around the San Francisco bay area. Given that much of Japan is densely populated, range anxiety (an often cited reason for slow electrification) should be less of an issue here compared to the US, particularly with cars that already have over 400 km of range.

I love the practicality of the rear hatch of my Prius that allows me to carry two road bikes without disassembly by simply folding the rear seats. The Tesla Model 3 has a much less accessible trunk, which pretty much rules it out for me. The Model Y will be more practical, but is also even bigger. Apparently it won’t be available in Japan until a year or two after it starts shipping in the US this month (March 2020).

Tesla’s models are quite large by Japanese standards, with implications for parking and for driving on narrow back streets. For example, these are the dimensions of the Tesla Model 3 vs. the current generation Toyota Prius (XW50):

Exact numbers for the Model Y aren’t available yet, but it’s expected to be about the same width but about 1600 mm tall (160 mm taller than the Prius).

The test drive was an unusual experience by Japanese standards. Somebody had mentioned that the dealer experience with Tesla is more like visiting an Apple store than a traditional dealer showroom. I’d say the difference was even greater.

Customer service expectations in Japan are incredibly high and that is probably one factor for Tesla’s relatively sluggish sales here, see a recent Japan Times article.

Shintaro had tried to make the reservation online and was promised a callback within 48 hours, but that never happened so he had to call again to fix up an appointment.

Even when I take my Prius to an oil change at a local gas station, I’ll be served a cup of coffee while I wait. By contrast, when we visited the Tesla showroom to evaluate a JPY 5,100,000 (USD 48,000) car, all we received was a business card of the sales person. They don’t even give you paper brochures. You can look it all up on the website, right?

Before the test drive they took photo copies of our drivers licenses. We were instructed not to take any pictures and to follow the rules of the road. We would be liable for any incidental damage to the car during the test drive. Then we got into the car parked by the roadside outside the showroom, first as passengers, then later taking turns driving it around Akasaka.

I liked the seats, which were nice and firm. The acceleration when you put your foot down is amazing. It feels like a big car but with enough power for its weight. Getting back into the Prius later, it felt quite light by comparison, by which I don’t mean acceleration but it simply feels like a lot less metal being moved around. It tips the scales at about 280 kg less than the base Model 3 (1335 kg vs. 1612 kg).

Some of the controls took some getting used to, such as the lever action of the indicator stalk (which is on the left unlike in Japanese cars) or putting the car into park or into drive with the right stalk. Much of the demonstration involved showing the use of the center screen and its user interface. Many of the functions of the car, such as the electrically assisted steering or the regenerative breaking can be tweaked there, to change the feel of the car.

Headroom in the Tesla was good but personally I don’t much care for the glass roof. In a roll-over accident I would feel safer with a steel roof, but maybe those are not so likely with the low center of gravity afforded by the floor-based battery. The car interior felt overheated when we got into it and no fan was blowing, but I only asked about fan control towards the end of my driving portion. In any other car I would have easily figured it out on my own.

Checking out the trunk and the “frunk” (front trunk) after we got out of the car, the limited access for bulky luggage from the rear was quite a contrast to our Prius, in which we regularly move large items from a DIY center or bicycles for cycling tours far from Tokyo. The Model Y will address that, but it’s also 160 mm taller than the Prius on top of being 90 mm wider like the Model 3. That’s more air resistance and more kWh used to overcome it. That’s one thing I love about the Prius, it offers all this interior space despite being compact and efficient on the outside. 🙂

The width would already make a Model 3 or Model Y a very tight fit in our driveway. We would also have to figure out if there’s enough clearance around the car to plug in the charging cable for overnight charging.

In summary, Tesla’s range of cars is not an easy sell for me as a Japanese customer. While they have great technology, some of the design choices are not a good fit for Japan and the customer experience when dealing with the company (especially given the price range) will not match a lot of cultural expectations.

Size information has finally been released for the Model Y. These are the exterior dimensions compared to my current Prius:

Given the width and height it looks like it has roughly 20% more frontal area than the Prius which will impact its air resistance and hence energy usage at freeway speeds.