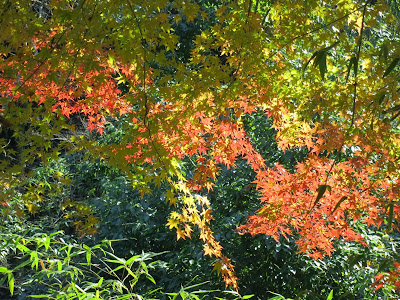 With my nephew’s visit over and a sunny weekend forecast, I wanted to ride some distance again, which I finally did yesterday (196 km with 2234 m of climbing).

On Saturday night I set my alarm for 04:30, still undecided between 4-5 courses. Though I had planned to leave for wherever by 05:30, I didn’t actually head out until an hour later, having checked work email etc. (flexibility is one of the things I like about riding on my own). By the time I was ready to roll I had more or less settled on a clockwise Tsuru toge loop. I had done a similar ride before, but not during the autumn leaves season, and heading out via Wada toge instead of Musashiitsukaichi and the Route 33 tunnel from Hinohara that I took on Sunday.

It felt like the first winter ride of the season for me: Cold air, a constant need to keep warm, but clear skies and many Fuji views to make up for that: 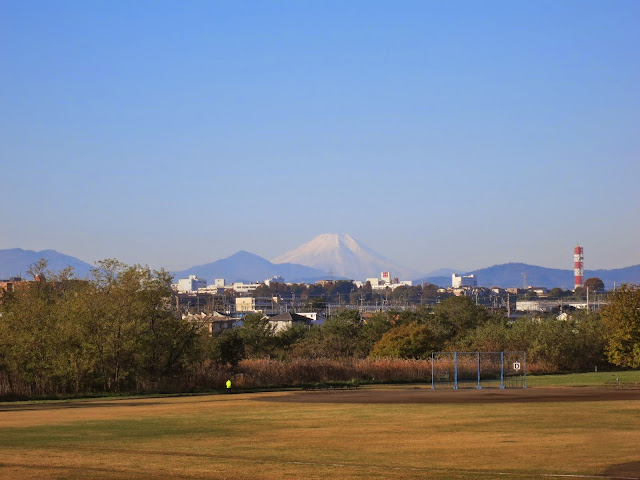 Within about 10 minutes of leaving home, the temperature readout of the navi2coach GPS dropped to 8 C. I was wearing uniqlo long johns and underwear under my long sleeve TCC kit, plus my Bicycle Line “Eternity” winter jacket, winter gloves and my nylon rain pants as an extra layer to keep the legs warm. Somewhere on the Tamagawa I took off the winter jacket and rain pants and switched to the half gloves as the morning sun raised temperatures above 10 C. 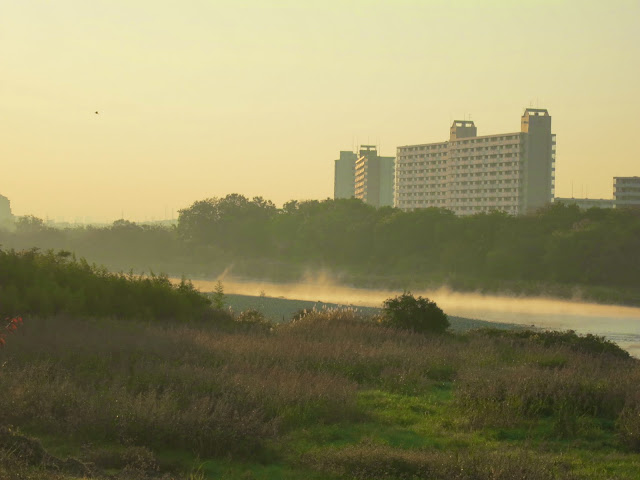 When I wanted to load up the map for @Half-Fast Mike’s excellent Akigawa route from Rt16 to Musashiitsukaichi on Google Maps, I was surprised to get a “No My Maps found” error. Google Maps 7.x.x came out a year and a half ago without the “My Maps” feature. You could keep using it by disabling automatic updates and sticking with 6.x.x, but Google recently announced they would drop support for it, which has now happened. Alas, I’ll finally have to find an alternative for following courses on Android on long rides.

The assistance wasn’t really needed, as I remembered enough from previous rides to get all the way to Musashiitsukaichi without making one wrong turn. I stopped at the new Familiymart one km before the 7-11, as somebody had recently mentioned it favourably. They have a cafe corner with chairs, with wall sockets for charging mobile gadgets. So I could enjoy my caffeine and second breakfast sitting down with a view of the blue sky outside from a place with room temperature 🙂 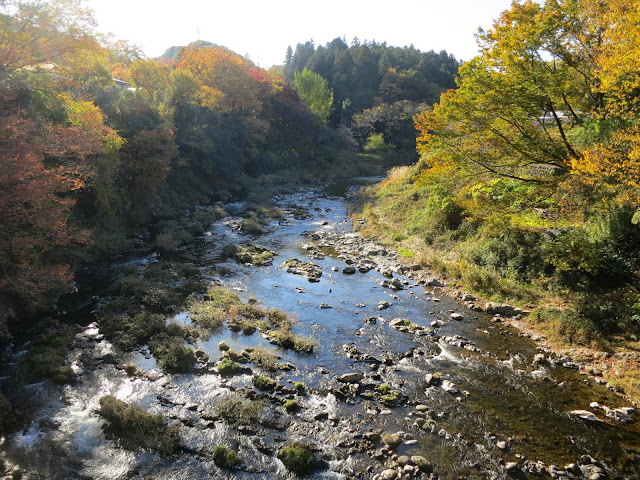 Somewhere around Hinohara I came across a Harley-Davidson enthusiasts’ get together. I took some pictures, was asked where I’m from and was offered to have my picture taken: 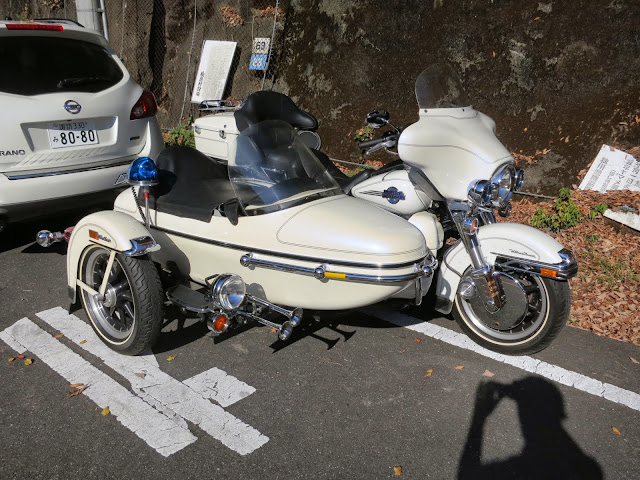 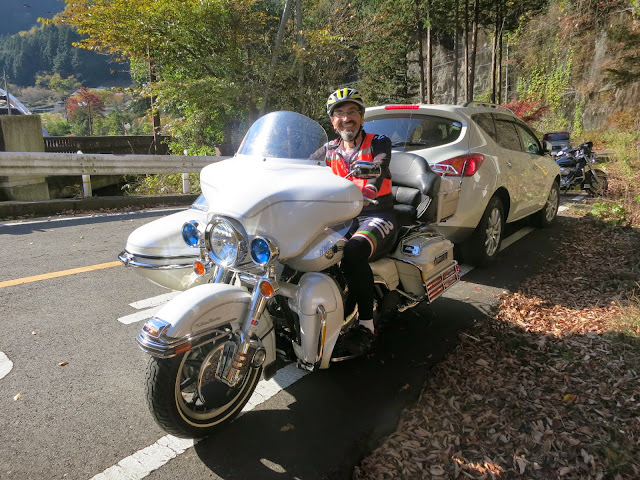 The climb up to the tunnel on Rt33 towards Uenohara was not as long or steep as I remembered it, perhaps because I wasn’t climbing in summer. This is where I passed the first of only two cyclists on the whole 196 km ride who were slower than me (the other one was on the climb from Okutama-ko to Kazahari-toge). 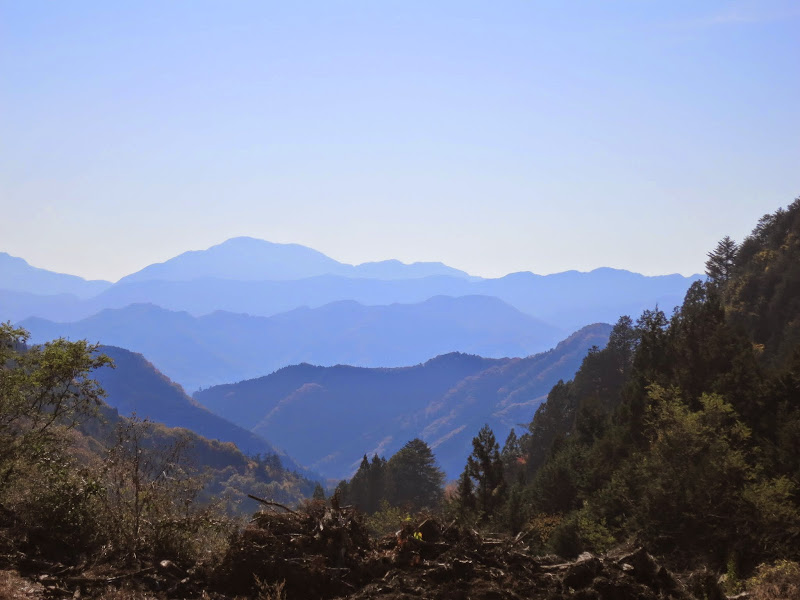 Route 18 to Kosuge village is only 23 km from the junction beyond the tunnel, but it was a very long 23 km, especially the last third. But it was also very pretty and old fashioned. 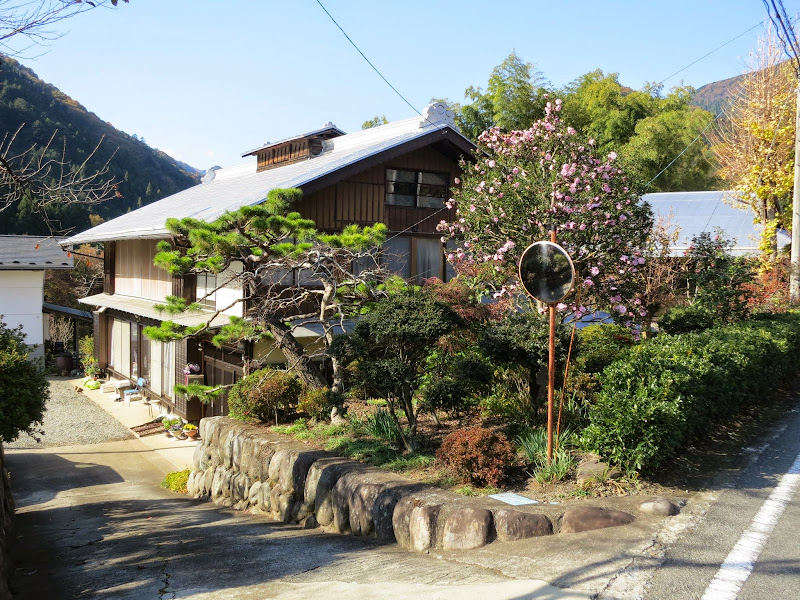 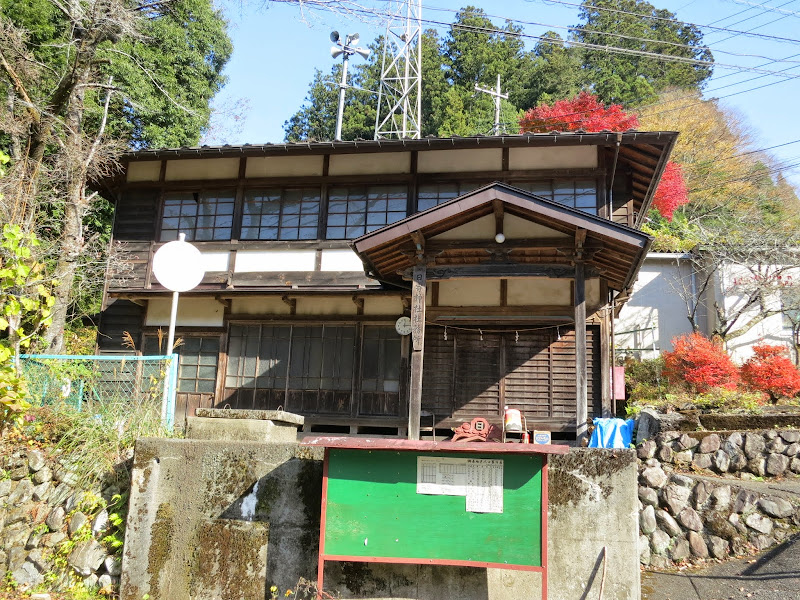 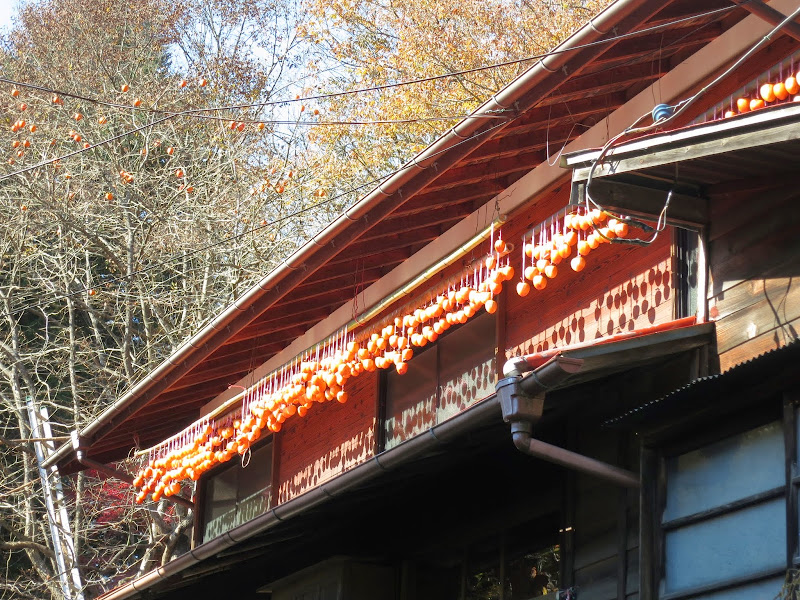 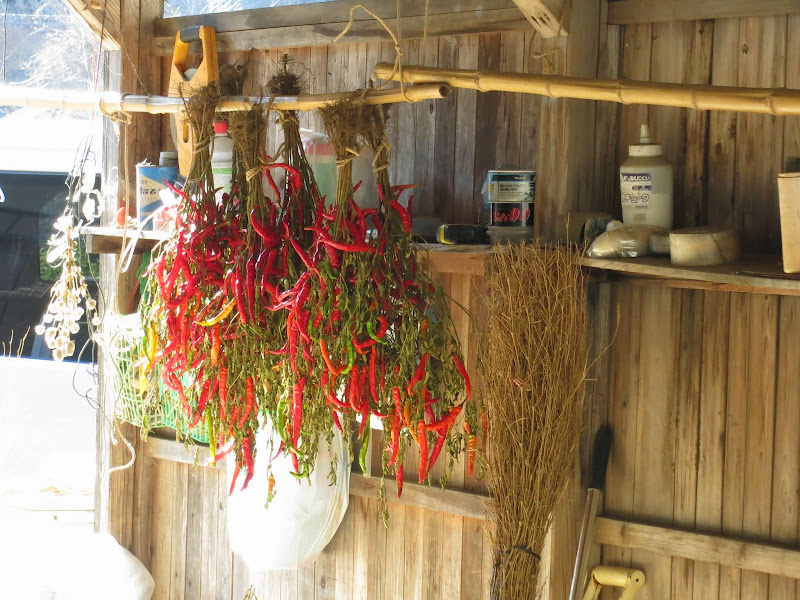 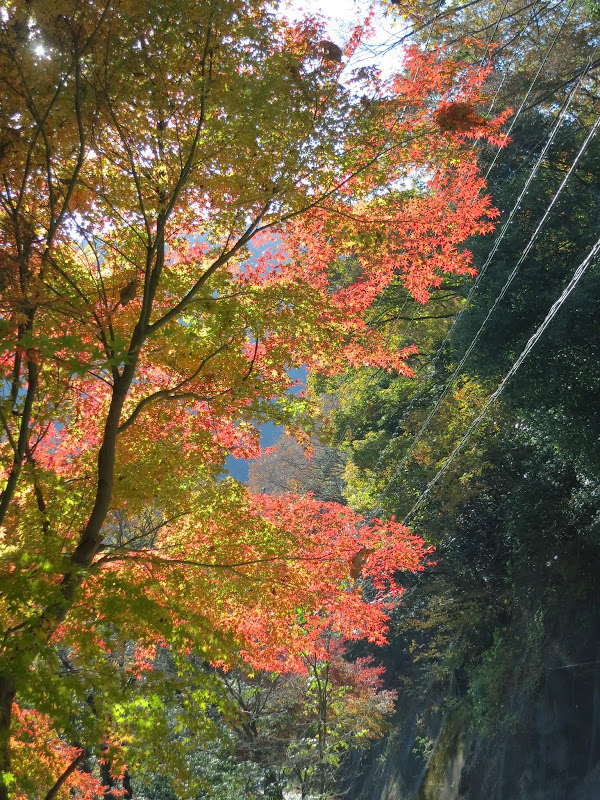 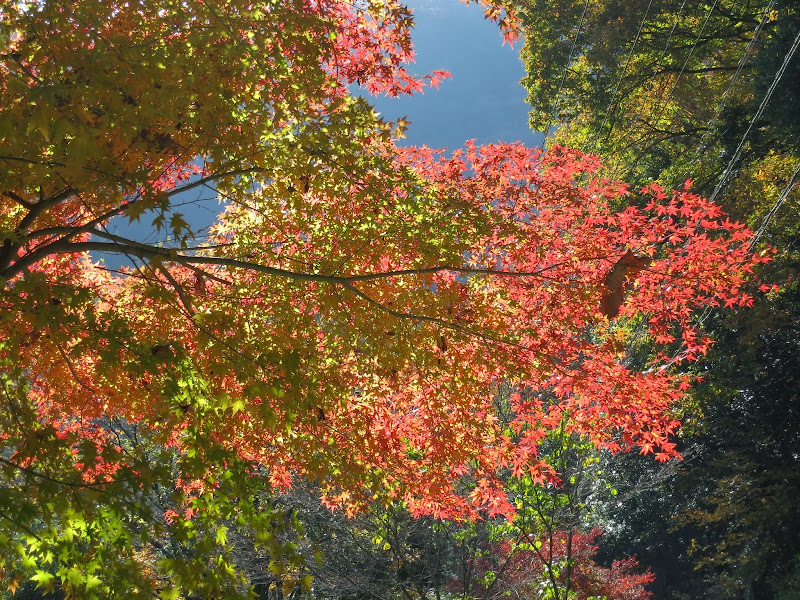 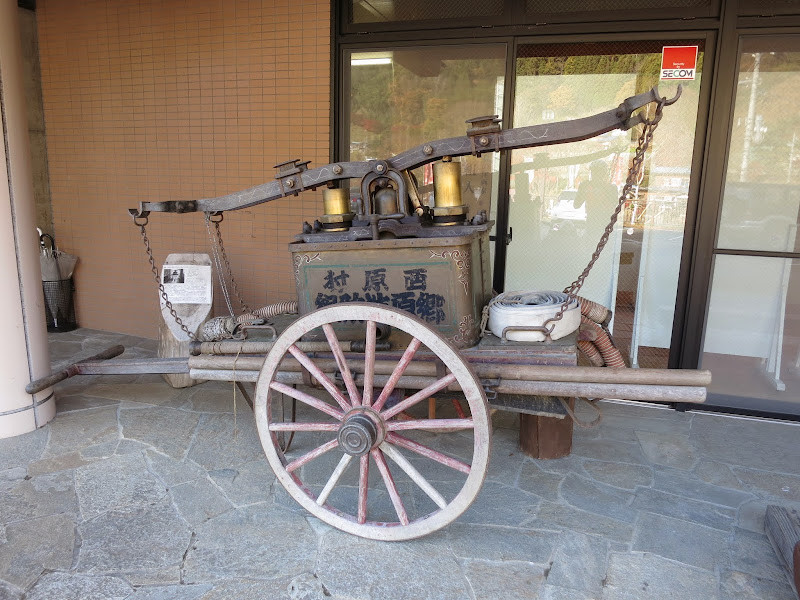 After the repeated climbs and descents to Kosuge village, I knew I was at the half way point. Only one climb to go, even though it was the biggest one. I changed back into my winter jacket for the descent to Okutama. It was only 12 C now and mid-afternoon. I felt tired from the climbing, but it was hard to enjoy the descent to the lake with the chilly air. I was actually looking forward to the next climb to get warm again. 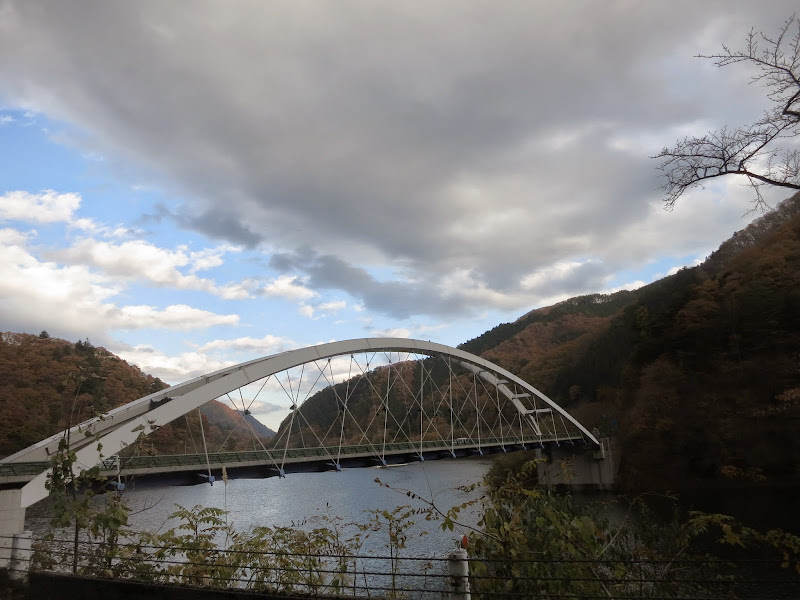 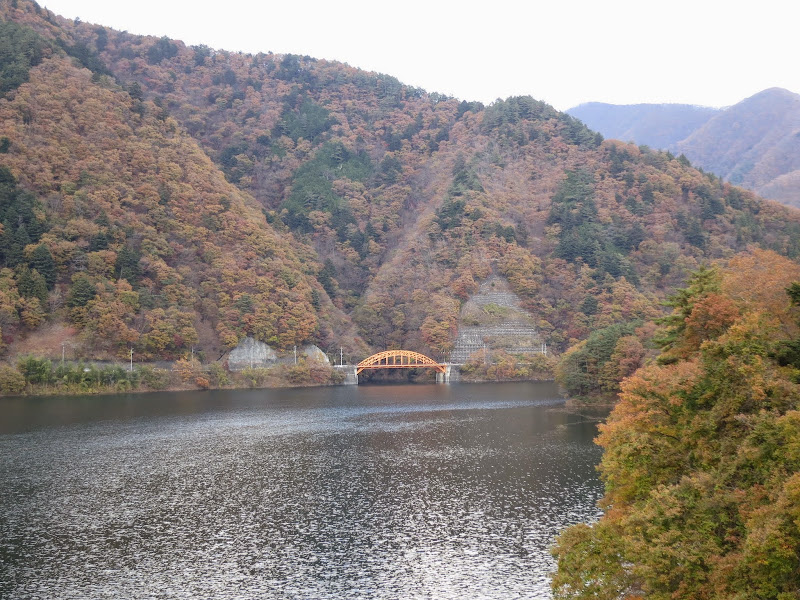 The roads between Hinohara and Okutama-ko are still a playground for weekend racers, by car and by motorbike. 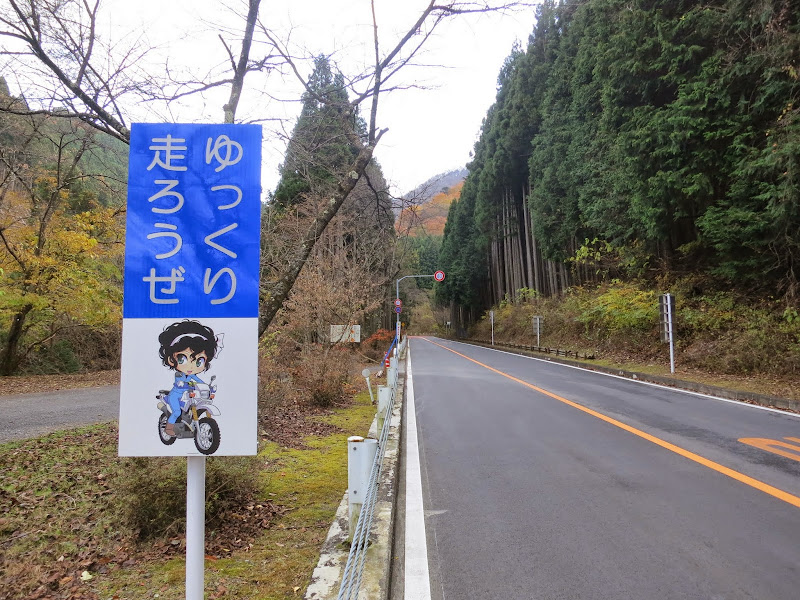 As almost every weekend there was a police speed trap in the forest near Hinohara. On the climb from the lake I passed two police vans with more than half a dozen bikers standing around. On the descent past Tomin no Mori two police cars, then a fire truck and finally an ambulance came up the mountain. I passed two or three spots with flowers by the road side where someone must have died. I think the road gets closed at night to minimize accidents after dark (and related need for emergency vehicle trips).

The 16 km climb from the lake to the summit with over 600 m of elevation gain seemed easier then Rt18, not only because it’s fewer km, but also because it doesn’t go up and down, so you can always feel you’re working towards a known goal, elevation-wise.

I got to the top around sunset: 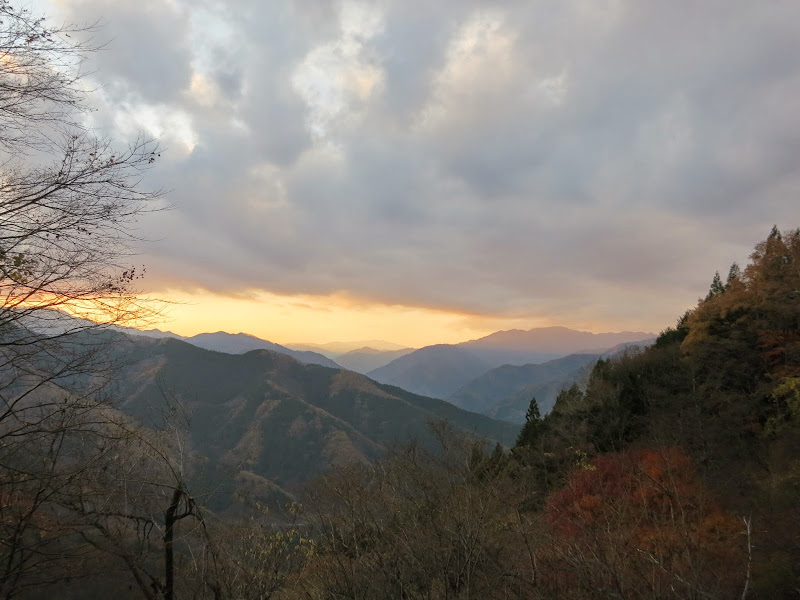 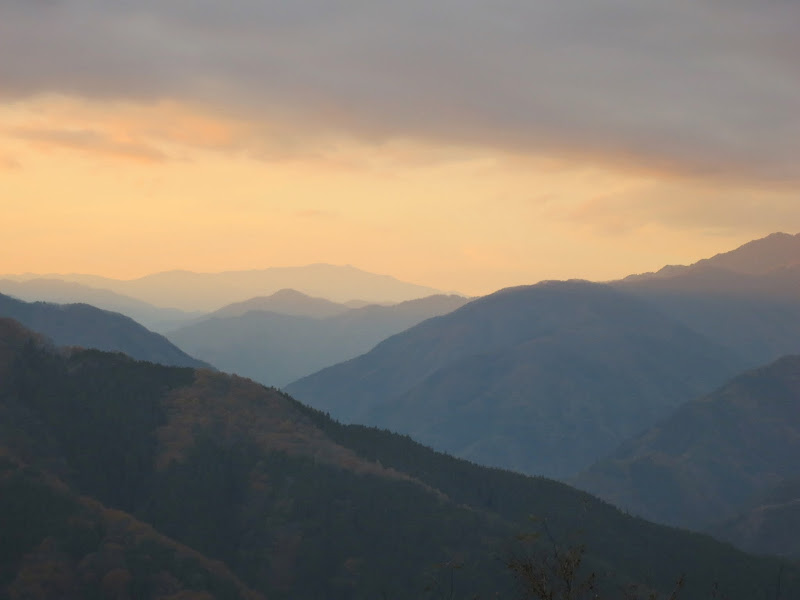 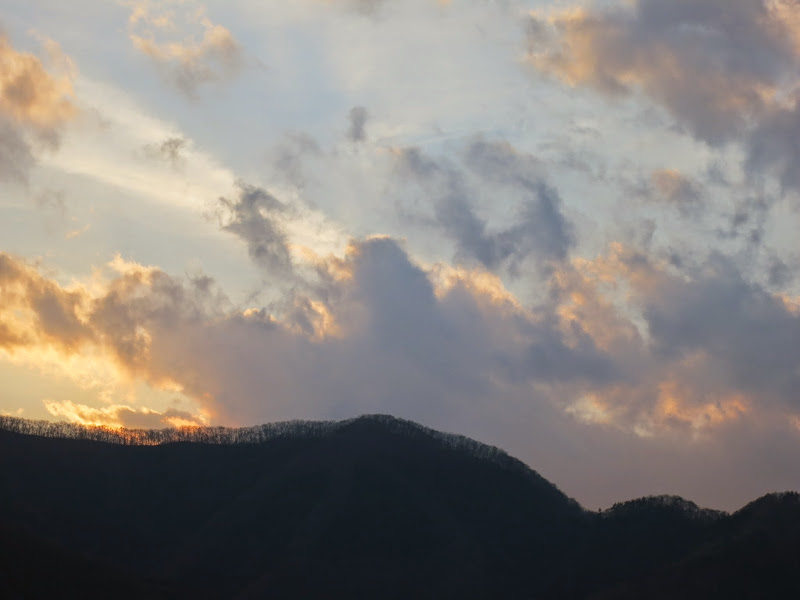 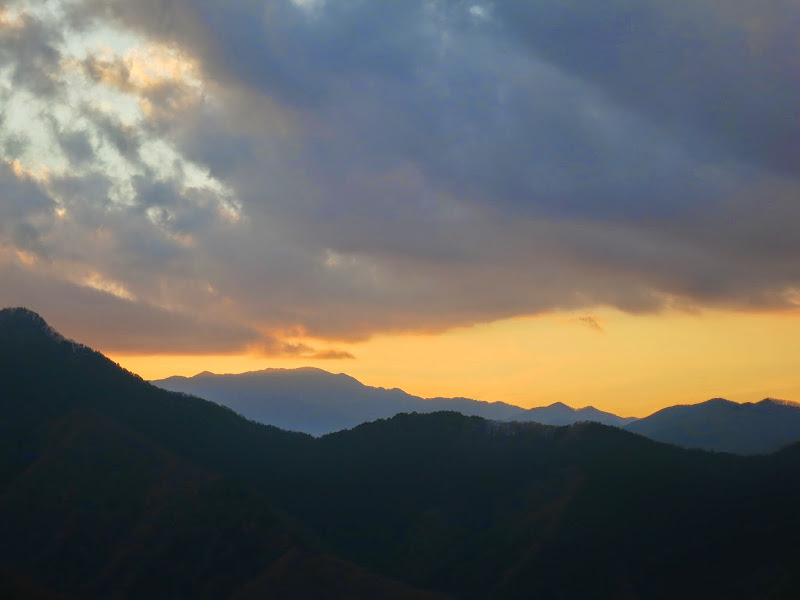 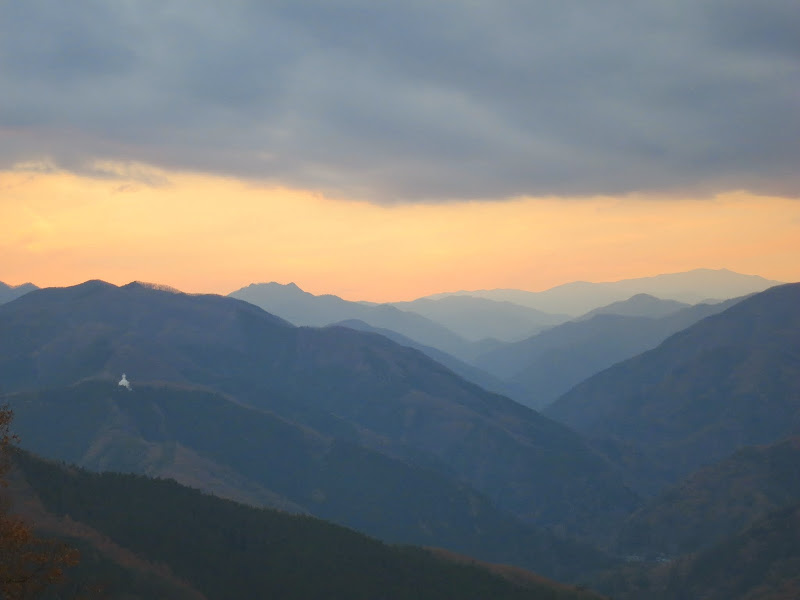 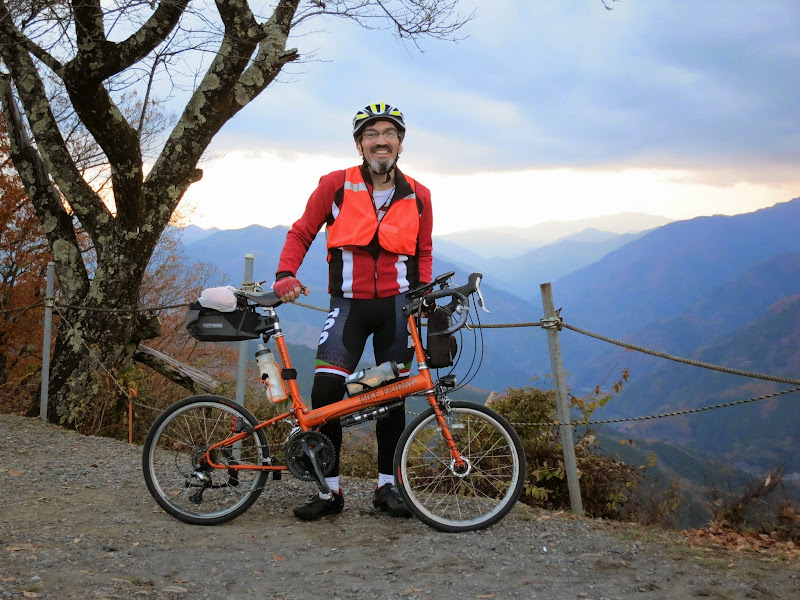 With only 6 C at the top and the sun gone, the descent towards Musashiitsukaichi was long and cold. I wore every piece of fabric I was carrying, but it still wasn’t enough. Finally I made it to the same Familymart where I had had breakfast and grabbed more food and coffee to warm up.

After some rest I decided to miss the scenic Akigawa backroute and simply followed boring Rt7 back towards the Tamagawa. Fortunately it wasn’t too busy that time of the day.

I got back to Setagaya a little before 22:00 and dropped into a local Nepalese restaurant for a curry and naan take-away. Needless to say, I slept really well that night 🙂

A spammer recently sent me the following disclaimer:

Our commercial information messages are sent according to the rules of the new e-mail legislation, Section 301, paragraph a) (2) (c) S Decree 1618, third title, approved by Congress 105th Base of International Regulations on the “SPAM” . An e-mail may not be considered “SPAM” when it includes a way to be removed. (Directive 2000/31 / EC of the European Parliament, Report A5-0270 / 2001 of the European Parliament).

Similar references to S.1618 and Directive 2000/31 can be found in the footer of so many spam emails that the popular SpamAssassin mail filter actually has some rules that recognize spam via mentions of these documents. While these disclaimers turn out to be useful for stopping spam, is there any truth to these claims?

First of all, email spam is defined as unsolicited bulk email. If it is sent to multiple recipients and the sender lacks permission from the recipients, it’s spam — no if’s and but’s. It’s got nothing to do with whether the sender can be prosecuted for sending the bulk email in a particular jurisdiction or not, which is what laws are concerned with.

Any recipient is entitled to use email blocking on computers that they control, regardless of what laws exist to prosecute spammers. The rights of senders stop when email hits your property, your servers and desktops. If you don’t like those unsolicited emails, you shouldn’t be made to pay to store or forward them.

Secondly, the above legal claims are completely bogus. Senate bill S.1618 was drafted in the late 1990’s (so much for “new e-mail legislation”) but was never passed into law. As for the above EU document (“Directive on electronic commerce”), it neither explicitly mentions e-mail nor spam in any way.

When spammers include disclaimers like the above in their emails, they’re either clueless or they lie. But then that’s not exactly news, is it? 🙂