After Google announced its new privacy policy to take in effect on March 1, 2012, some people announced their intention to cancel their Google accounts. In a Washington Post online poll almost 2/3 of readers said they would cancel their accounts due to privacy changes. My answer to that is: Oh, really?

Despite what the self-selecting samples of voters on that straw poll suggests, I doubt we’ll hardly see any significant response to the new policy. It won’t even be a blip on Google’s radar screen. I think it is safe to bet that most users of the Google+ service also have Facebook accounts, whether they use them much or not. Facebook and its history of data privacy (or lack thereof) is not exactly a benign alternative to anything Google offers. I can not see people stop using Youtube, cut themselves off from their Gmail accounts and switching to what, Yahoo or Bing for web searches? The fact remains, Google may not live up to its “do no evil” credo at all times or forever, but most of us have even less confidence in companies like Facebook or Microsoft.

Google’s move is all about more clicks, i.e. more advertising revenue, which is their life blood. If they can show better targeted ads on web searches based on what you write about in Gmail or watch on Youtube, that’s more clicks that their advertisers pay for.

What worries me is if their data gets opened to the NSA, police, etc especially under the loose rules of something like the Patriot’s Act. Inside the US the constitution has been eroded further and further over the years, while its protections have never applied to most fellow humans who do not happen to be US citizens, as far as the US government is concerned. That is not a problem specific to Google latest move though. It’s something that ultimately only US voters can solve.

Last weekend I did my first real winter hike, up Mount Daibosatsu (2057 m) near Enzan in Yamanashi prefecture, Japan. 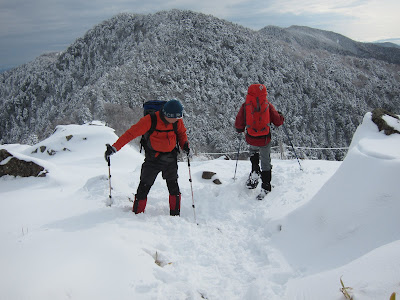 Last year I did two hikes on Daibosatsu with friends, but on Sunday we went back for a mid-winter hike in the snow. It’s a longish train ride from Tokyo to Enzan, where we caught a 30 minute bus ride to the foot of the mountain. In winter many of the mountain roads may be closed due to snow, so we had to hike two hours just to get to a hut which in autumn served as a bus stop for our hike then.

Because it had been raining or snowing for two days, I was wearing rain gear on top of several layers instead of the usual trousers and winter jackets. I bought a pair of crampons (Evernew EBY015 L, 6 pin, L size) as recommended by a friend, which worked really well on the snowed in mountain. There were about 30 cm of snow in the higher regions.

We left Tokyo by Odakyu line before 05:00 and got off the bus near the mountain around 08:00. After about half an hour on roads above the village we put on the crampons for the snowed in trails and forest roads. Around noon we got to the ridge (Daibosatsu-toge, 大菩薩峠) and had lunch, then headed on through the deep snow to the top to enjoy the view and take pictures. Tellingly, the only other hiker we encountered up there was wearing snow shoes. With everything covered in snow and no other sounds except for some wind, the echoes from the mountains were amazing. 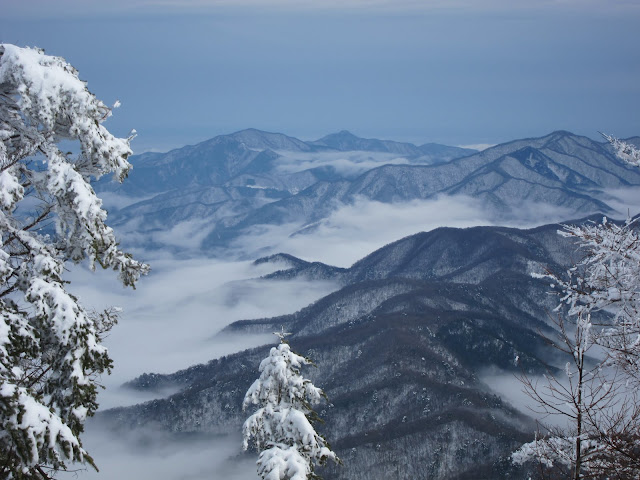 Mount Daibosatsu was one of my favourite hikes last year because of its views, but this last hike was very special. Fog was sitting in many of the lower valleys all around us while all the trees were covered in thick white snow that everything had a January calendar picture feel to it, but the best was Mt Fuji. I told my friends, I would have hiked the whole 18 km for the views of Mt Fuji alone. Somehow it seemed bigger or closer than ever and the light that surrounded it was magical. 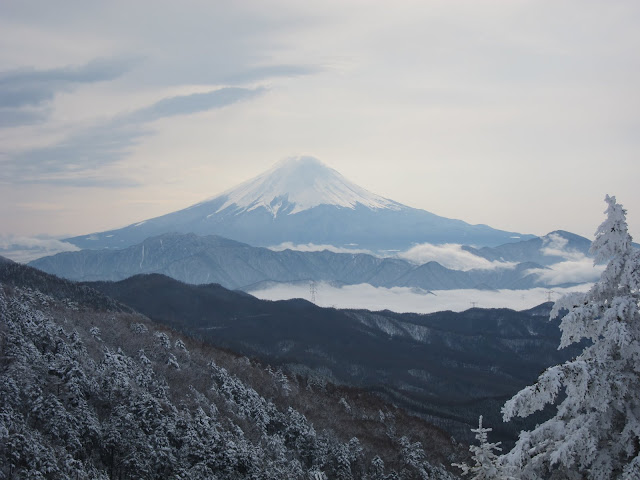 Descending was much easier than climbing, as the snow acted as a friction brake. We descended in 2 1/2 hours versus 4 hours for the climb. We enjoyed food and drinks at a restaurant at the bus stop in the company of two other hikers. I am sure this won’t have been my last hike to Mt Daibosatsu. 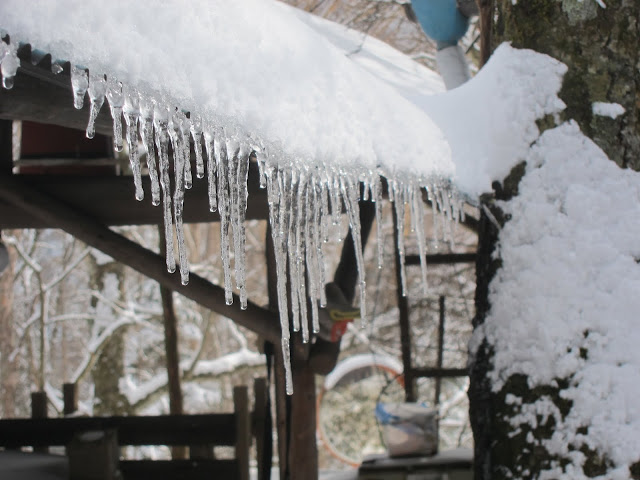