One year while I was in high school I cycled a total of 7500 km over 150 days (May through September), maintaining a daily average of 50 km. I lived 22 km from my school, so if the weather was OK I could get 44 km of exercise by just skipping the bus. My longest rides then were 160 km and a few days later, 220 km in a day. I had quite a few 100 km days. I’ve always preferred slowish distance rides to fast but short rides. 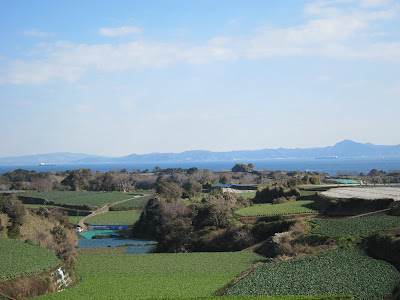 Recently I’ve done two rides around the beautiful Miura peninsula coastline south of Tokyo in as many weekends, each time setting a new personal distance record since resuming road cycling in October. Since buying my foldable road bike (Bike Friday Pocket Rocket), I have gradually increased my distances. I’ve been aiming for a minimum of 100 km total per week, which is fairly easy to achieve if I have at least one long ride on the Saturday or Sunday.

On November 12 I first used my bike bag for trying out the Half-Fast Cycling (HFC) Miura route on my own (58 km). Four weeks later, on December 11 I did my first ride over 100 km by combining the 60 km HFC West Park Cruise with trips to and from the meeting point in Roppongi and around Setagaya.

On Sunday, Feb 5 I joined James’ Miura “long slow distance” (LSD) ride of 140 km. I ended up doing 136 km in total. This was much tougher, mainly because the first quarter (until I dropped off to continue on my own) was quite a bit faster than I was used to. These Tokyo Cycling Club riders really are something else! But it taught me to start riding early in the morning and showed me some of the routes. 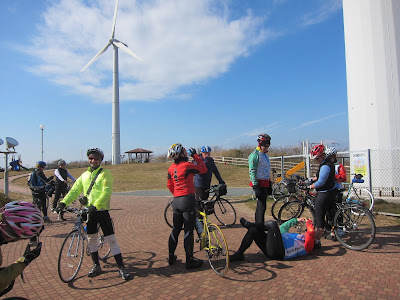 On Saturday, Feb 11 I joined the 58 km HFC Miura ride to visit Sarah Outen who is cycling and rowing around the world. I left home at 6:30 and arrived at Keikyukurihama station near the southern tip of Miura around 10:05 (66 km), a little after most others had arrived by train. The ride was great fun. The speed suited me perfectly. We took many quiet back roads and there were a good many hills. It was my first HFC ride with other folding bikes, as Jose cycled down 59 km from Yokohama on his Bike Friday Pocket Llama, on which he had cycled two weeks across East Tibet last year. There was also one cyclist on a Dahon Vector x27h. 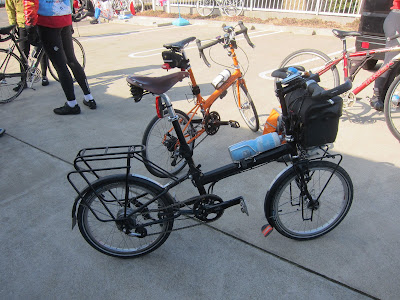 After lunch and photos and a visit to the boat yard where Sarah is preparing for her Pacific crossing by row boat, Jose and I cycled up towards Yamato City. Unfortunately about 30 minutes into the ride I had a crash, but chose to continue despite some blood and bruises. Two hours later Jose and I arrived in Yamato in darkness. He rode home from there while I folded the bike at Yamato station and returned to Setagaya by train with the bike in the bag. The bike is OK and hopefully next week I will no longer look like I got into a bar room fight. Despite the incident the ride was much easier than the previous one. This time I stopped just short of 160 km (an imperial “century”), but I want to go further and go for 200 km. This will get easier as the days get longer and longer with Spring. I just have to keep training. Set off early in the morning, stick to a pace you can sustain and keep going! 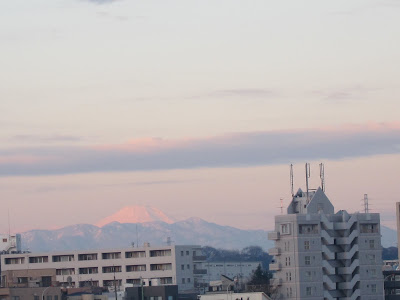 I am now 9 kg lighter than I was a year ago, still losing a kg a month and I hardly even worry about how much I eat: I burn it anyway.