My wife and I have received both of our shots, three weeks after the first shot. In not quite two weeks we will be fully vaccinated.

The first shot triggers an immune system reaction that produces antibodies against the spike protein of the virus. After about two weeks, the immune system also produces Memory T cells, which are its way of remembering how to make more antibodies should they be needed again in the future. After three or more weeks, when the second dose is given, it puts those newly formed T cells through their paces, boosting the antibody levels.

According to the latest published numbers for Tokyo, the more infectious Delta variant already causes more new cases than all other strains of SARS-CoV-2 combined and is most likely to completely displace them soon. This is part of the reason why the reproduction rate of the virus has been increasing for several weeks, with weekly averages of new cases growth accelerating from under 20 percent a week to over 50 percent recently.

Now it is crucially important that more people get shots as soon as possible. Not all prefectures and municipalities in Japan have made the same use of the vaccine they have received from the central government.

Tokyo has the questionable distinction as the prefecture with the largest portion of unused vaccine doses, even though people are desperate for vaccine appointments. By Sunday, July 25 Tokyo had received 15,227,660 doses. According to the Vaccination Recording System (VRS), 4,081,931 of these doses had been used as first doses and another 2,380,397 as second doses, for a total of 6,462,328 – just over 42 percent of the total. That means about 8.8 million doses either have not yet been reported after use or they’re still sitting in freezers, earmarked for shots that are weeks away.

The basic supply of future vaccines are going to be about 1.3 million doses every two weeks distributed to the municipalities in Tokyo by population by the central government and another 320,000 or so allocated to the prefecture to give to the cities that need extra supplies the most because they have the smallest stocks.

This would actually mean that unused stocks in freezers grew, rather than being shrunk to vaccinate as many people as early as possible to protect them against the Delta variant. Vials in freezers do not protect against illness, only shots in arms do.

However, it is also possible that the recent 4-day long weekend (Thursday, 7/22 through Sunday, 7/25) caused bigger than usual delays in the VRS reports, in which case the actual results of vaccine use could be a little better than these numbers appear to show.

Daily vaccination statistics published by the Cabinet Office of the Japanese prime Minister suffer from lag problem: They are not reported back to a central database the day the vaccinations take place. This has the curious effect of making the published chart of daily first and second shots always trend downwards for the most recent 7-120 days or so. 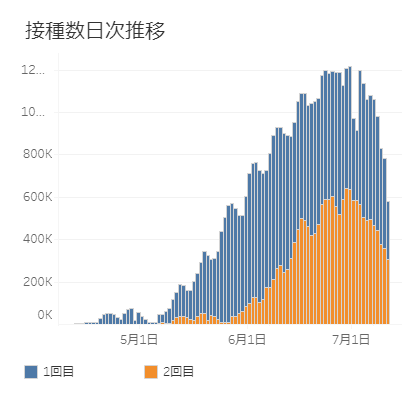 There is a relatively simple way to compensate for the under-count: Its ratio is consistent between first and second doses. In Japan first and second doses for Pfizer are almost religiously spaced 21 days apart. Thus by looking at the first dose count 21 days earlier one can get a close approximation of the real second dose count for a given date. The ratio between the published incomplete second dose number and the approximation derived from the more accurate first dose count can then be applied to the 1st dose Pfizer count for the date you’re looking at. Those two numbers plus the Moderna numbers (which are not subject to the same delays because of the way the SDF sites — the main consumers of Moderna doses — are operating) then give you the real up-to-date General Vaccination count 🙂

After July 3, first doses pulled ahead again, as many municipalities had sent vaccination tickets to people with medical conditions or younger then 65 years. The overall total seems to have largely stabilised at 1.1-1.2 million doses a day.

During July, August and September, the government will distribute a basic allocation of 8,000 boxes (9.36 million doses) every two weeks plus an “adjustment” of 2,000 boxes (2.34 million doses) that will go to municipalities with the best progress in using their allocated doses. This is pushing municipalities to update data on VRS more quickly, as this will be the metric used by the government to allocate the “adjustment” doses. The basic allocation is based on the number of residents age 12-64 in each municipality (the amounts for age 65 and above have already been fully distributed).

One potential problem with this is the fact that some local clinics have been vaccinating people who did not have a vaccination ticket with bar code yet, making this portion of the vaccination total hard to track. The doses have been allocated to the municipalities but may appear unused in VRS.

The sky is not falling and Japan is not about to run out of vaccine any time soon. There is enough vaccine already in the country (either in national government freezers or in municipal/local clinic freezers) or scheduled to be delivered at regular intervals over the next 3-4 months that Japan will be able to vaccinate all of its residents age 12 and above by the end of November. Pfizer/BioNTech shipments run until October, Moderna shipments until September. Japan can maintain a rate of about 1.4 million doses a day (i.e. higher than now) until the final month, when mostly only second doses will be needed and the pace could drop by half from the peak. All this while not even tapping into its supplies of 120m doses of AstraZeneca, of which it is giving away millions to Taiwan (2x), Malaysia, Indonesia (both July 1), the Philippines (July 8) and Thailand (July 9) so far and undoubtedly will give away a lot more.

Nevertheless the media report about local governments cancelling or postponing reservations due to vaccine shortages, while the government blames some municipalities for hoarding vaccine instead of using it. What’s behind all this?

The Japanese government wants municipalities to use all Pfizer doses as soon as possible. They allocate doses for every city and prefecture for every two week period. Pfizer vaccination takes two doses at least three weeks apart. According to Minister Kono, second doses should be taken from later shipments than first doses, as he made clear in a June 1 interview. Instead, municipalities treat first and second doses like Siamese twins, allocating them from the same source and keeping the second in a freezer for 3 extra weeks. That causes artificial shortages down the road, just like back when everybody tried to keep three months worth of toilet paper in stock at home.

By the end of June the government had distributed 78 million doses, more than enough doses for all people aged 65 and above to be completely vaccinated, priming the pipeline. After the allocations in May and June, extra doses were to continue being shipped in allocations every two weeks.

In many places the 65+ group won’t finish vaccinations until the end of July, so first doses will have finished for them around July 10 after which second doses will continue for another three weeks. Once the number of first doses for 65+ has reached a peak and then decreases, first doses for the next groups (people with medical conditions, 60-64, 50-59 etc.) can take over the next vaccination slots using the supplies in stock at that time. This phase would start no later than July 10.

Where the problem arises is that municipalities have this fixed idea that second shots for 65+ in July should still come from the original May/June shipments, kept waiting in a freezer until then, instead of from July shipments.

For example, 65 year old person A gets his first shot in the 4th week of June. The second shot will be due in the 3rd week of July. 60 year old person B wants to get her first shot in the first week of July, after the city has finished first shots for the 65+ group, and her second shot in the 4th week of July. The smart thing would be to let person B go ahead since enough vaccine is still in stock from June. More will arrive in allocations in the first and second half of July and both A and B will get their second doses in the 3rd and 4th week from that fresh supply. Instead what the cities are doing is to reserve the June stocks exclusively for the 65+ group, letting it sit in a freezer for a month while keeping person B waiting to make her reservation only after sufficient July shipments have come in to cover both of her first and second shots. That’s what the 40 million unused doses cited by the government and the cancellation of vaccinations due to “insufficient supplies” as per the mayors is about.

It doesn’t really make sense to let vaccines sit idle while keeping unvaccinated people waiting for their shots. Vaccine should go into arms as soon as possible to protect people against sickness and death.

We’ll be getting our first shots on Monday, about two weeks after we received the tickets to be able to make a reservation. I am excited! Vaccinations are our best chance to push the reproduction rate of the virus below 1, despite the spread of the more transmissible Delta and Kappa variants (B.1.617.2 and B.1.617.1) that were first sequenced in India late last year. Right now it looks like these variants are rapidly replacing the Alpha variant that arrived from the UK earlier this year and will have largely done so by the opening of the Olympics three weeks from now.

Setagaya, the ward of Tokyo where we live, suspended its reservation system for a couple of days to perform an upgrade. Now that it has come back online, they have also extended the time period until when you can make reservations from the end of August to September 21. They will revisit it again after watching how many individuals will get vaccinations through their universities or workplaces starting from this month.

Looking at the September overview of open slots (which we can assume to be close to the pre-booking state) it seems the mass inoculation sites run by the city are designed to handle about 33,500 shots per week. All sites have some days off (presumably for the staff), but all are open Saturdays and Sundays to make it easy for people to get vaccinated without taking off time from work or schools.

Besides the mass vaccination sites people can also go to local clinics. Appointments there are mostly not done through the municipal reservation system. I have not seen any data yet on how many people are choosing their regular clinics vs mass vaccination sites, which makes it hard to get an accurate view for progress in Setagaya.

The earliest available mass vaccination slots listed right now are about 3 weeks from now. By July 20 vaccination tickets will have been mailed out to the rmaining population aged 16-59, with children age 12-15 added at the end of the month. Assuming the vaccination capacity for July 1-21 is comparable to the empty slots in September (1-21) then about 100,000 shots can be given over these three weeks, while about another half a million people will get tickets allowing them to make appointments to get two shots each. This will presumable push the available dates months into the future. The big unknown for me is how many shots the local clinics will handle.