I have ordered a second bike, an Elephant Bikes National Forest Explorer (Elephant NFE). I wanted something with enough clearance for wider tyres and mudguards as well as disc brakes. I was looking for a light and lively frame for fast, comfortable rides (not planning any heavy duty touring). Lots of cyclocross (CX) bikes would have fit that bill, but none have low trail geometry like classic French randonneurs or my Bike Friday. Elephant Bike’s unique low trail disk fork is really what attracted me. The frame set is hand-made by bike builder Glen Copus in Spokane, WA. 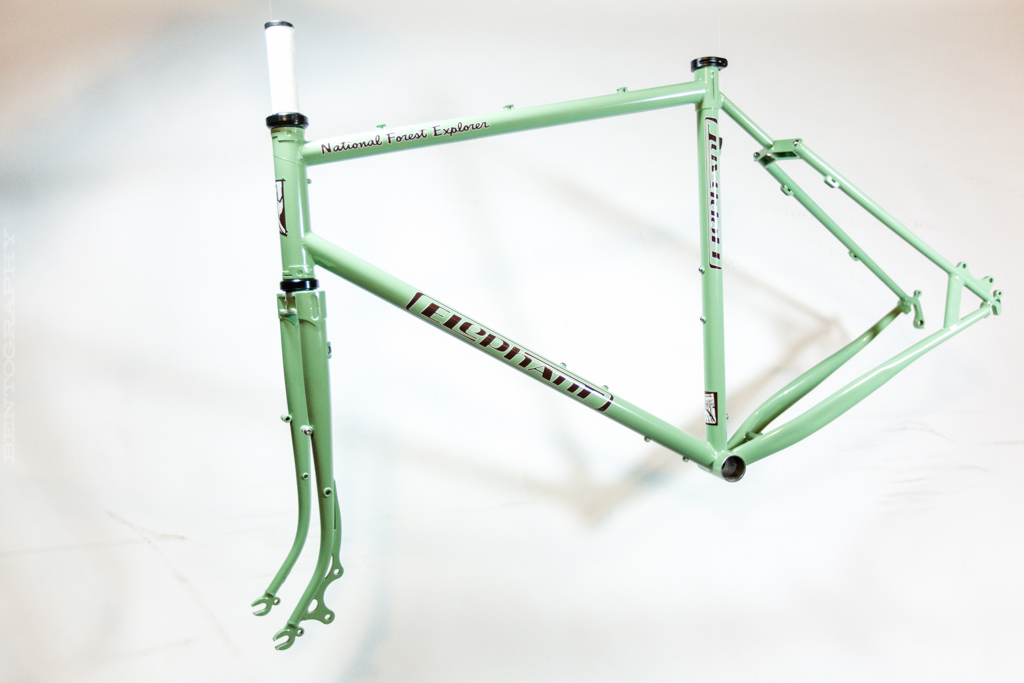 The virtue of versatility
The Elephant NFE is probably one of the most versatile bikes around. I like versatile: My current Bike Friday Pocket Rocket, on which I’ve done about 30,000 km in less than 4 years, has served me well for anything from grocery shopping at the supermarket to 600 km randonées in the mountains of Japan. Road bikes optimized for racing on the other hand do well at exactly one purpose, racing. That’s something I’m not really interested in.

In an interview with Bicycle Times, Jan Heine (Bicycle Quarterly) contrasted the versatility of cars with more restricted designs on modern road bikes:

You buy a Porsche today, you can take it to the racetrack if you want and at the same time it’s fully equipped to drive to the office, you can get groceries on the way home, you can even take your girlfriend or wife to a resort, you can do all those functions in one car. On a racing bike, where are you going to put the groceries?

My idea of cycling is mostly one day touring. I ride to see places. I also love to take pictures of the places I visit. I often use the bike for distances that many people would use cars for, unless I have passengers. I don’t want to be restricted to daytime riding or clear skies or smooth roads or only part of the year. This goes back a long time: The first bike I bought as a 17 year old had mudguards and a rear rack. During one 5 month stretch in high school I put as much as 7500 km on it, including one solo ride of 220 km.

These days my threshold for a long ride is 160 km, a “century” distance. I don’t want to carry more luggage than I need in 24 hours, but but when you ride a whole day and go from sea level to half way up Mt Fuji and back, you need more stuff than fits in jersey pockets. I dislike heavy backpacks on a long ride. Therefore my idea of the ideal bike is not a race machine but a general purpose tool. My Bike Friday comes pretty close.

One thing I didn’t like about my current bike was brake performance in the rain. In June 2013 I rode home from the epic “Otsuki 4.5” mountain loop when I got caught in a massive downpour on top of Matsuhime (1,240 m). The Matsuhime descent in the rain on a 15% grade with wet rim brakes was no fun at all. Also I’ve had too many white-knuckle moments braking in traffic in the rain, when the calliper brakes first have to wipe the water off the rims before they they start biting on the next rotation. Disc brakes work in any weather and that settles it for me.

The search for another bike
Three and a half years ago I bought my first road bike in many years, a Bike Friday Pocket Rocket. This drop-bar road bike has 20″ wheels and folds small enough to pack into a regular size suitcase. I’ve been very happy with it, riding it through all seasons and putting three times more distance on it than I put on my car (a 2008 Prius). For both 2013 and 2014 I averaged more than 750 km per month and that’s even without a commute (I work from home). In March 2012 I signed up for a 300 km brevet three months later, then did three training rides of about 200 km for it. It was the first of many brevets. Except for August 2012 I have done at least one ride of 160 km or more every calendar month since March 2012 (a 33 month run from September 2012 to May 2015). In September 2013 I rode 574 km when trying my first 600 km brevet while in April 2015 I successfully completed a 400 km brevet.

Over these years, many people have suggested to me that I would find it easier to complete brevets or to keep up with other cyclists in group rides if I were to ride a 700C bike instead of my Bike Friday. I beg to disagree. The Bike Friday has actually been more comfortable than many conventional road bikes. Especially with 20 x 1 3/8″ (ETRTO 37-451) tyres at lower pressure, the bike vibrates less then narrow 23 mm road tyres pumped up to maximum pressure. The dynamo hub lighting, mud guards, Brooks saddle and the smart phone holder for easy navigation all help with long rides at all hours in any weather. It has been an extremely versatile and practical bike.

I have tried the 700C carbon road bikes of my wife and my son. I also tried a titanium bike lent to me by my friend Tim of GS Astuto. Yes, these big wheeled bikes roll more smoothly over speed bumps and other surface irregularities and they were lighter, which helped on many hills, but their gearing is also much higher, which is tough on really steep climbs. Due to the smaller wheels of my bike, the gearing of my road triple (50/39/30 chain rings + 11-28T cassette) works out more like that of a mountain bike (44/32/22 + 11-28T). The lightest gear of my son’s carbon road bike with compact crank is almost 50% heavier than my lightest gear. It’s actually heavier than the lightest gear on the middle chain ring of my Bike Friday triple.

Heavy gears are not only a problem when I get tired towards the end of a 13 hour ride. I also find that when I grind higher gears with more torque at lower cadences I may go faster, but I often pay for it with knee pain afterwards. I don’t really want to take any chances with my knees, as I intend to keep on riding into old age. Knee pain has been the reason I stopped running. I don’t want it to end my cycling.

I found the gear range of 22-92 gear inches on my Bike Friday perfect for me. I don’t need any gears for pedalling faster than 45 km/h, as on a long ride I rarely even do as much as 30 km/h on the flat. However I will often encounter steep hills that I can only crawl up at 6 km/h. Low gearing lets me do that at 60 rpm while still seated and my knees will thank me for it.

So while I was looking for possible new bikes with disc brakes or other nice features, the question of how to keep my low gearing prevented me from going for most off-the-shelf bikes. I would have to start from a frame set and add components that will work for me.

Low trail geometry
I had noticed that the steering on my Bike Friday felt different from 700C road bikes and put it down to the difference in mass of the wheels. The steering of the Bike Friday felt quick, but at the same time it didn’t seem affected as much by sudden gusts of wind from the side. To me it felt like the Bike Friday was easy to control via the handle bar input whereas the big bikes responded more to the rider shifting his weight around. I started reading about Jan Heine and his rediscovery of mid-century French randonneur bikes with low trail geometries, which work well for front-mounted loads. Their steering was supposed to feel like that. Then I found out that the Bike Friday, by virtue of its short fork, also had low trail geometry. That made me very curious about low trail road bikes.

As if finding a road bike with low gearing that was neither a heavy touring bike nor like a mountain bike wasn’t difficult enough, I started looking around if anyone made a bike with low trail geometry that also offered disc brakes, my primary reason to look beyond the Bike Friday. For months I didn’t come across anything. Many low-trail proponents are also sceptics with regards to certain bicycle innovations. For example, Jan Heine still uses a 5-speed freewheel like I did in the 1970s and doesn’t use integrated shifters (e.g. Shimano STI).

A couple of months ago I came across an article by Alex Wetmore in which he described a custom-built low-trail fork with traditional bend but with disc brakes.

Then a couple of weeks ago I came across a mention of a 650B bike with disc brakes in a comment posted on Jan Heine’s blog (https://janheine.wordpress.com/2015/04/04/the-enduro-allroad-bike/), called the Elephant National Forest Explorer. I googled the bike. The fork in the first picture I came across looked exactly like the one I had seen on Alex Wetmore’s blog. That was because builder Glen Copus based it on Alex’ proven design when he built an NFE for Fred Blasdel.

The next day I sent an email to John Speare of Elephant Bikes. He told me they were going to do another production run in a couple of weeks. A week later I got an email that they were taking orders now. It was an easy decision: There is no other bike like it. I sent my deposit the next day. I will probably get the frame and fork in August and hopefully start riding the bike in September.

Planning the build
I still haven’t decided how to get my low gears, but it will have to work with Shimano STI so I can shift and brake from the same hand position for urban riding. The choice is between a compact plus double crank (e.g. 42/26), a touring triple (e.g. 46/34/24) or a road triple with large cassette (e.g. the new Tiagra 4703). Either of those will give me the gears I need.

The plan is to build up the NFE with a dynamo hub (Shutter Precision PL-8), a Brooks saddle (B17), a porteur front rack with a bag and some supple, wide 650B tyres such as the 42 mm wide Compass Babyshoe Pass EL.

A front rack gives easy access to items you need during rides without having to dismount. Since the weight rests on the normally much more lightly loaded front wheel it doesn’t require beefing up the whole frame as in typical touring bikes. Thus you get both load carrying ability and a light, fast frame – a perfect combination.

Stay tuned for the first ride reports later this year 🙂