The dekopon season will be coming to an end soon, but to compensate the shorts-and-short-sleeves season has started! I enjoyed both on Saturday, buying local dekopon (4 big juicy ones for 300 yen) in West Izu. The roadside stand worked on the honour principle: I dropped my coins into the collection box and took one bag of fruits.

I was the only rider in shorts at the start of the 2019BRM330 200 km brevet in Mishima, out of 13 who had shown up, out of 30 who had signed up, the others having been put off by a weather forecast that predicted a high chance of rain in the evening. I drove to Mishima on Friday night with the Elephant Bikes NFE in the back of my Prius and parked the car in a coin parking lot (700 yen for 24h). I stayed at the Toyoko Inn, which was also going to be the goal of the 203 km ride which started at Mishima station. There were 2 courses, the hilly Matsuzaki course and the insanely hilly Darumayama course. I had tried and DNFed the latter in 2017, so it was Matsuzaki again for me. 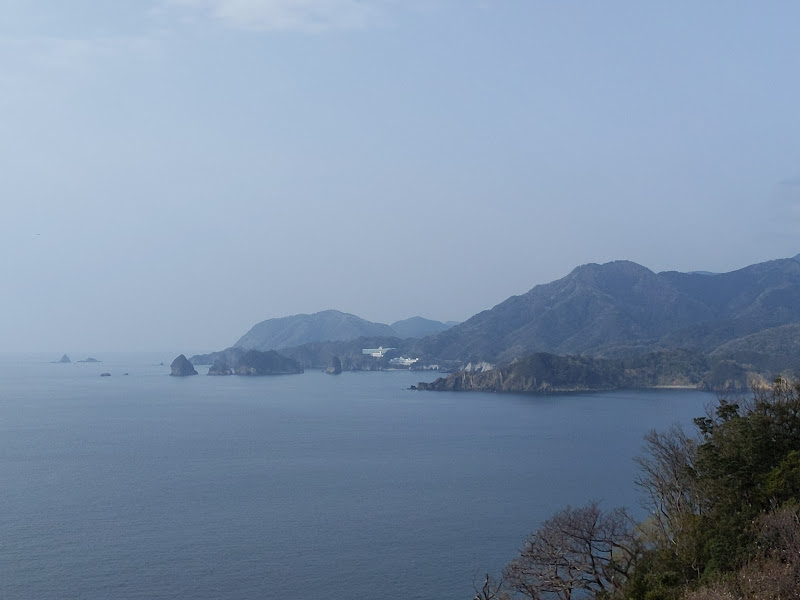 Before the 08:00 start I loaded up the course on my GPS unit, but hit an unexpected snag when it reported a file system error that required a factory reset of the unit, meaning I’d lose my stored breadcrumb trail for navigation that I normally use. So I had little alternative but using my phone and the paper cue sheets for navigation. However, I had not brought my usual plastic cover for the phone to protect it on the handle bars in case of rain, nor had I weather proofed the cue sheets. The map bag of my front bag is not totally waterproof.

I used RWGPS to load the course and map and it gave me verbal directions in English throughout the ride. I kept the phone connected to a 10,000 mAh USB battery in my front bag until the goal. I have two USB batteries and two phones. There’s always a plan B and sometimes a plan C! 🙂

When the rain started to come down on the way back near Toi, I covered the phone with a plastic shower cap from a hotel stay which I secured it with rubber bands. I always keep one shower cap in the front bag as an emergency cover for the leather saddle or whatever. When my wet fingers made the touch screen difficult to operate, I used spare dry socks that I also kept in the same bag to wipe the screen dry again.

During a brevet on February 10, 2019 organized by Audax Kinki, a participant was sadly hit from behind and killed by a car in a tunnel. Brevet participants are required to wear reflective vests throughout the ride, but sometimes they wear a backpack which could partly obscure the reflective vest. Thus we were asked to wear the vest on top of any backpack. I actually brought two reflective vests, one to wear and one for my light string backpack (for spare clothes) to “wear”, which made getting changed quicker. I had bought the second at a brevet reception when I had forgotten the original one at home.

Most of the starter group did not spread out much until we turned the NW corner of Izu and the bigger climbs started. I took some pictures of the others and the scenery, but it was too hazy to see anything of Mt Fuji or even much of the mainland coast of Shizuoka on the other side of the bay. Mt Fuji remained totally hidden for the entire day.

As it got warmer towards noon I started fading a bit. I would have been really uncomfortable in long pants and thermal jacket. I was now riding on my own but comfortable in the knowledge that I was 50 minutes ahead of minimum pace at that point, which should normally ensure that I would complete the ride under the time limit.

There were a fair number of cherry trees, but most of them weren’t in full bloom yet, many quite sparse at the top still, so I didn’t take too many pictures of them. There were only two timed controls on this course between the start and the goal, with 161 km in between. Near the southernmost point of the ride there was a photo check: We had to take a picture of a viewing platform on a mountain road together with our brevet card to prove we passed there. I climbed the mountain road together with a young couple. They had already suffered a puncture in NW Izu that had cost them time, while I frequently stopped for pictures.

From there I enjoyed a long descent to Kumomi Onsen. I had visited there in December and then climbed Mt Eboshi, which offers a breathtaking scenery of the coast. We passed Iwachi Onsen, where I had often visited by car when our children were still little. 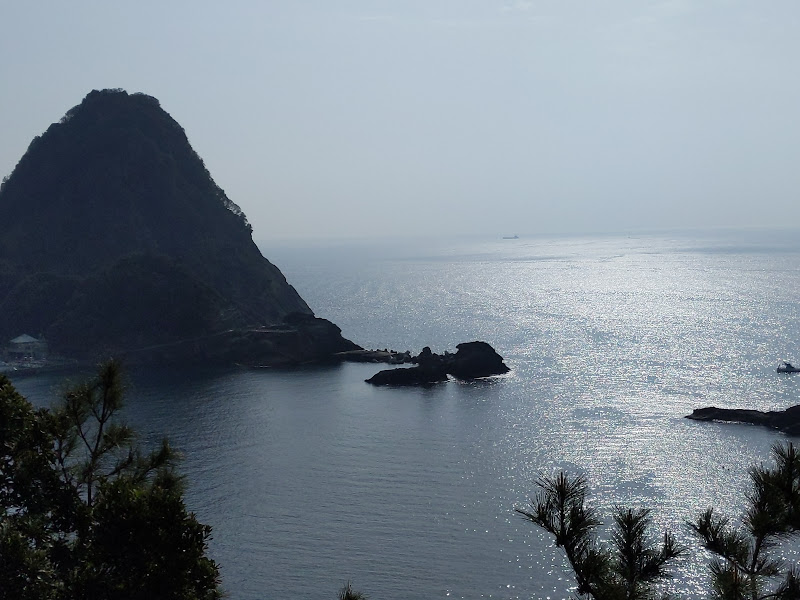 I was trying to make it to near Heda village by sunset, where a staff member was taking pictures of all of us as we passed, but my own pictures took priority. At the last conbini in Toi before the wilderness it started raining and I put on my rain gear. On the descents I had to be a lot more careful. The wet asphalt soaked up all the light.

The rain became quite intense and I couldn’t help thinking of the 17 non-starters who had listened to the weather forecast… but with my time buffer I expected I’d still make it in time, unless I had bad navigation problems in the last 20 km. The phone became difficult to use when its touch screen got wet. Once, the RWGPS app somehow ended up back on the route selection and I had to restart the Navigation, which seemed to have cost me my downloaded maps 🙁 Now I could only use the turn by turn instructions to follow the course, but no map view. Fortunately, those turn by turn instructions worked flawlessly, even if the sound volume wasn’t always high enough to be clearly audible. Worst case I had to check the screen. Twice I went off-course but it soon let me know and it recovered when I backtracked to the wrong turn.

After more than 3 hours of riding in the dark I finally got close to Mishima station. When I stopped at the traffic light across from the Toyoko Inn, a staff member waved at me and handed me a note with the finishing time after I crossed. It was 21:19, only 11 minutes under the cut-off time. At the goal reception I presented my brevet card, the receipts from PC1 and PC2 (both 7-11 stores) and showed a photograph of the viewing platform. I had successfully completed! The young couple also made it. They arrived a mere 2 minutes before closing time. Another cyclist who had punctured on the last part of the ride in the rain was over the time limit.

On the drive back to Tokyo I stopped twice at Tomei expressway service areas for some rest, as I was too sleepy. When I got home I unloaded the car, took a shower and went to bed at 02:00. Two more weekends before the 360+ km Fleche ride for which I’m preparing.