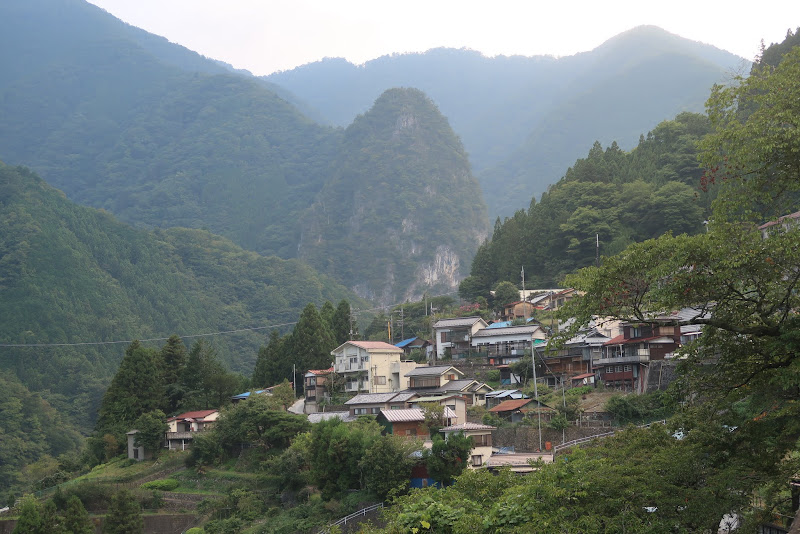 The biggest difference has been that I didn’t participate in any 400 or 600 km brevets this year due to my business travel schedule. Both in 2015 and 2016 I had signed up for one 400 km brevet (which I finished) and one 600 km (which I DNF’ed). Both years I also pre-rode the 400 km route on a personal long distance ride. So I missed some distance overall, but most months I managed to ride 2 or 3 centuries. It’s all about being consistent.

With my December rides I have extended my “A Century A Month” streak to 5 years and 4 months. To ensure that I can keep this up, I usually do a long ride on the first weekend of each calendar month. That way, if anything comes up later in the month, such as a typhoon hitting Japan or me having to travel abroad, I won’t have an issue.

One of the most important factors no doubt is to avoid injury. Many of my friends have been involved in road accidents. A broken collarbone or other severe injury could put you out of action for weeks or months. Any kind of road sport has risks, but I try to limit my exposure. I am not a very ambitious descender because with anything that happens at high speed, the negative effects will be magnified. I am not ambitious when cycling in a city either. Where I work hardest is on climbs, because I need to 🙂

I have been very pleased with my Elephant Bikes National Forest Explorer. Last year I converted it to 11 speed with a Sugino “compact plus” double crank and hydraulic brakes. It has been fun to ride and extremely reliable. The ride comfort from the 42 mm Compass tires is terrific and I have been without puncture for 20 months now. I still ride my Bike Friday Pocket Rocket as well and had its rear converted to a disc brake a couple of months ago.

The main attraction of long rides to me is the views I come across, at all times of day, in all kinds of weather and in all four seasons. I ride to see things, by myself or with friends.

Here are some pictures from one year of cycling: 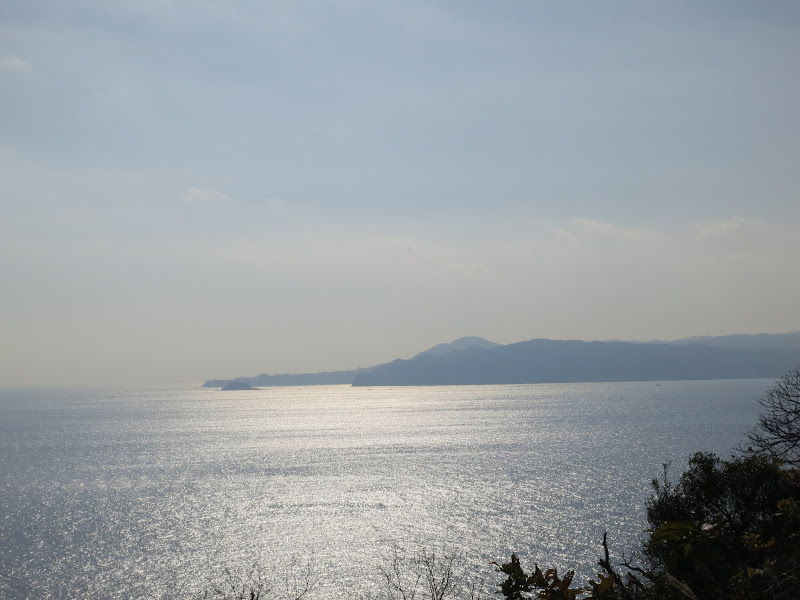 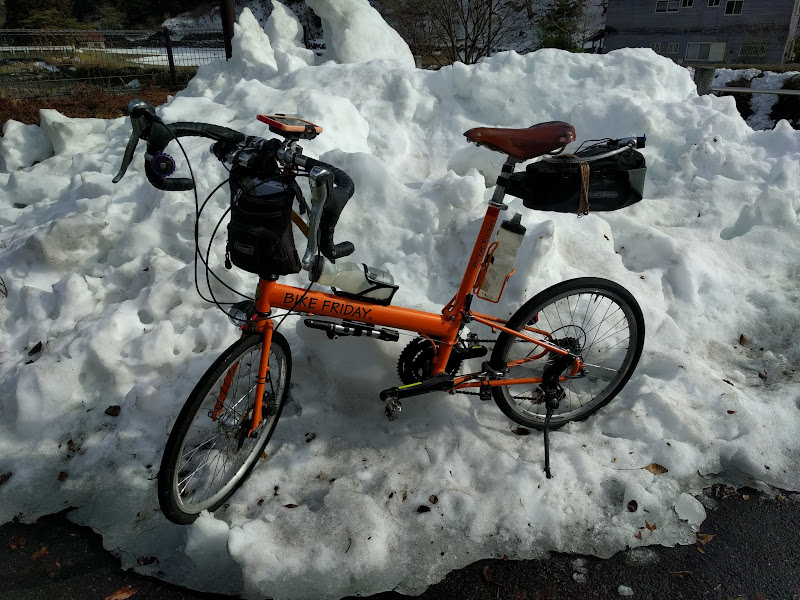 February: Boso Peninsula via Kurihama Ferry across Tokyo Bay (cycling to and from Miura peninsula) 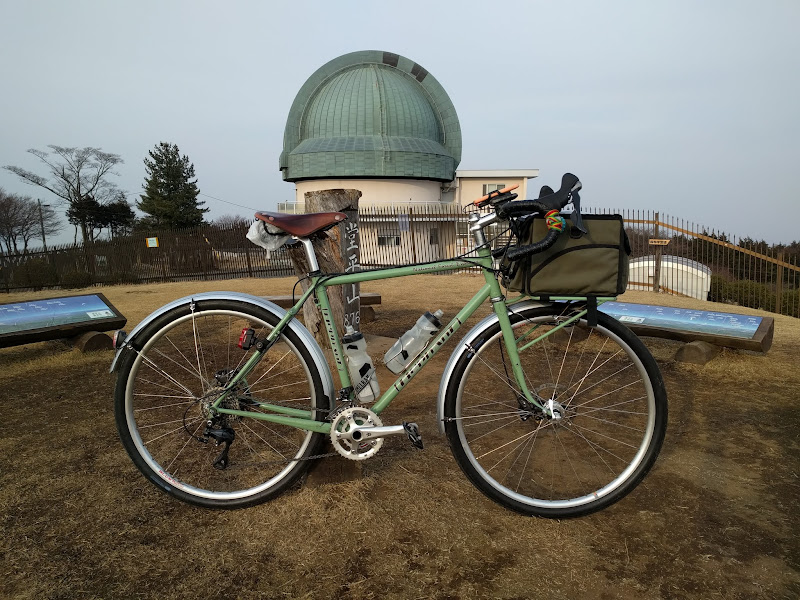 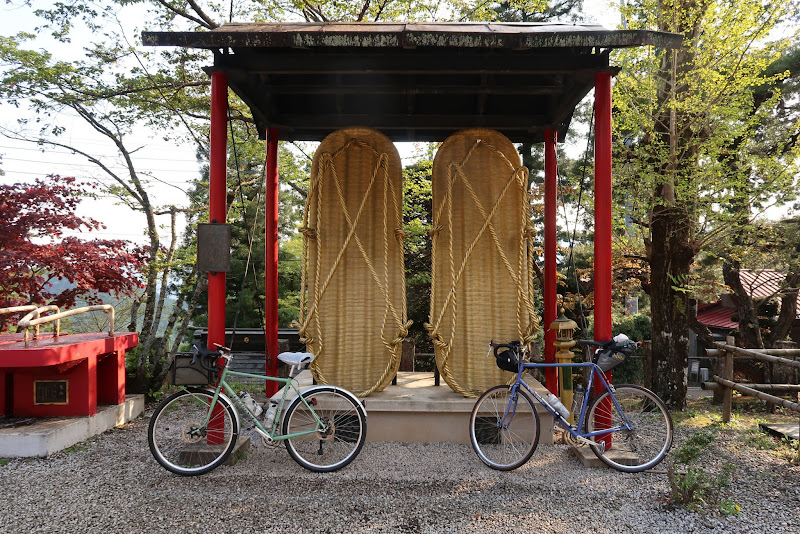 May: Ome Temple Loop, a very mountainous course in Saitama that I normally only do once a year. I did it twice this year 🙂

May: BRM520 around Mt Fuji — my fastest ever finishing time on this 300 km brevet 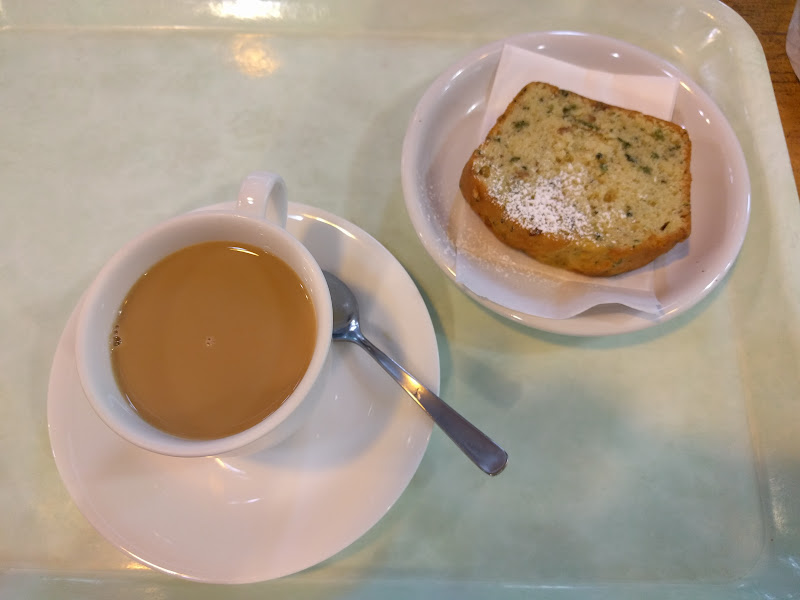 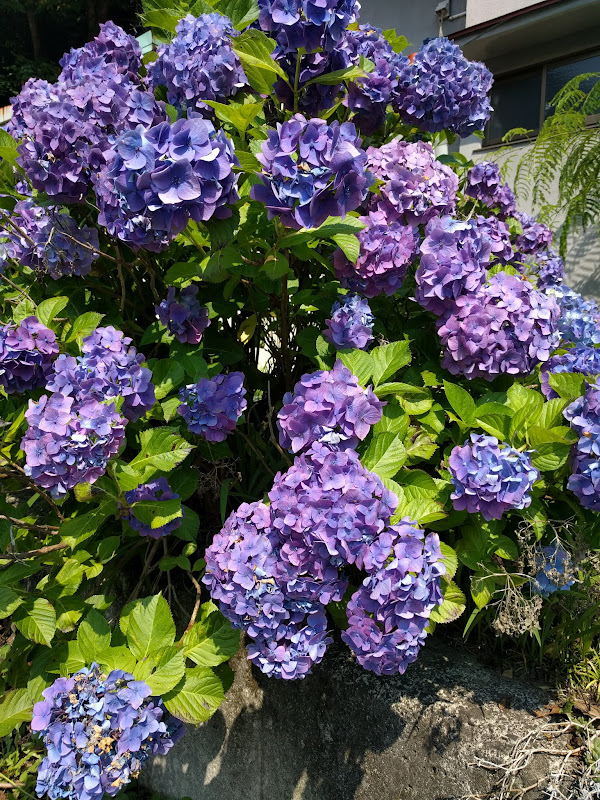 July: Some hydrangea blossoms at a mountain ride in Hinohara with friends. 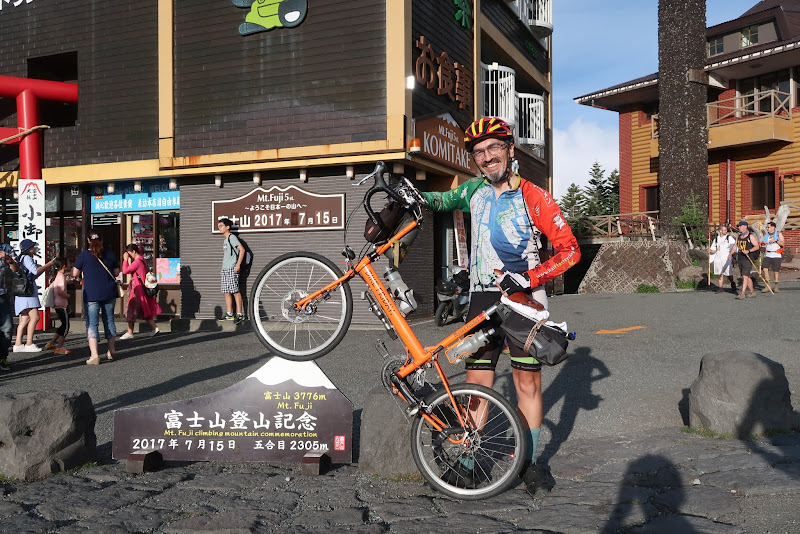 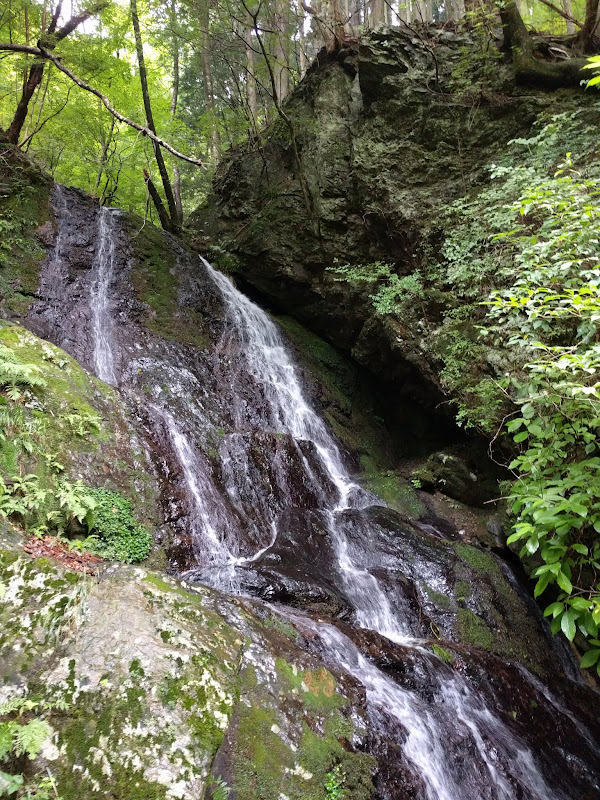 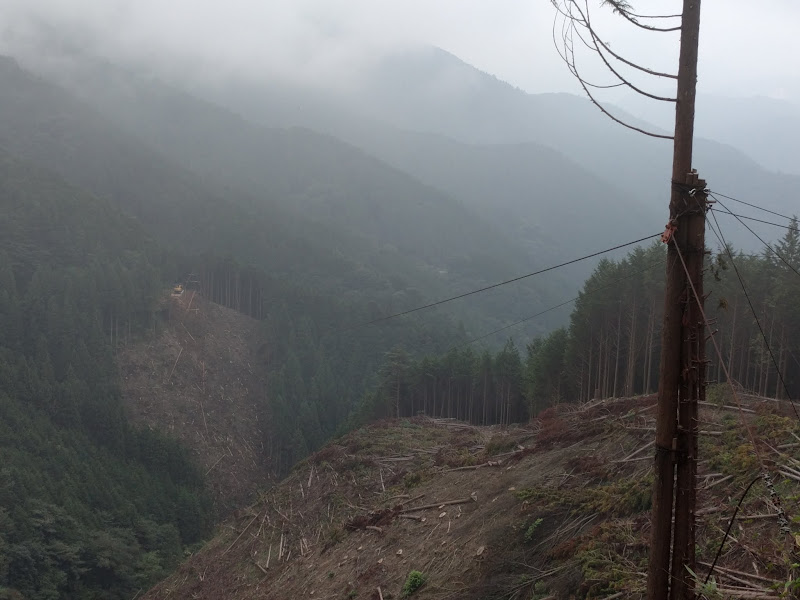 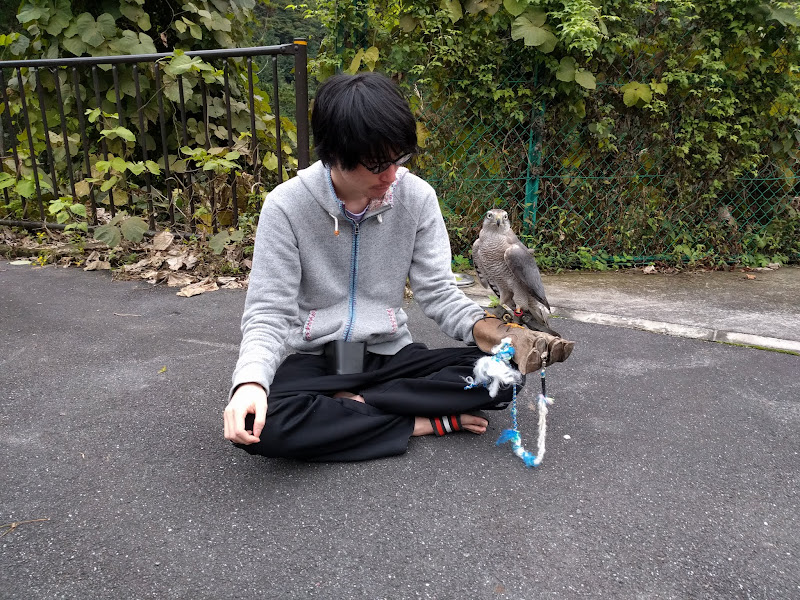 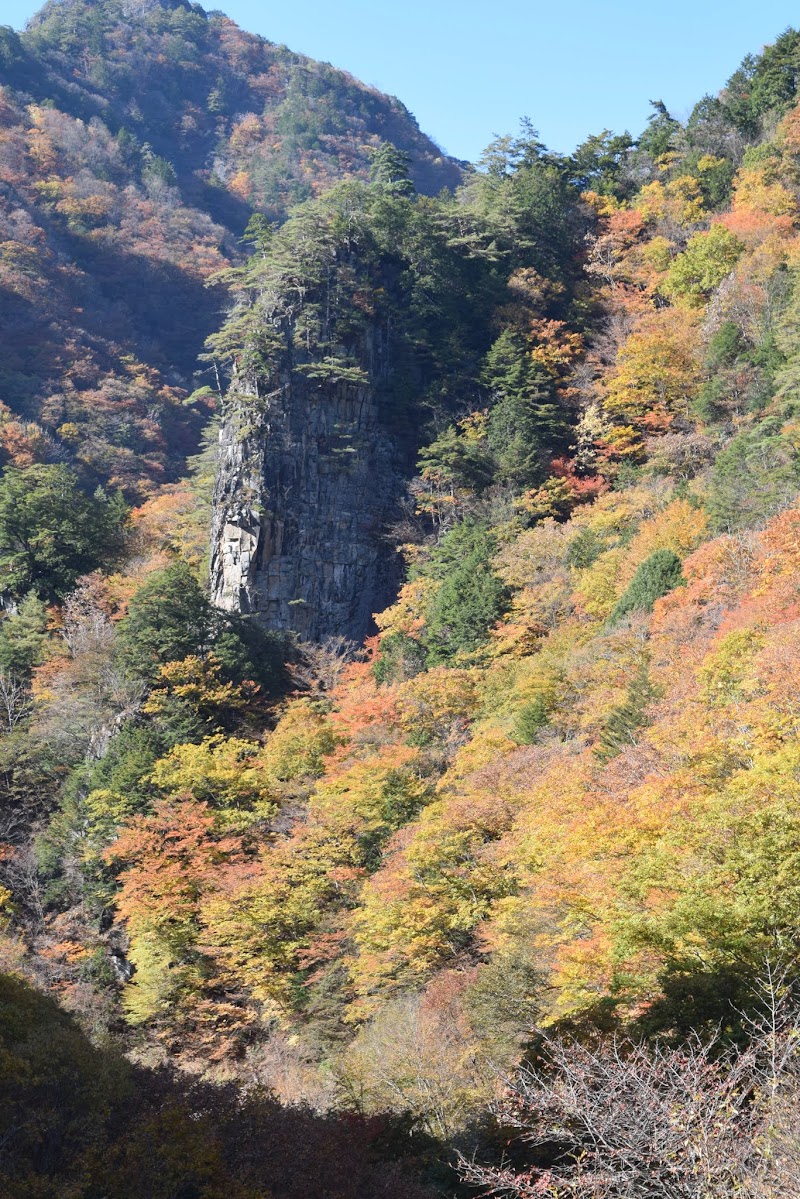 Most of the brevets I ride are with AJ NishiTokyo, a randonneuring club based in the Machida/Sagamihara area. One thing I like about their rides is that they provide a link to a RouteLabo page for each event (RouteLabo is an online map service run by Yahoo Japan). This page shows a map of the course as well as download links for KML, GPX and TCX files of the course. By copying these files to your GPS device (Garmin or other) or by uploading a KML file to Google “My Maps” for your smartphone, you can almost completely do away with the need for paper cue sheets. I navigate all my brevets and many of my personal rides by following a “breadcrumb trail” on the screen of my GPS unit.

Unfortunately other clubs often only provide a map without any download option, like this Randonneurs Tokyo 2018 BRM421 Tokyo 600 Lake Hamana (BRM421東京600浜名湖鰻) page:

This does not help you much on the road. Without a link to the full RouteLabo page with download links, there’s no obvious way to obtain a GPX or KML file. You are still expected to navigate via printed turn instruction on a paper cue sheet, which I find cumbersome and error-prone.

However, there is a way!

The web page uses some Javascript code to display the map off the RouteLabo website, including a magic value that identifies the particular course to be shown. To see this value, view the source code of the page. This step varies by browser and operating system. On Chrome under MS Windows, Ctrl+U will show the source code, on a Mac under Chrome, Option+Command+U will do it. On Safari, once you enable the option via Safari > Preferences > Advanced > Show Develop Menu, you can also use Option+Command+U (just like in Chrome).

In the displayed HTML code, search until you find a line for Javascript like this one:

The value consisting of 32 hexadecimal characters (128 bit) after “id=” is the magic value you’re looking for. A full RouteLabo page URI with the download options will look like this:

By replacing the value after “id=” in the URI with the ID from inside the HTML code using copy and paste, you will get a browser URI that will give you full access to the route, including route file download links to feed your GPS device of choice. You can then bookmark it for future reference. Bonne route! 🙂

As a spam and scam research I watch new domains being created for malicious purposes. The following domains are look-alike domains of blockchain.info and blockchain.com, two legitimate Bitcoin-related domains:

These so-called IDN domains substitute characters for easily confused look-alikes. There will be sighted in links inside spam emails as part of Phishing scams.

Phishing is just one of the pitfalls around Bitcoin and other crypto-currencies. Scammers have revamped the old so called “High Yield Interest Programs” (HYIP), which are really just a Ponzi scheme, to hitch a ride on the publicity around Bitcoin’s stratospheric rise in 2017. If you deposit Bitcoins into an online investment scheme, the scammers can just walk away with your deposit and cash it out into dollars, euros or rubles without being traced.

The latest exchange rate push beyond US$10,000 came on the heels of the cancellation of the SegWit2x fork, a proposed upgrade to the underlying technology that not the entire Bitcoin community was prepared to follow. The driving force behind the upgrade was the urgent need to handle more transactions, if Bitcoin was truly going to be used as a payment vehicle competing against credit cards, wire transfers and PayPal. If new Bitcoins are constantly being mined and the value of Bitcoin goes up but the average purchase the crypto-currency is to be used for doesn’t change much then the system needs to be able to handle more individual transactions.

By cancelling the upgrade, a split of the community has been avoided, but at what cost? It’s really a vote for Bitcoin as speculation object and against it as a viable payment method.

A friend of mine expressed it best when he mentioned that it reminded him of “Pump and Dump” stock scams, only that in the case of Bitcoin it is legal. With all this publicity, existing Bitcoin holders
will be able to offload their existing tokens at huge profits. Then, when people realize that Bitcoin is no longer able to work as an efficient payment system (except for scammers, drug dealers and money launderers who value anonymity), the bottom will fall out and all the recent investors will lose billions. It’s Tulip mania all over.