With the arrival of my Elephant Bikes National Forest Explorer frame and fork still a few months away I have started collecting parts for building up the complete bike once the frame arrives. The first part was a new Brooks saddle, which I received as a birthday gift from my son.

Next came the Spa Cycles TD-2 Touring Triple cranks, which at £75 (about 15,000 yen including shipping to Japan) were excellent value: 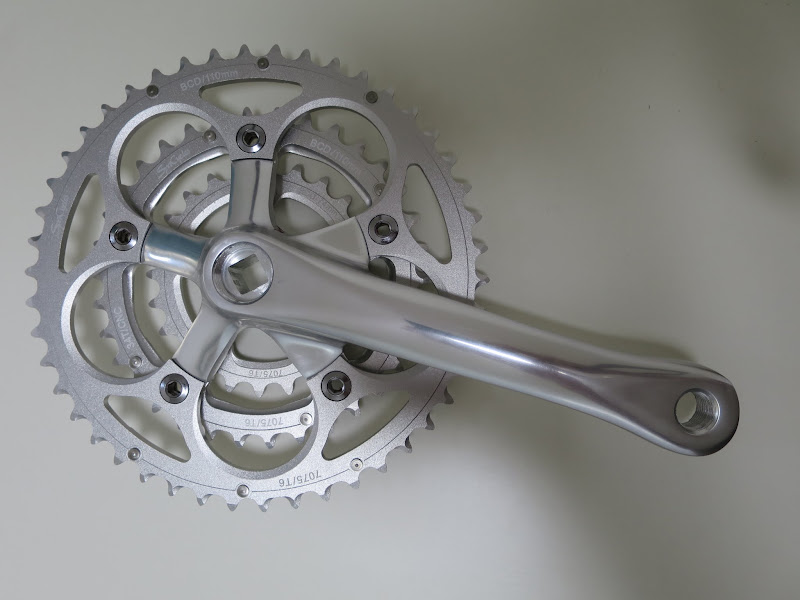 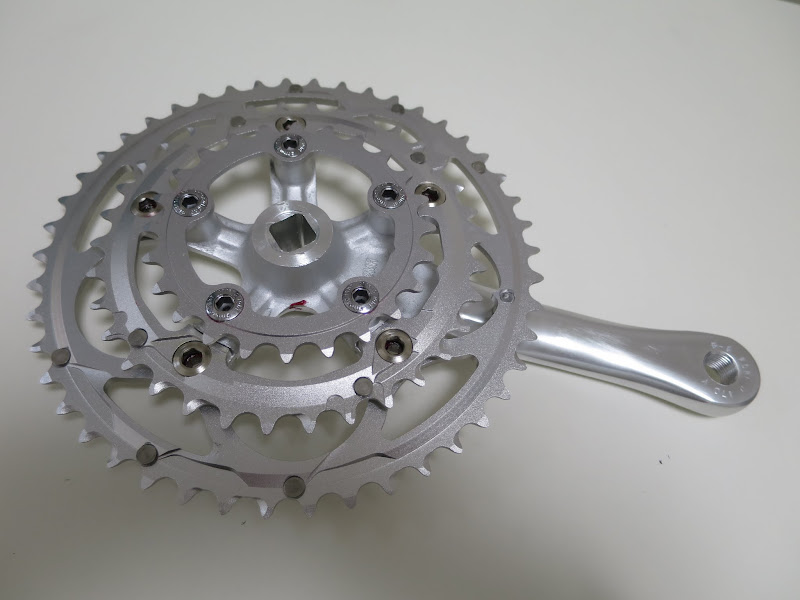 The ramps and pins should ensure it works with Shimano STI shifters. The cranks are made by Sugino in Japan from 6061 aluminium. It looks the same as the Sugino Alpina 2 triple, but without the Sugino logo. The Zicral (7075-T6) chain rings are branded for Spa Cycles but perhaps made by Stronglight. I chose the 46/34/24 chain ring combination as it will give me my ideal gear ratios when combined with a 10 speed Ultegra 12-30 cassette (from 21.0 to 100.7 gear inches). It doesn’t exceed to 22T capacity of Shimano triple front derailleurs (Shimano 105 FD-5703, Shimano Ultegra FD-6703). 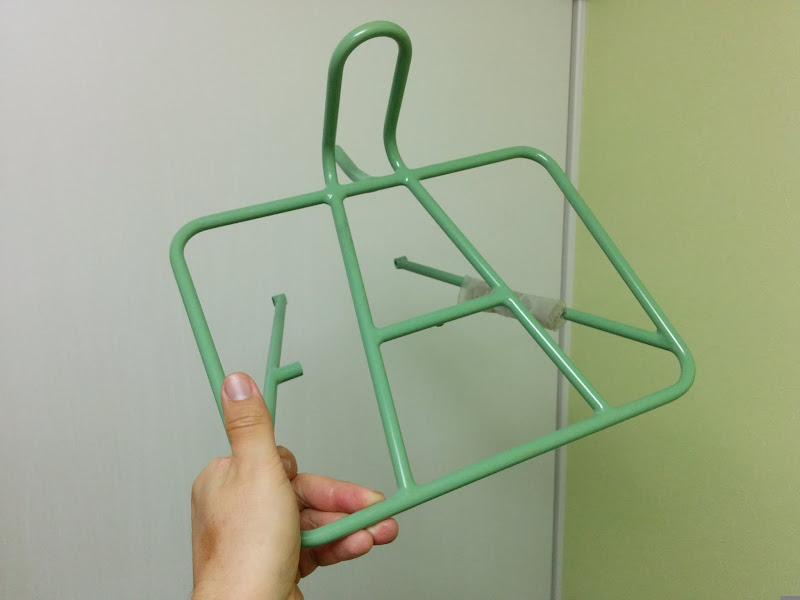 This is the Haulin’ Colin porteur rack powder-coated in Elephant NFE green (RAL 6021). I was surprised how light it was when I received it. Here is how Fred Blasdel uses his: I’ve ordered my 650B wheels from GS Astuto. They will be built using Velocity Blunt SL rims, a Shutter Precision PL-8 dynamo hub at the front and a White Industry CLD rear hub.

My first choice of tyres will be the Compass 650B x 42 Babyshoe Pass Extralight tyres.

The front derailleur will be an IRD Alpina-D Triple, the rear derailleur an Ultegra RD-6700-GS (medium cage).

One comment on the styling of the bike. The script font used for the model name on the top tube is more than a nod to the font used by the US Forest Service on their park signs and in their publications. However, the NFE frame colour is little lighter than the colour US Forest Service vehicles are painted in:

I’m a bit puzzled about the timing of Turkey’s recent attacks on Kurdish bases in northern Iraq, right after finally permitting the US to fly attacks against IS from Turkish bases. That sounds like playing both sides of the war to me… Weaken IS and its major enemy at the same time.

Does Erdoğan think the US will have to shut up about Turkish attacks on Kurdish forces if they don’t want to lose the long demanded use of Turkish bases against IS? Use of Turkish bases for the war in Syria will allow the US to step up attacks against IS, which might strengthen the position of Kurdish forces. During the siege of Kobanî, Turkey seemed determined to block Kurdish reinforcements against IS, as if it saw genocidal IS as the lesser of two evils.

Or is it simply payback time for the parliamentary triumph of the (Kurdish) People’s Democratic party (HDP), which deprived Erdoğan’s AKP of a majority in the general elections in June? Ending the peace process with Kurds may be an attempt to drive a wedge between the HDP and non-Kurdish voters, to split the opposition.

Last week it was reported that the Japanese Government Pension Investment Fund (GPIF) had made a record annual return of over 12 percent last year. Considering the rapidly aging population in Japan and the related problem of how to finance pensions for large numbers of retirees with a shrinking active workforce, this may have seemed very welcome news. However, if you look a bit closer, it isn’t all what it seems.

The GPIF owes the record return mainly to increasing share prices of Japanese companies, of which it is holding stocks. The Nikkei 225 recently reached its highest level in about 15 years and it wasn’t all because Japanese exporters profited from the weakening yen. Another big factor was the decision of the Abe government to have the GPIF shift its asset allocation from government bonds to stocks. It reduced the bond target from 60% to 35% while increasing the stock target from 9% to 25%. Most of the above-target bonds have since been sold to the Bank of Japan (BoJ), which under “Abenomics” will buy up any volume of government bonds.

With the money from the bond sales the GPIF could go on a buying spree, while individual investors have actually been selling more shares than they bought. The GPIF has been sucking up shares like a vacuum cleaner with money basically printed by the Bank of Japan and this extra demand has inflated market values for shares, whether held by the GPIF or by banks, insurance companies or private investors. Beating deflation was a major declared goal of Abenomics, but so far the stock market is the only part of the economy where the government has succeeded in that goal (albeit only by some impressive stage magic by the Bank of Japan and the GPIF).

Will this recent on-paper gain shore up public finances for pension payments and health care for the elderly? Not really. The stock market can be a tricky beast. Just ask the Chinese, who had experienced an even more impressive stock market bull run until their bubble burst!

If the GPIF holds 25% of its assets in shares and it needs to pay pensions, it can only do so by selling shares at whatever the market rate happens to be at the time, which will directly influence those market rates. And if it needs a lot of cash because there aren’t many workers relative to pensioners it will need to sell a lot of shares. Share prices went up because the GPIF was a huge buyer; if it were to become a huge seller, the opposite would happen. This is even true if the GPIF were to reduce its share allocation before the pension problem will reach its peak.

If the real economy tanks, it will hit tax revenues and the stock market at the same time: With the GPIF heavily invested there, the government finances and the pensioners will be doubly exposed.

For the GPIF to do well out of stock sales it will need a huge number of individual buyers, as it keeps liquidating its portfolio. But who is going to invest in stocks when they know the market will keep on getting flooded with sell orders for years to come?

Instead of addressing the real problems, the government of Shinzo Abe has been using smoke and mirrors to con the public. While pensions are no more secure than before, a lot of stock market investors have made a mint out of the BoJ-financed buying binge, enriching wealthy Abe supporters.

There are no easy answers to the pension problem. As the age pyramid changes and inverts itself, lots of things will have to change. For one, the retirement age needs to increase to re-balance the number of workers vs. pensioners. Japan will need to open its doors more for immigration. We’ll all have to work more years and the sooner the changes are made, the less painful it will be later. More emphasis will have to be put on covering the minimum needs of retirees vs. tying payments to previous income levels and contributions. Wealthier pensioners will have to make bigger sacrifices. The necessary steps will be painful and controversial, but they are unavoidable. Smoke and mirror “Abenomics” are no way around that.