If you click on the link to sign up, it takes you to a site called “onlineincomesolution.com” where you’re asked for your name, email address and phone number. The small print mentions that you’re placing an order for “Acai Lipo” for £99.97 and another £99.97 for “Quick Detox” (the price was probably shown in UK Sterling because my browser is set for English (UK)).

They are still using deceptive advertising to trick housewives and mothers into sending them money hoping to be able to support their families. They are targeting people for their scam who are out of work and short of money. How sick is that?

In recent months I have come across many ads for a website called earth4energy.com. If you haven’t seen the ads, it makes implausible claims of anyone being able to become energy independent for a only small investment. Make no mistake, it’s a scam, designed to sell worthless “e-books”. See this site for a thorough debunking of their claims.

The fact is, the electricity usage of average households can not be met easily or on the cheap from renewable sources using some DIY design. Any photovoltaic panels or wind turbines that are powerful enough to make a significant contribution will cost you a lot of money, typically at least several years worth of your normal electricity bill. These people would have you believe that for a few hundred dollars you could become independent of the utility companies. They do so because their business is selling e-books and videos to people. The exaggerated claims are how they get people to send them money. They are using an elaborate affiliate scheme and paid online ads to fish wide and far for people who might fall for their promises.

What I find particularly interesting about earth4energy.com is how similar it looks to the earlier “Run your car on water” scam I reported about a little over 4 years ago that made similarly outrageous claims. Then they promised cutting your fuel bill by wiring a “hydrogen generator” to your car alternator. Of course it didn’t work.

Both scams made money by selling worthless e-books. Both used affiliate schemes. On either set of sites when you try to navigate away from it, a dialog box will pop up to ask you if you really want to leave, trying to keep you there. If both schemes were not run by the same person, I’d guess they either used the same web designer or one guy closely copied the other. Typical for the hype used to sell on both sites is a “limited time offer” on earth4energy.com. When I checked it, it said the special offer expired on November 22 at midnight, which is today:

To secure your purchase and get the bonus products for free please order now. (This offer expires Thursday November 22 at midnight)

When I checked the source code of the earth4energy.com website, I found this piece of Javascript code that always outputs the current date:

It will tell you the offer expires on today’s weekday and today’s exact date at midnight. It will do so today, tomorrow or a year from now. The offer is not meant to ever expire, the fake deadline is only claimed to rush you into buying. That is just one example of deception on their site.

The identity of the registrant of domain “earth4energy.com” is hidden behind a WHOIS proxy, so we don’t know who it is. What’s interesting though is that the site was registered in June of 2008, around when I wrote about the earlier scam. Back then there was a site called water4gas.com (notice the similar naming scheme!) run by a guy calling himself “Ozzie Freedom”, whose original name was Eyal Siman-Tov. He is from Israel and appeared to be a member of the Scientology cult. In 2008 he got sued by the state of Texas for deceptive business practises. You can read about the court case here.

I find it interesting how many web pages out there promote both water4gas by Ozzie Freedom and earth4energy.com. Here are a few of them. Is that by coincidence or are they connected? 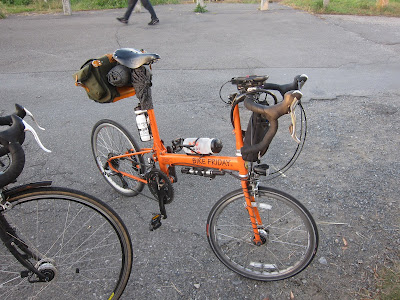 I try to cycle at least 100 km per week, with at least one all day ride (12 hours and more) a month. My latest such trip took me to Nichitsu ghost town, a former mining town set up by Nitchitsu Co Ltd in 1937 and abandoned in the late 1970s. Since May several members of Tokyo Cycling Club (TCC) had been passing through that place. The pictures of it that I found on the web looked very interesting, though I did not fancy looking for the infamous brain in a jar.

A week ago another TCC group went on an autumn leaves viewing tour in the area, but I couldn’t make it. So I decided to go the following weekend, together with my friend Jose, with whom I had done several long rides last winter and spring (including the BRM519 300 km brevet in May).

Jose and I both wanted an early start and we agreed to meet at 05:30 at the Tamagawa bridge near Yanoguchi station. I got up at 04:00, planning to leave at 05:00, but ran 10 minutes late because I decided to get changed again to be better prepared for the cold and later was glad I did! I changed from my cycling shorts with extra set of tights on top into corduroy pants and long johns. Later on, when descending from a tunnel that is the highest point of the route (elevation: approximately 1250 m), I also wore up to three shirt layers (two short sleeve and one long sleeve sports shirt) plus a wind breaker, a scarf and ski gloves. 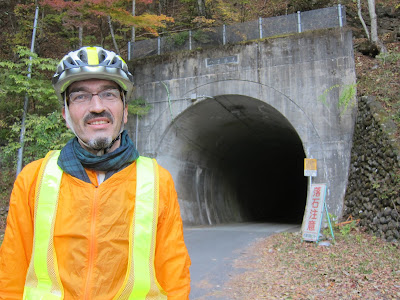 While climbing I stripped down to a short sleeve t-shirt when it was 9° C. At the higher altitudes it was around 3° C and I wore another layer.

The day before the ride I got myself a Carradice Pendle saddle bag for the Brooks saddle on my Bike Friday to carry clothes, bread and the obligatory bananas (hey, you can’t go on a lengthy bike ride without bananas!). The bag was the perfect size for this kind of trip. 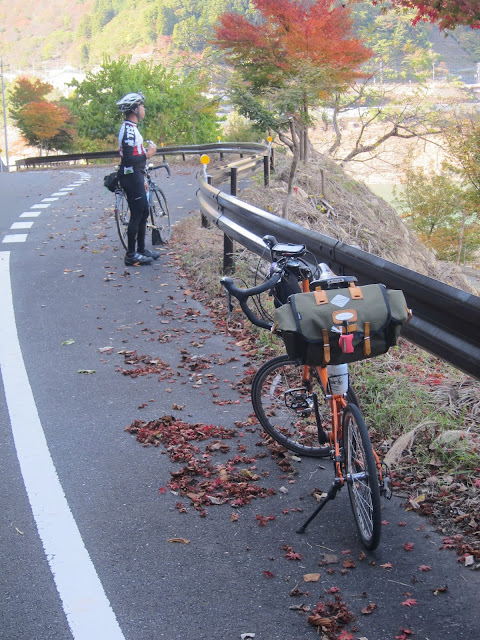 After meeting up at the Tamagawa river we cycled along the east bank up to Oume. After a 20 minute stop at the station convenience store we headed off into the mountains, climbing Yamabushi pass and descending into Chichibu via a route recommended by my friend Pete. 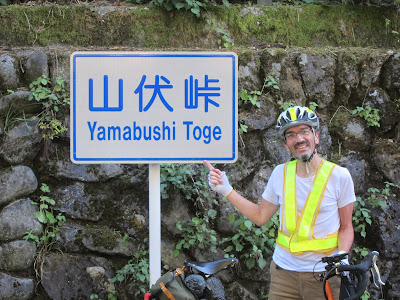 5 1/2 hours after leaving home we arrived at Chichibu where we had a nice 50 minute bakery lunch and coffee at a mall, then set off for the big autumn leaf viewing loop. We encountered plenty of nature, including one deer with big antlers, but fortunately no bears: 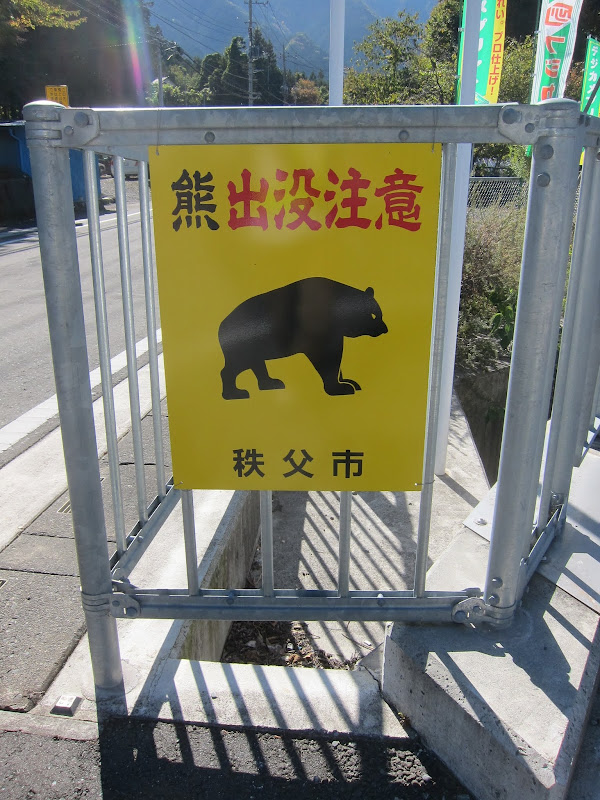 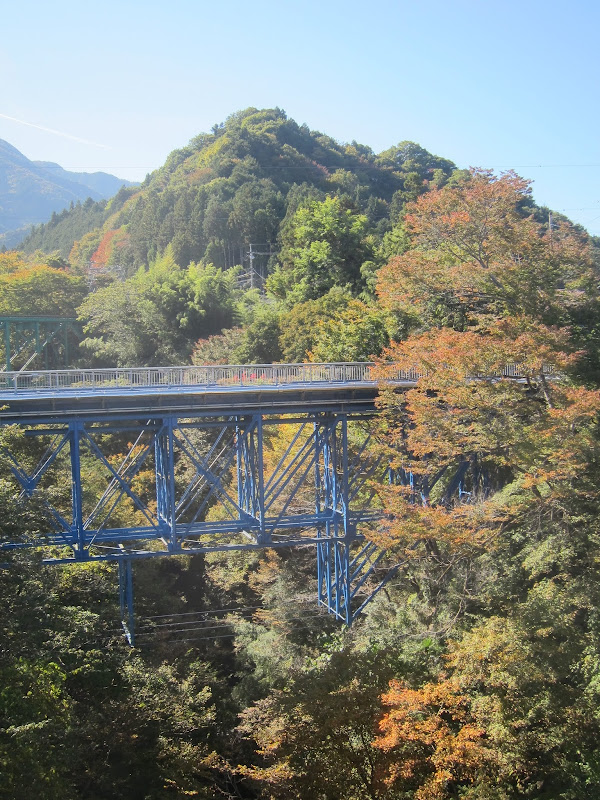 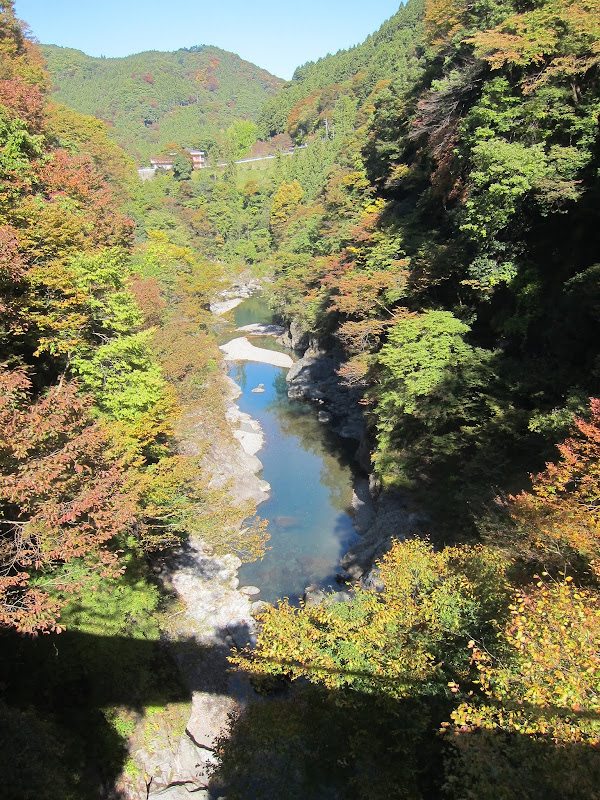 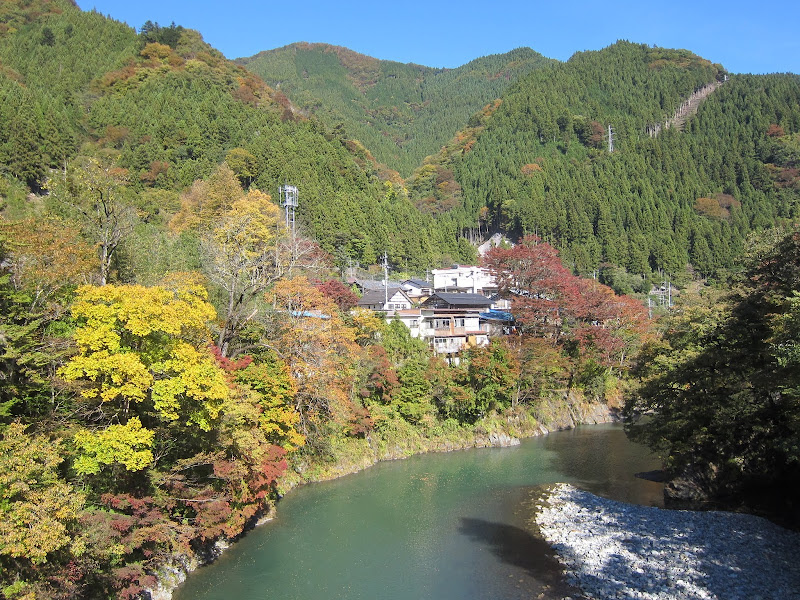 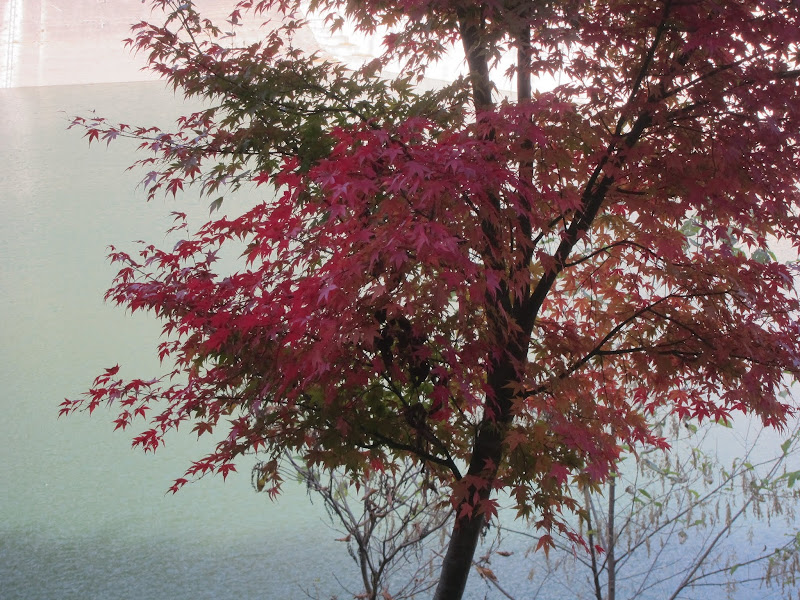 The back roads were great, some of them almost totally deserted of cars. At other spots there were many parked cars and people walking around with tripods and fine SLRs to capture the splendid seasonal views. 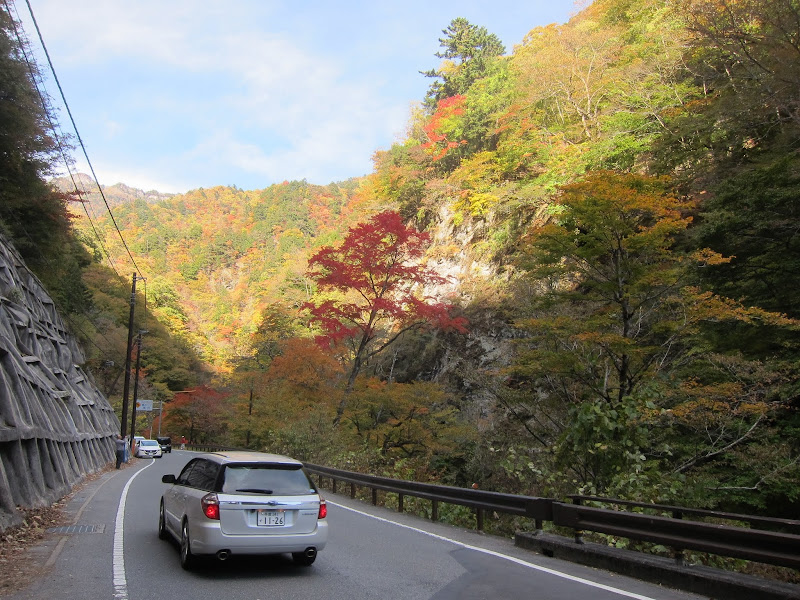 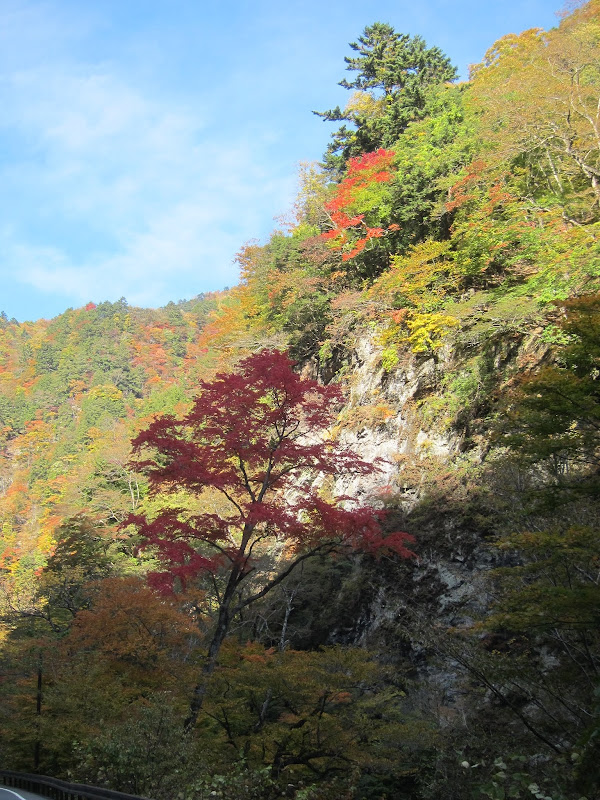 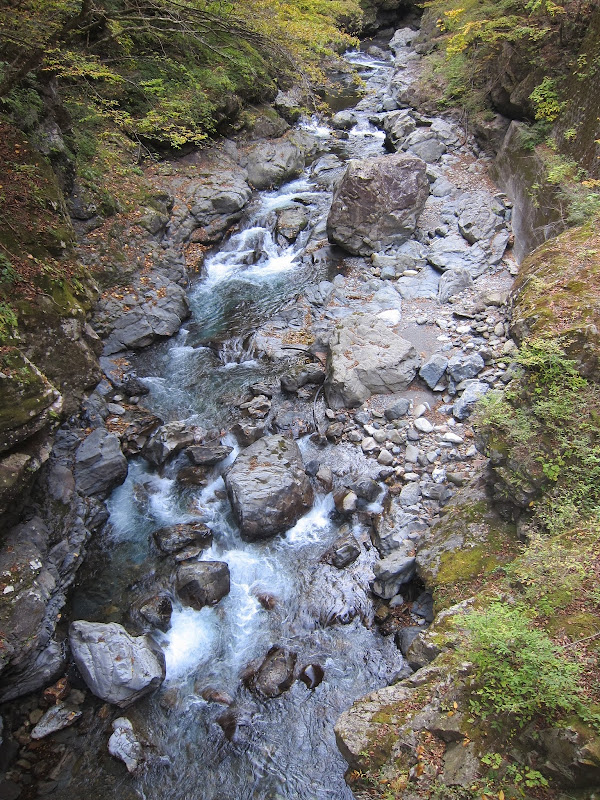 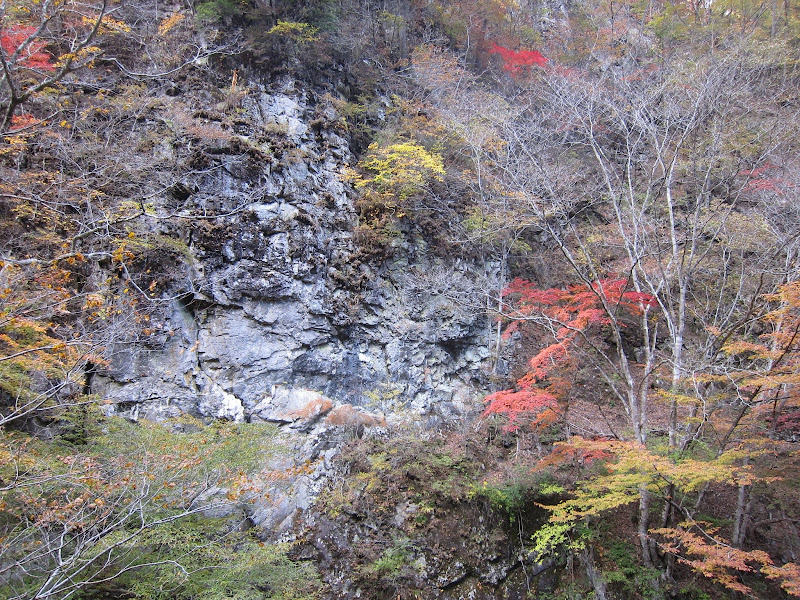 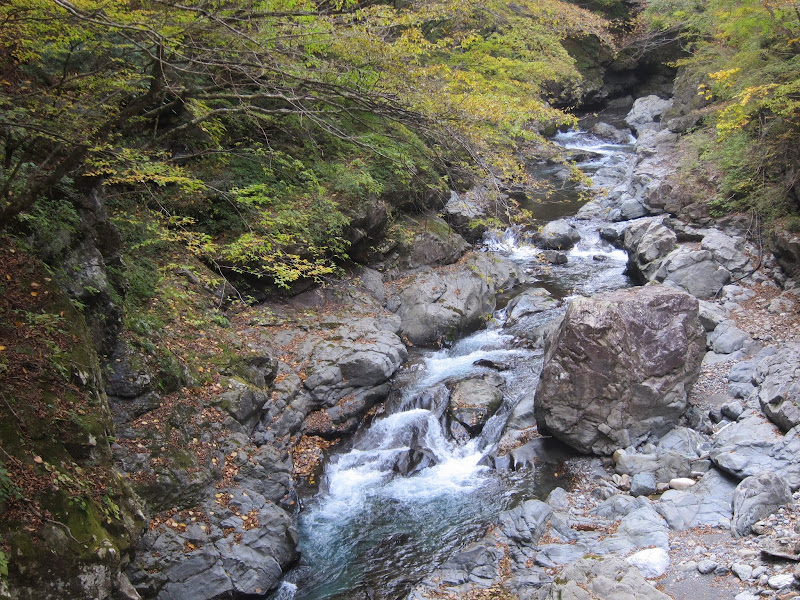 It took us four hours from Chichibu via route 140 and route 210 to Nichitsu and the tunnel above. These are some workers’ dormitories: 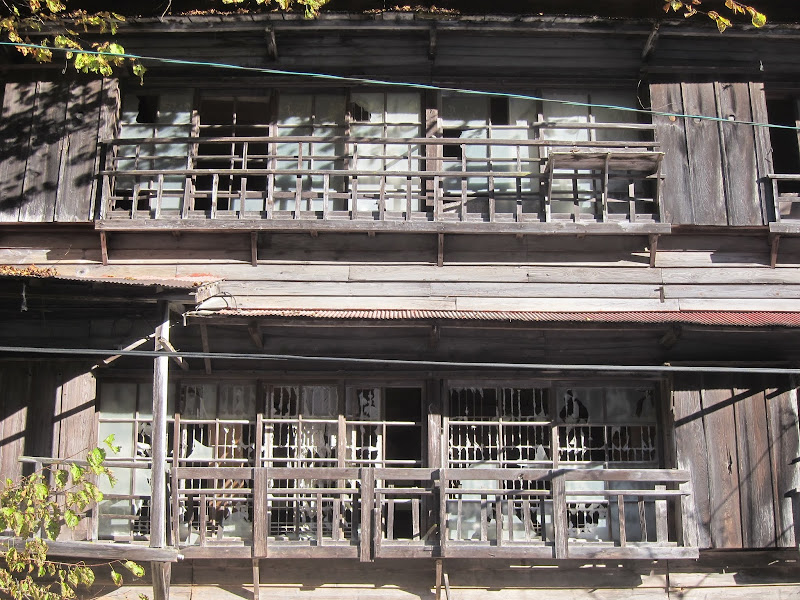 This used to be the public bath house: 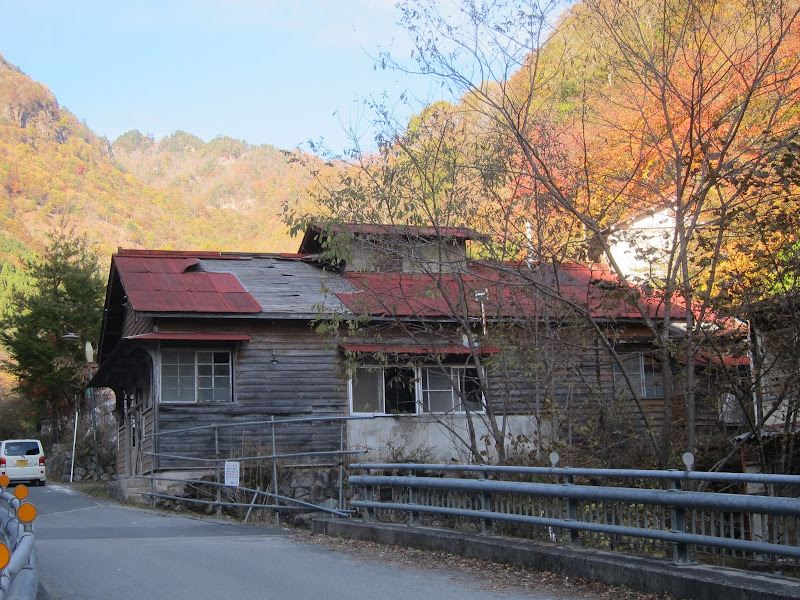 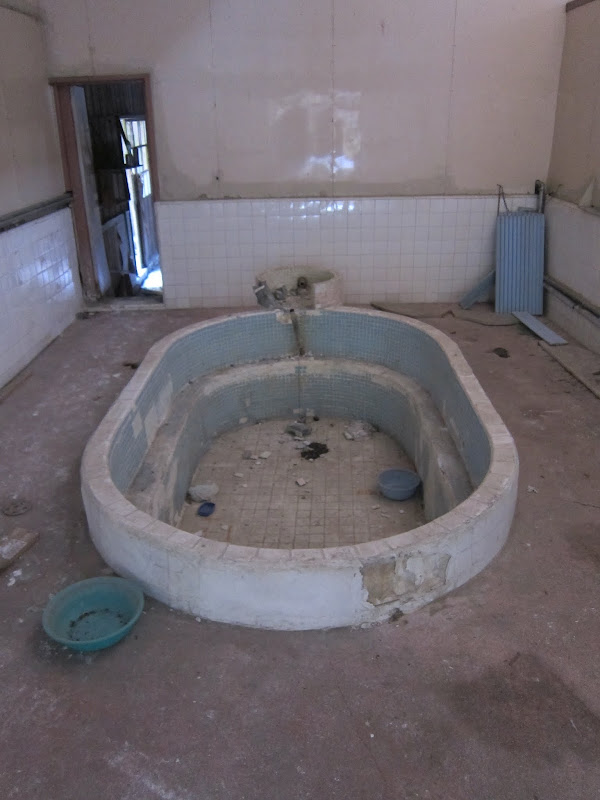 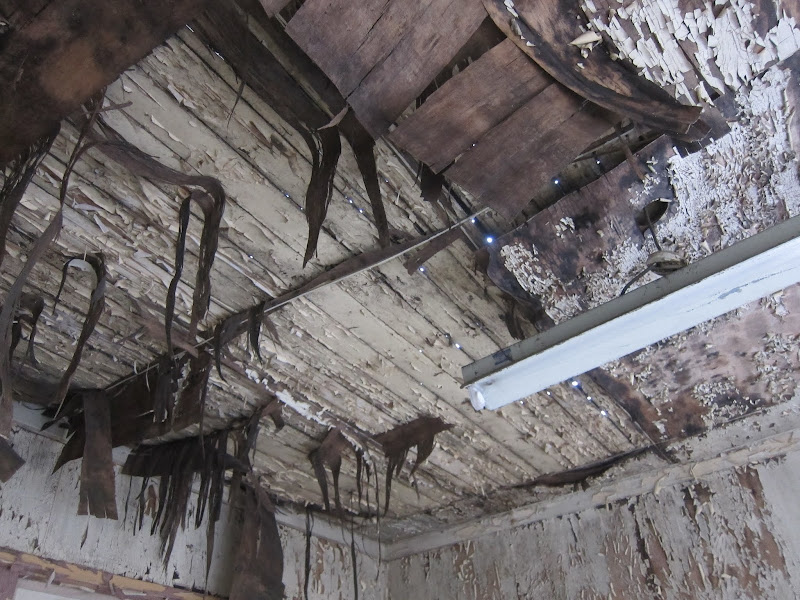 This is the tunnel at the top of the valley: 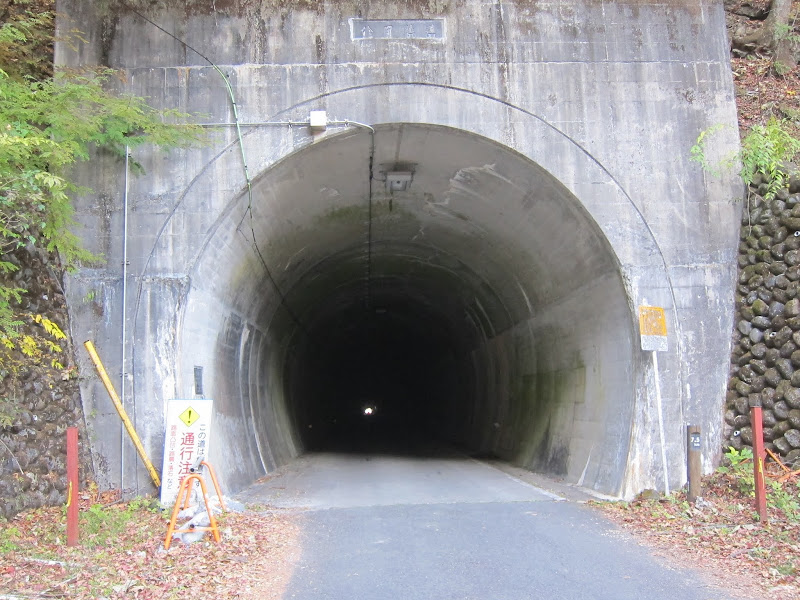 The trees became more colourful the higher we climbed. At the top most of them had already shed their leaves. The climbs were maybe as steep as 10 % and did I already mention that it was cold? 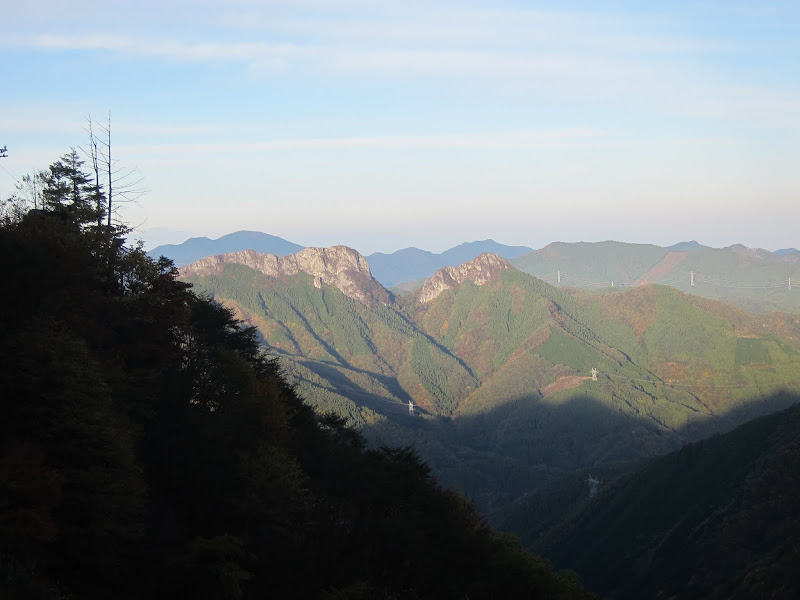 Though we never stopped for very long, we stopped many times for pictures, as these were a main goal of the ride. Thank you for your patience, Jose! 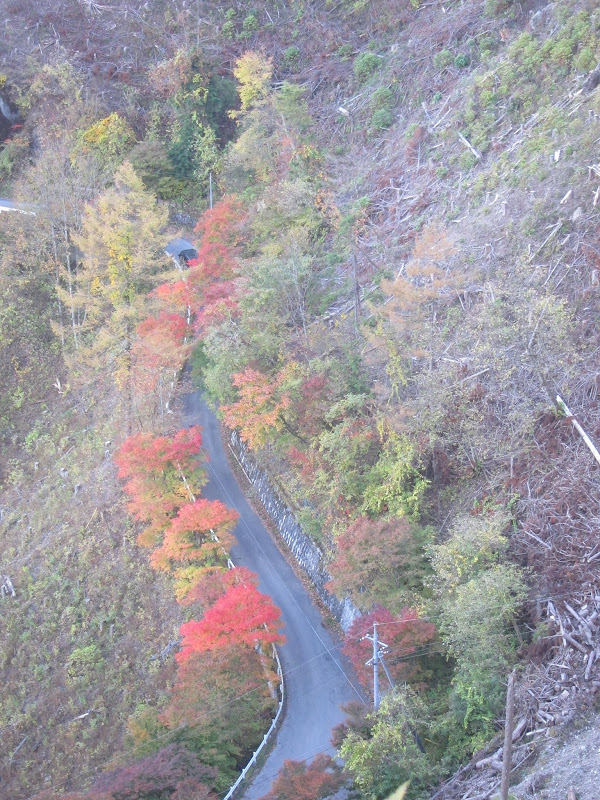 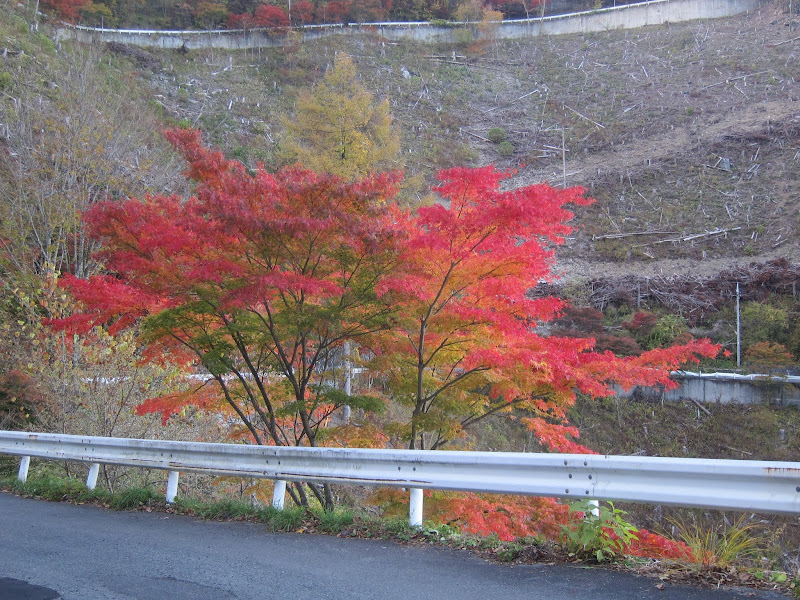 After already riding for an hour in the dark we got back to Chichibu around 18:00. We had just enough time to pack the bikes and get some food before hopping on an express train back over the mountains. We had covered 177 km with over 2400 m of climbing in beautiful countryside. What a great day! 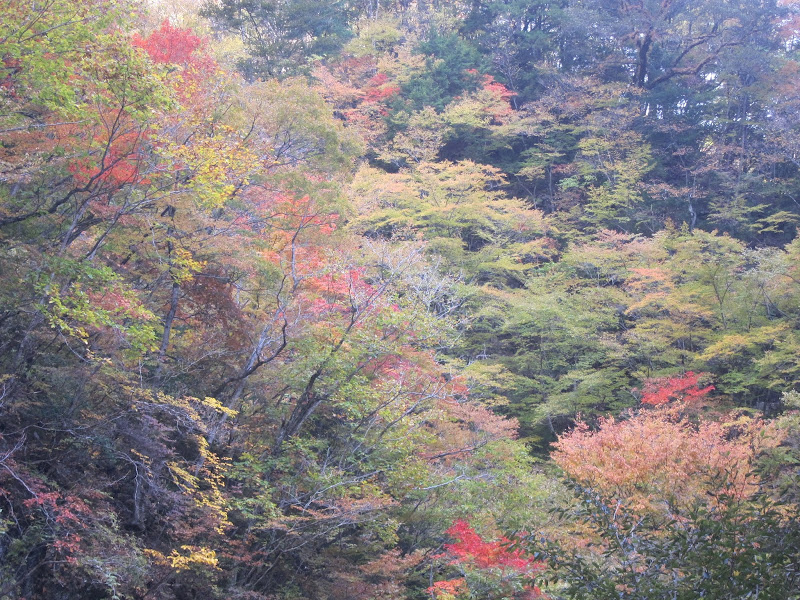