We received the following to our domain registrant contact address (listed in WHOIS) from Domain Services <notice@domainnotices666.com>:

Attn: MY-NAME-HERE
As a courtesy to domain name holders, we are sending you this notification for your business Domain name search engine registration. This letter is to inform you that it’s time to send in your registration and save.

Failure to complete your Domain name search engine registration by the expiration date may result in cancellation of this offer making it difficult for your customers to locate you on the web.

This Notice for: WWW.MY-DOMAIN-HERE will expire on November 23,2015 Act today!

By accepting this offer, you agree not to hold DS liable for any part. Note that THIS IS NOT A BILL. This is a solicitation. You are under no obligation to pay the amounts stated unless you accept this offer. The information in this letter contains confidential and/or legally privileged information from the notification processing department of the DS 3501 Jack Northrop Ave. Suite #F9238 Hawthorne, CA 90250 USA, This information is intended only for the use of the individual(s) named above. There is no pre-existing relationship between DS and the domain mentioned above. This notice is not in any part associated with a continuation of services for domain registration. Search engine submission is an optional service that you can use as a part of your website optimization and alone may not increase the traffic to your site. If you do not wish to receive further updates from DS reply with Remove to unsubscribe. If you are not the intended recipient, you are hereby notified that disclosur
e, copying, distribution or the taking of any action in reliance on the contents for this letter is strictly prohibited.

If you have received a message like that, ignore it. It’s actually an illegal solicitation, as it’s against the terms of use of WHOIS lookups to use them for spamming, which is what this is.

All it takes for search engines to find you after you register a domain and create a website for it is one public link on a website. There is no need to pay any registration service for it. Besides, if the spammers already found you, you obviously don’t need “search engine registration” 🙂 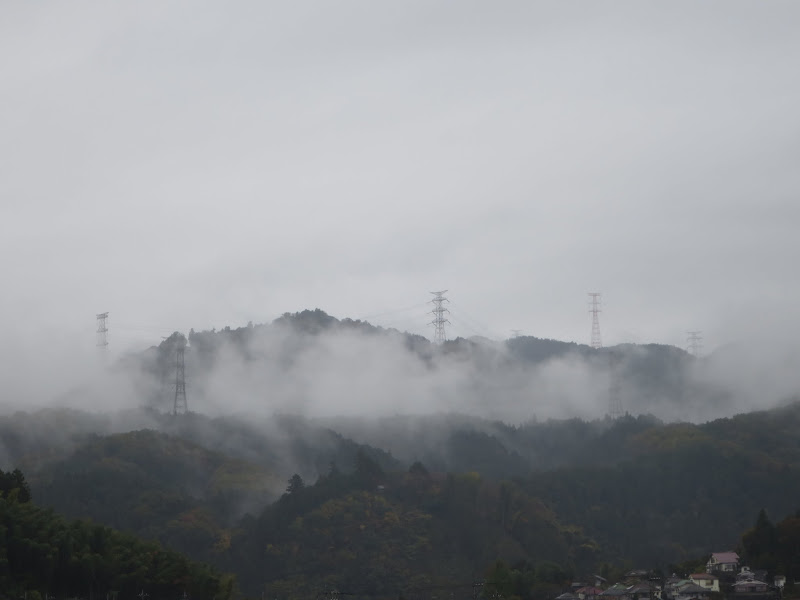 “It’s going to rain on Saturday,” somebody on the adjacent table mentioned. “Oh really? I’ve been looking forward to rain for weeks, to be able to test my disc brakes!” I blurted out and the room suddenly went silent. Everybody was giving me a look that made it perfectly clear that this wasn’t the sort of comment that will win you popularity contests at a monthly bike meeting.

But it was true. The lack of reliable braking in the rain was the main reason why I had swapped the cantilever brake on the front fork of my Bike Friday for a disc brake (after upgrading to a new fork). Since then I hadn’t had the chance to test the new brake under the atrocious conditions I had wanted it for. I finally wanted to know how much difference the new brake would make.

So when the rainy forecast for Saturday remained unchanged by Friday afternoon, I announced to my wife that I was going to do a rainy ride the next day. The forecast was for light rain in the morning and heavier rain in the afternoon and evening, with 12 mm falling during daytime. Temperatures were supposed to be in the 12-16 C range. 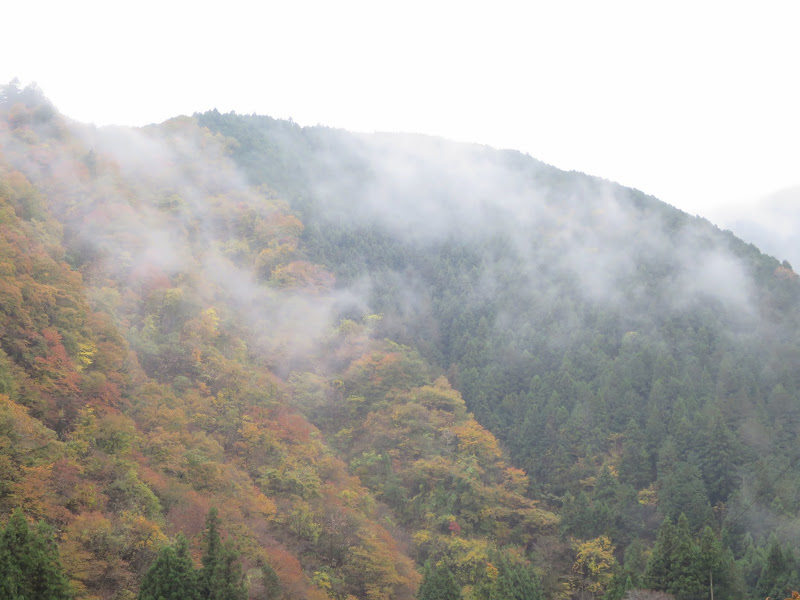 “I’ll do the ride because I can,” I told my wife. I don’t ride in the rain because it was so much fun (usually it isn’t, even though atmospheric views and the resulting pictures often make up for some of the inconveniences), but because I don’t want to let the weather scare me. A lot of aspects of randonneuring can be intimidating, such as the distances or the amount of climbing or riding at night or sleep deprivation on 20+ hour rides. Much of the challenge of randonneuring is mental, i.e. having the confidence that you can do the ride despite all the challenges. The only way to build and maintain that confidence is to keep doing challenging rides.

When I sign up for brevet rides, I don’t know in advance what the weather will be like on the day. If it rains, I’ll still show up for the ride — it’s only water 😉

This year on the Easter weekend I had done a 400 km two day ride by myself in near constant drizzle for much of the ride. The year before I had done a 300 km brevet around Mt Fuji, with rain for the first 150 km.

I own two different rain jackets, a pair of nylon pants and various gloves. My friend Jose once told me, “There is no such thing as bad weather, only the wrong clothes!” Over the years I have built some experience in how to deal with wet and cold weather on bike rides. 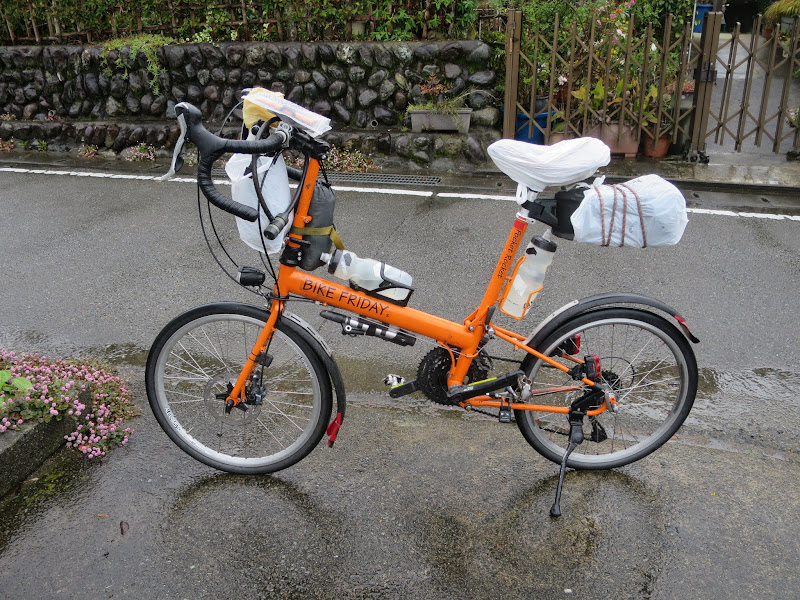 My goal was Tomin no mori (“Tokyo citizens’ forest”), a hiking trail head in the mountains west of Musashiitsukaichi station. To me the the real gateway to cycling in the mountains in Japan is not Mt Takao on the western edge of Tokyo but Tomin no mori. It’s not the steepest route, at up to 8-10 % on the steeper part of the final 10 km, but at 26 km from the station it is long and remote enough to test you and at about 1000 m elevation high enough for the temperatures to significantly change from below. If you have made this climb, you will be ready for any surfaced mountain road anywhere in Japan.

I started the ride around 08:00 wearing my rain jacket. After a while I could feel my knees getting colder and wetter from the drizzle, so I put on my nylon pants. On the way to Musashiitsukaichi (49 km from home) I stopped twice for coffee and food. After another break at a Familymart I headed up the mountain valley. 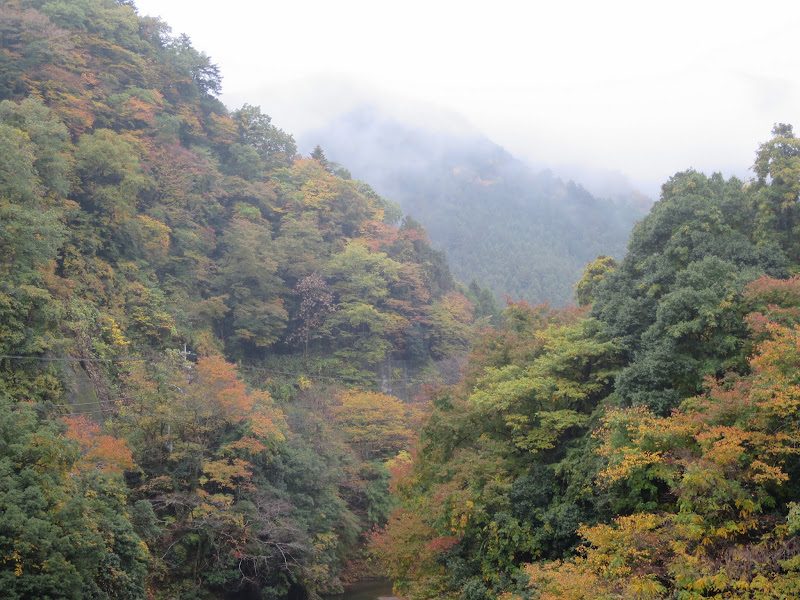 Normally the road to Tomin no mori is popular with cyclists, motorcyclists and boy racers in souped-up cars, especially on the weekend. Almost every time I cycle up there I come across the sound of an ambulance or police car rushing to an accident site. This weekend was different. I didn’t see any other bicycles or motorbikes. A guard at some road works told me he had seen maybe four other bicycles the whole day. 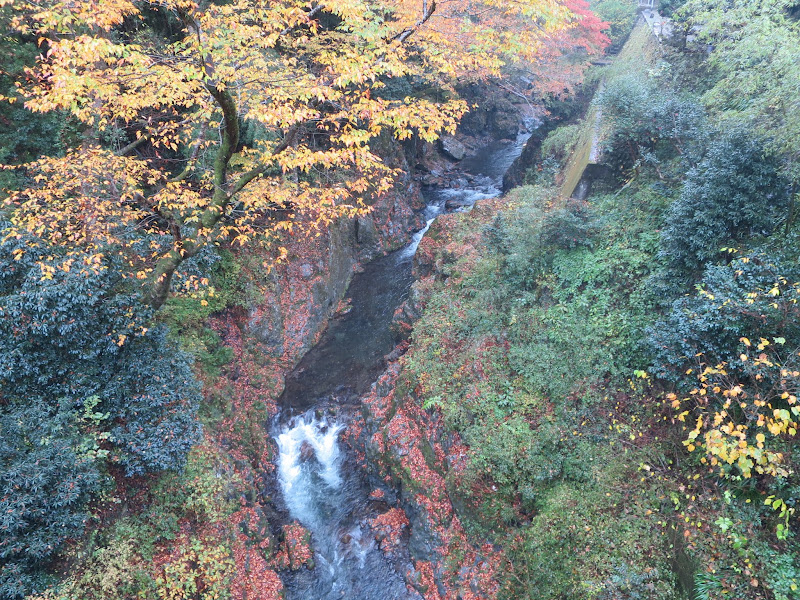 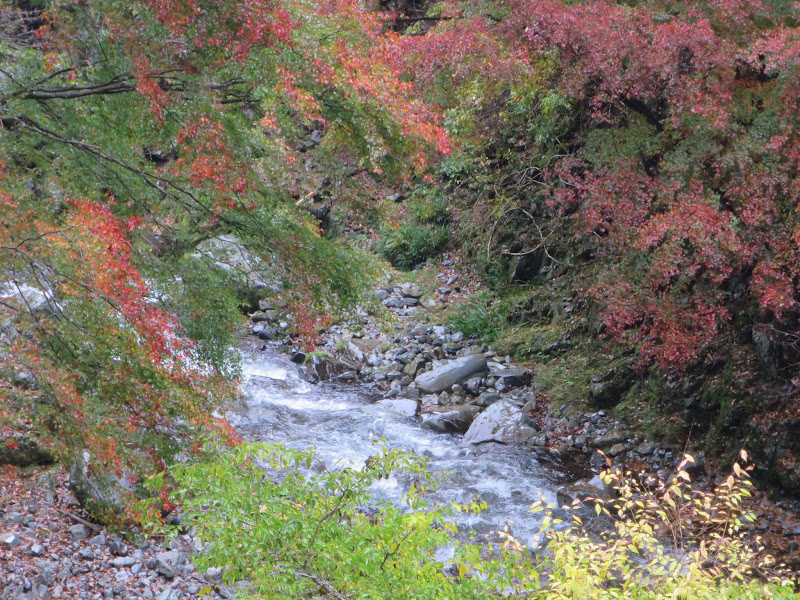 I loved the momiji (Japanese maple) leaves in green, yellow and red and the steaming clouds hanging over the forests. 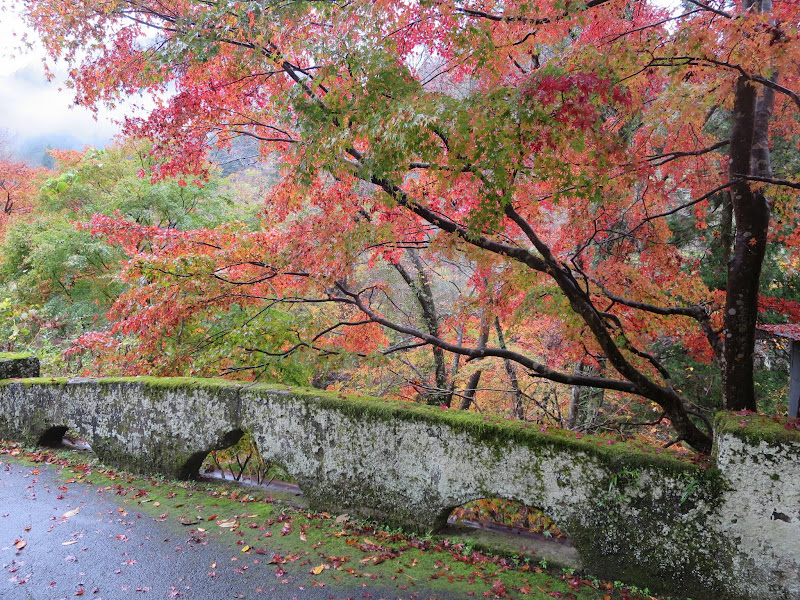 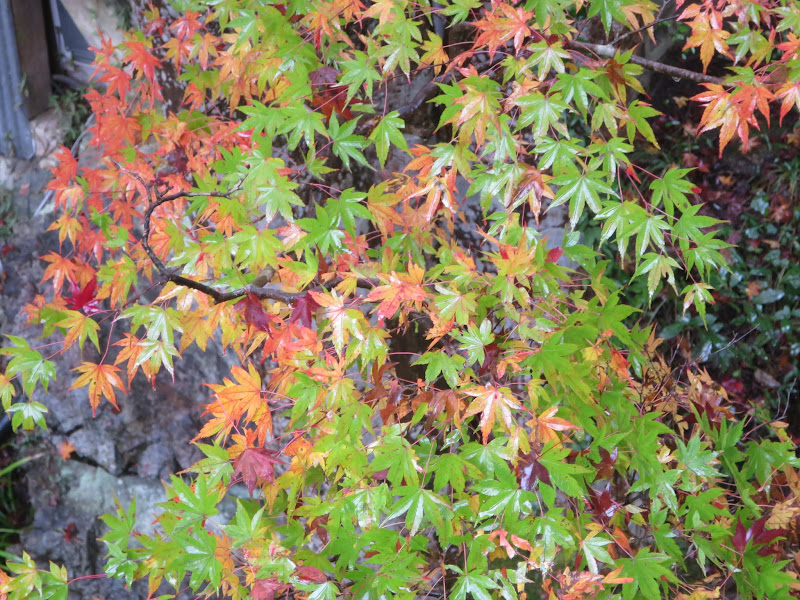 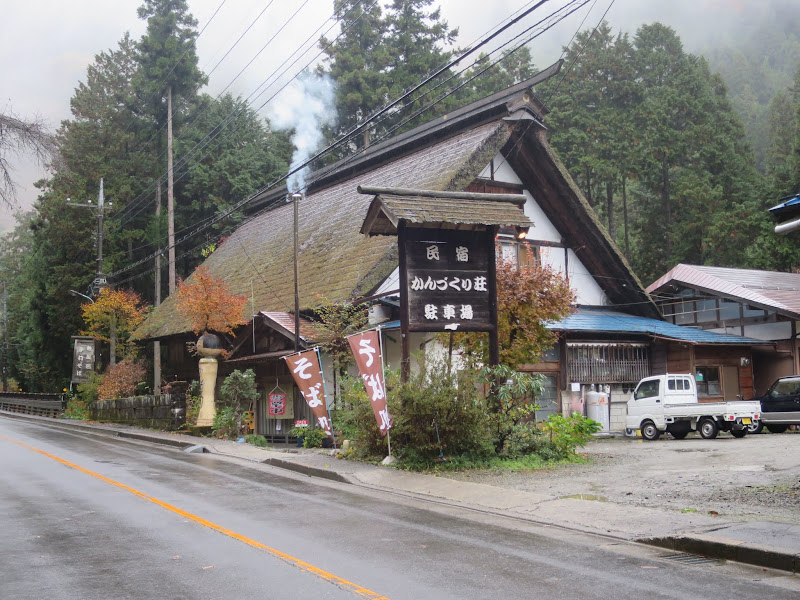 Three km from the top I passed a water fall. Even though the temperature was dropping, I felt warmer and warmer as I was working hard on the climb. I knew the descent would be much colder. 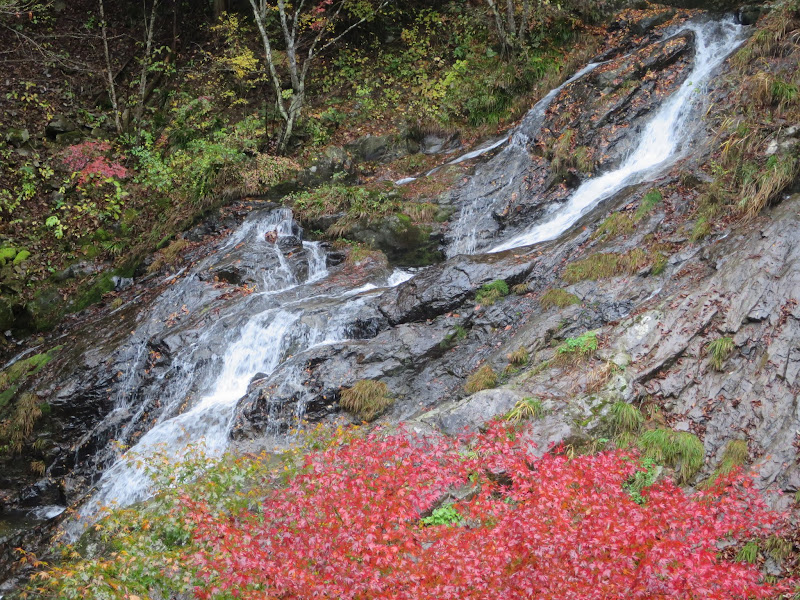 Finally I reached the entrance to the trail head. I parked the bicycle and ordered sansai (mountain vegetable) pizza with coffee. 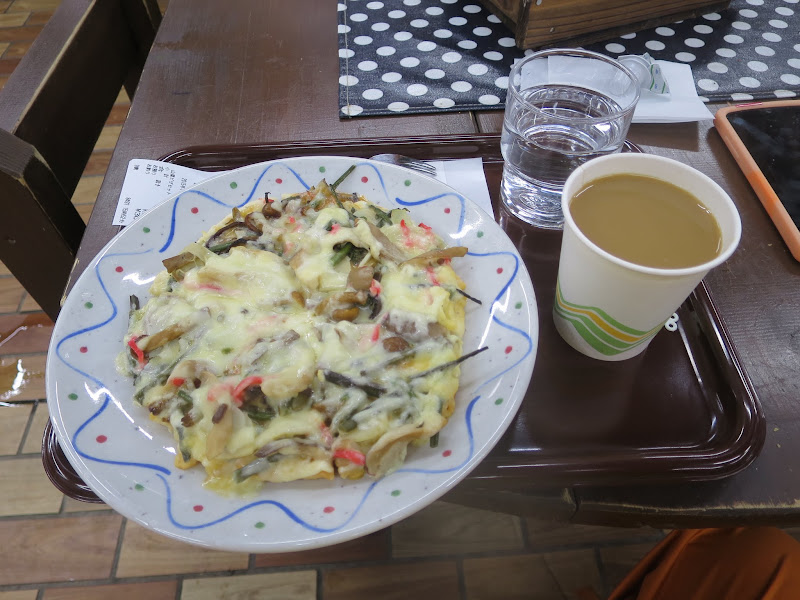 The rain had picked up while I had my meal, just as predicted by the forecast for the later afternoon and evening.

When I started the ride, I had considered three route options: 1) to Tomin no mori and back down again. 2) to Kazahari toge, the pass a few km above Tomin no mori and back and 3) over the pass and down to Lake Okutama, then downhill to Oume and down the Tamagawa for maximum distance. As I headed out I quickly decided that 1) was the only sensible option, given the real risk of hypothermia with my rain soaked shoes, gloves and sweaty clothes under the rain gear. I wasn’t even wearing a long sleeved jersey under my jacket and had brought no extra layers or dry clothes to change into.

The first 10 km of descending down towards Musashiitsukaichi were the coldest because it was so steep, I couldn’t really pedal to generate heat. After the route flattened out a bit I could work more and the chill eased off, though with wet feet and gloves it never became all that warm.

The disc brake was OK but had too much travel. I found the brake levers hit the drops before the brake was fully engaged. What had happened was that during the previous weeks I had done several mountain rides which had worn the pads and I had not readjusted the brakes to compensate. It was only when I got back to the Familymart that I got out my Allen keys and adjusted the inner pad to remove the excess play in the system that the brake started working as it should. I wish I had done that before the ride.

I had one nasty experience about 15 km from home: At one level crossing the road crossed the rails not at a right angle but diagonally and just as I was wondering how the gap would play with my tyres, the wheels went out under me as they slipped on the wet steel. I landed hard on my left knee and elbow. Though my rain jacket was OK, my nylon pants were torn at the knee and I had some abrasions on my skin. Next time I have to cross rails like that in the rain, I’ll walk the bike…

I got home without further incident after 150 km with 1200 m of elevation gain in the rain.

Next time I’ll do a ride like this I’ll bring along an extra layer for the cold descent and maybe a pair of dry socks and gloves as well. I’ll treat wet railway crossings with even more respect than metal sewer lids and any metal grates, because all of them are accidents waiting to happen.

I managed to keep my phone dry with a plastic cover, protected my camera in my breast pocket and kept the spare battery and USB cable for recharging the GPS out of the rain with strategically placed plastic bags.

I am still looking for a good way to keep my feet dry in the rain. I tried Bicycle Line shoe covers, but the largest size available was too small for my shoe size.

Also I need to figure out why despite mudguards at the front and the rear I end up with dirt water being sprayed onto the seat post bag and my back. Really, I need to find myself a better pair of mudguards, but there isn’t much choice for the 20 inch ETRTO 451 wheels of my Bike Friday Pocket Rocket.

Despite the accident and notwithstanding the coldest part of the descent, I wasn’t too uncomfortable for most of the ride and am glad to have seen the autumn foliage views around Hinohara village.