I bought my first video camera more than 30 years ago. I went for Hi8, a higher resolution version of Video8, as opposed to VHS or VHS-C which was also popular at the time. Since then I have switched device and formats several times. There was always the worry that I would lose access to my recordings as devices able to read the old media become obsolete or die or the recording media themselves fail from old age. Losing irreplaceable videos of our kids when they were little is something I really didn’t want to experience. Here is a short summary of how I have been dealing with these challenges.

Hi8 (PAL) – early 1990s
I bough my first camcorder when I still lived in Germany so naturally it used the PAL standard (625 scan lines, 50 Hz). I did a lot of analog video editing using an S-VHS VCR, which could interface to the camcorder using S-Video cables. Even after I moved to Japan which uses the NTSC standard (525 scan lines, 60 Hz) I kept recording in PAL. A Samsung multi-standard recorder allowed me to record from the camcorder to NTSC VHS tapes. I also bought a multi-standard analog TV that could display PAL, SECAM and NTSC. However, for many years I just collected the Hi8 PAL master tapes in a cardboard box.
Along came Digital8, a successor to Hi8 that as the name indicates used digital recording but was backwards compatible with Hi8 and could play the old tapes. So eventually, as Hi8 camcorders were already becoming obsolete, I bought a second hand one off eBay when I was visiting Germany. It had an IEEE 1394 (Fireware) connector that made it possible to copy digital video to a computer equipped with that interface. I experimented with PCs with plug-in IEEE 1394 cards, but ultimately it was a Mac mini that allowed me to copy the old Hi8 PAL tapes to a hard disc using the German Digital8 camcorder, a Firewire cable and iMovie which was bundled with macOS. The output files were “.dv” files. Some tapes were difficult to load and took many tries before the camcorder would even play them, but I was largely successful.

Hi8 (NTSC) – late 1990s
When my kids started going to kindergarten I finally switched to a Japanese camcorder, still a Hi8 model but for the NTSC standard (US/Japan). Like with the PAL camcorder I saved all the tapes in a box. The Samsung multi-standard VCR developed issues and we bought a new S-VHS VCR equipped with a DVD drive. It supported DVD-R, DVD-RW and DVD-RAM, the latter with caddies (cartridges). It also supported S-Video. It was relatively easy to use the S-Video interface to copy from the Hi8 (NTSC) camcorder to double sided DVD-RAM media. About 2 hours of video would become one 4.2 GB file on DVD-RAM. I chose DVD RAM because it supposedly was more robust than DVD-RW (especially with the protective case), but as Blu-ray came along DVD-RAM became less and less common, with many DVD multi drives not supporting it any more. In 2008 and 2010 I made a stack of 6 double sided DVD RAM media that held video from 21 Hi8 NTSC tapes, but when the DVD section of the VCR died, I no longer had anywhere to play them.
This year I finally bought a USB 3.1 DVD drive that also supports DVD-RAM, though without support for caddies. I went for the BUFFALO DVSM-PTV8U3-BK/N (2180 yen, about US$21). It worked very well once I removed the DVD-RAM disks from their protective caddy. I hooked it up to a Windows 10 machine, plugging the two USB cables into different USB ports (USB 2.0 for power, USB 3.1 for data). I copied the entire folder structure on each side of the media to a separate new folder on the server hard disk. The actual video information on a DVD RAM disk is in a file called VR_MOVIE.VRO which is found inside a folder called DVD_RTAV. The open source VLC player will play this .vro file, as well as the .dv file captured on the Mac mini from the Hi8 recorder.

MPEG (NTSC) hard disc recorder – 2000s
After the various Hi8 recorders I moved from tape to a hard disk based camcorder, a Toshiba Gigashot GSC-R30. This used a Toshiba-made 1.8″ notebook hard disk. It also had a USB 2.0 interface and could be connected to any PC. The MPEG files would play on any MPEG player with support for its audio codec, including VLC. Therefore backing up and preserving these videos was pretty painless.

Smartphones – 2010s and beyond
The Toshiba GSC-R30 was the last camcorder I ever bought. Occasionally I still shot video on my Nikon D3300 DSLR camera, but mostly I moved on to mobile phones which may not have had an optical zoom or as much recording capacity, but they were always in your pocket and so easy to use and the quality improved with each generation.

Don’t lose your media!
If you value the images and videos you recorded over the years, make sure to migrate them to recording media that you can access for years to come and keep doing that. Also make sure you have backups. Tapes, DVDs, hard disks and SSDs will all become unreadable at some point. Don’t keep irreplaceable files on one laptop and hope that it will work forever because it won’t. At the very least, buy a USB drive and make a backup copy. Even better, buy another USB drive, make another backup copy and give it to someone else in your family. It’s better to have your valuable data saved in more than one place.
I am a great fan of the VideoLAN VLC media player. You can throw just about any video or audio format at it and it will be able to play it. I highly recommend it! 🙂

Three months ago one of my brothers visited me from Germany and we had a great time together, but somehow in between taking him to Meiji Shrine, Harajuku, Asakusa, Kamakura and Mt Fuji, my old Sony DSC-W80 digital camera went absent without leave: It was there one day and I couldn’t find it the next day. It never showed up again and I’m not sure exactly where or how I lost it. 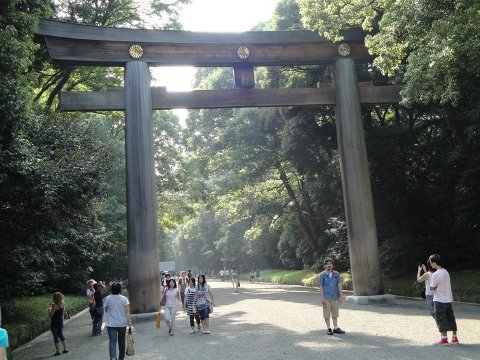 To be perfectly honest, the Sony DSC-W80 had been actually my least favourite camera so far, mostly because of its poor indoor / low-light performance. I was almost glad to have been presented with an excuse to start looking for a better replacement, even if it would cost me some money. Many point and shoot cameras attract buyers with ever increasing megapixel numbers, but draw them from a tiny image sensor that captures nowhere near enough light for all those pixels, so you end up with more noise and distortion.

Last Christmas I visited my sister in law’s brother in law, who is a photography enthusiast and owns a Nikon D90

with a 16-85 VR DX lens. He took some shots of us sitting around the kitchen table at what I would consider pretty minimal light (we’re talking Germany in late December after all!) without using a flash. The sharpness, the colours and the detail in the pictures were just amazing. I started reading up about the Nikon D90 and was very impressed. I later found the camera with a good quality kit lens, the 18-55 VR DX for about JPY 75,000 at Amazon Japan, but also looked at its lesser sibling, the D5000, which uses the same high quality image sensor as the D90 and D300, but a lower resolution LCD and is a bit cheaper than the D90 (just under JPY 60,000 with the same lens).

Back in the late 1990s I had a Canon EOS SLR (analog), but it developed a problem with its lens and I never bothered to get it fixed, switching back to compacts instead. What I found then was that actually having a camera on you usually is more important than owning a better camera. The best SLR or DSLR is of no use if you don’t have it within reach when an opportunity for a great picture arises. Cameras that fit into a jacket pocket ended up getting more use, since I was always reluctant to bring along the bulky camera bag needed to protect the SLR.

This is the reason why I have abandoned the idea of a DSLR for now (i.e. until I get rich and can afford a good DSLR like the Nikon D90 as a *second* camera for special occasions). Today I ordered the Canon PowerShot S95

, which Ken Rockwell calls the “world’s best pocket camera”. It combines a large image sensor with a compact body. Its main difference to its predecessor, the Canon PowerShot S90

is added support for 1280x720p video at 24 fps. In a few days I should know how it actually performs, as I’m planning to hike in the mountains west of Tokyo for autumn leaves viewing with friends. Then I’ll just need to make sure the Canon S95 won’t disappear like my Sony 😉

I ordered the camera at Camera Kaikan (camera-k.net) on Sunday morning and it was delivered on Monday morning, little more than 24 hours later. I bought a no-name 8 GB class 4 SD card for it. The class (i.e. minimum writing speed in MB per second) of the card matters only for video, where data streams to the card continuously.

You can get really cheap class 2 SD cards, but that’s not fast enough to keep up with the 720p24 HD recording mode supported by the S95. Various people in online forums were saying class 10 was an unnecessary expense while recommending class 6 as the base line. However, looking at the file size of a one minute clip I took, 720p24 HD seems to result in a data rate of 2.5 MB per second, or 37% below the 4 MB/s minimum required for class 4. So theoretically class 4 should work as well as class 6 for HD recording on the S95.

I am very pleased with the picture quality so far, but I’ve only started experimenting with the various modes and menus for manual control to explore its full potential. 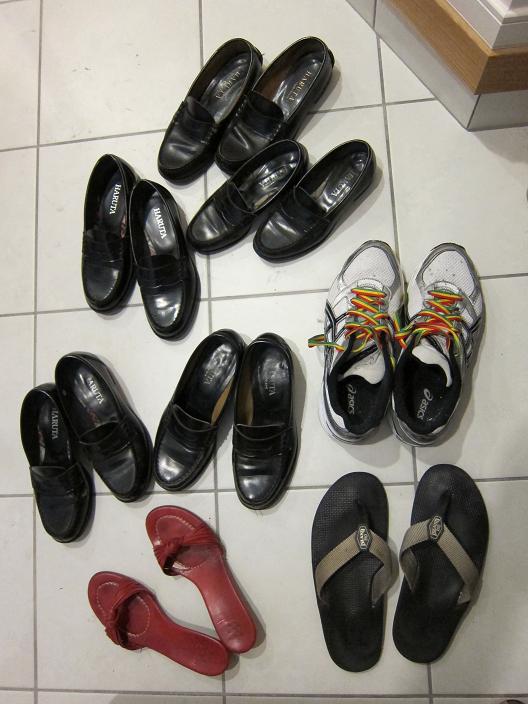