If you have read my previous article about the route of the Japanese Chuo Shinkansen, you will know that I am both interested in and sceptical of the high speed Maglev train route now under construction between Tokyo and Nagoya, later to be extended until Osaka.

I recently came across an insightful article by German train expert Sven Andersen in which he highlighted some serious drawbacks of the superconducting magnetic levitation technology to be used for the project. As he pointed out, despite its exorbitant cost the new line will only add about 25% of the capacity of the existing Nozomi trains and 19% of the capacity of the Kodama and Hikari trains (the former only stop at major stations while the latter also stop at intermediate stations).

The mix of different train classes on either rail and wheel based or maglev routes means that (without two separate tracks in either direction) faster trains will have to pass slower trains while those are stopped at stations, with a need for switches to direct them to alternative track sections around each station. A new type of switch had to be developed for maglev trains which did not even exist yet when JR Central already decided on maglev as the technology for the new line: A lengthy piece of concrete track with embedded magnets is push sideways using hydraulic pistons, which takes considerable time. This slow operation of switches limits how closely different classes of trains can follow each other or how closely spaced they can arrive at different platforms at a head station (Tokyo Shinagawa and Nagoya or Osaka).

If the new maglev line can only provide a quarter or a fifth of the capacity of the existing line then it will not really be able to live up to either objective.

Andersen therefore strongly favours rethinking the plans by going for a rail and wheel-based approach on the new line. Though it would limit top speeds to 350 km/h instead of 500 km/h, it would allow many more trains to be run per hour, which dramatically increase capacity. It would also make it possible for trains operating on the new line to interconnect with the existing rail network, e.g. on to Hiroshima, Kyoto and other parts of Japan, instead of passengers having to get off one train with their luggage, ride 10 floors of escalators and then board a different train to get to their ultimate destination.

Like the German Transrapid Maglev system that was a commercial flop, the Chuo Shinkansen without wheels and rails will be an island within the rail network of an island – an amazing technical feat, but not really a solution for the needs of passengers in Japan and elsewhere. 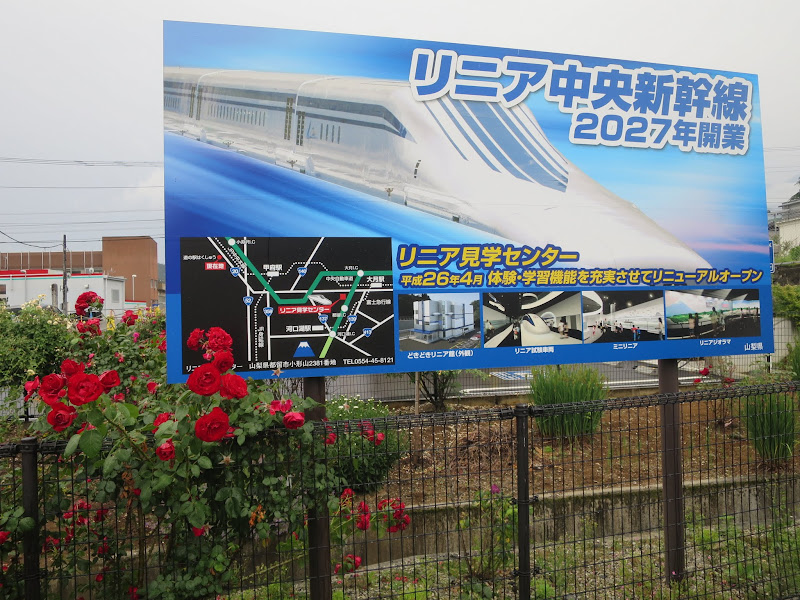 Not many cars drive on prefectural road 35 near Akiyama, but I’ve cycled there many times on the way to or from Tsuru city during brevets and other long rides. Akiyama’s claim to fame, other than being a charming rural backwater, is it’s Maglev test track, which will grow into a section of the 286 km Tokyo-Nagoya line scheduled to open 10 years from now in 2027. 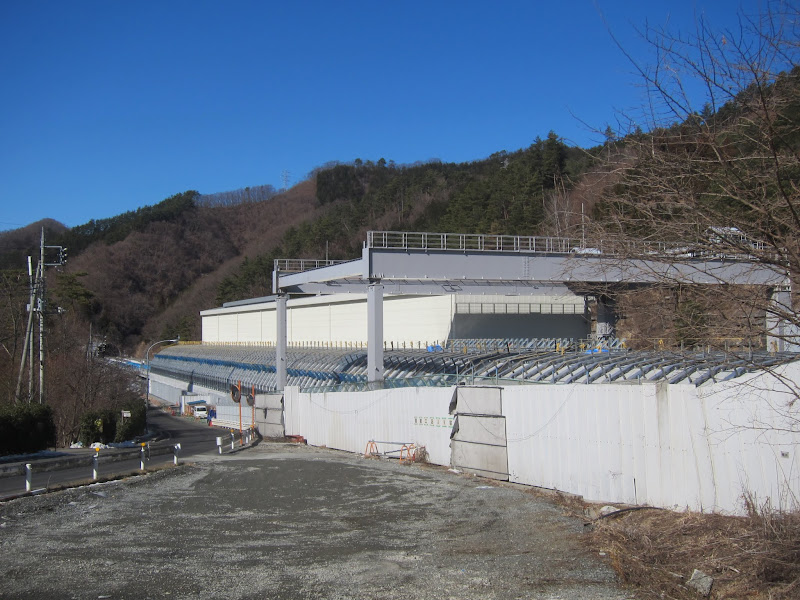 The test track was built in the 1990s to develop and test prototypes for the train and track, first 18 km in length, then extended to 42 km to be able to test the train at higher speed. The best detailed summary about the route that I’ve found so far that is not in Japanese is this (in German).

Ten years is not a very long time for a project of this scale, especially when there is always the risk of unforeseen difficulties during tunneling (the known unknowns). A 25 km long tunnel will run between Hayakawa in Yamanashi and Oshika in Nagano. Construction has started at both ends. As the Maglev train needs a near level track, this will be a base tunnel at low elevation. Consequently there will be 1400 m of rock above at its deepest point.

Near the end points at Tokyo and Nagoya, new stations will be built under existing train stations (Shinagawa station in case of Tokyo). The lines will run in tunnels at least 40 m underground. Under Japanese law (“Deep Underground Law”), construction at least 40 m below the surface can be done without having to purchase the land above, as long as its purpose is deemed to be in the public interest.

The Chuo Maglev line has been called the world’s longest subway line, as more than 85% of it will be in tunnels. From Shinagawa the tunnel will first run southwest towards the Tamagawa, passing Senzokuike and crossing the river near Todoroki (between the Daisan Keihin and Tokyo Toyoko line bridges).

It continues on the Kanagawa side towards Sagamihara. Avoiding Machida to the south and Tama New Town to the north, it will run south of Onekansen. The first stop after Shinagawa will be near Hashimoto station, to connect it to the existing rail network (JR Yokohama line, JR Sagami line, Keiō Sagamihara line) with proximity to the Ken’ō Expressway. The Maglev line will cross the Sagami river on a bridge, heading between Tsukui-ko and Miyagase-ko.

A 50 ha railway yard for maintenance with train depot is planned near Toya, which my cycling friends mostly remember for the Sunkus convenience store north of Miyagase-ko. From there the line tunnels west through more mountains to the existing test track.

Altogether there will be 9 emergency exits that connect the line to the surface in the tunnel section near Tokyo.

If you check Google maps for the satellite view, you’ll see the test track line emerge to northwest of Tsuru. where it crosses national route 139 from Otsuki to Kawaguchiko. If you drive out from Tokyo on Chuo expressway, you can see the line cross over the expressway on a bridge. There’s a Yamanashi Prefectural Maglev Exhibition Center nearby.

Heading further west into Yamanashi, the line first stays a little south of Chuo mainline and the Chuo expressway, before those two swing northwest while the Maglev route heads straight west. You can see it emerge for shorts covered bridges near Hatsukari, then pop out for longer viaducts as it crosses national route 137 and prefectural route 36 on the edge of the big Yamanashi plain. The current end of the viaduct is at Fuefuki, Yamanashi, according to Google maps.

There will be a station for Yamanashi prefecture in Ōtsumachi near Kofu, with access to JR Minobu Line. [CORRECTION: Any transfer between Yamanashi station and any of the JR Minobu line stations will have to involve either buses or a yet to be built monorail, tram or other light rail infrastructure.]

The Yamanashi plain is where most of the above ground distance of the line will be found. The viaduct sections will either have noise barriers or complete covers. A main reason to opt for viaducts in this area is the relatively high water table, which would complicate tunneling.

The debris from 246.6 km of tunnel drilling amounts to 56.8 million m3 (some 145 million t by weight) that will be deposited at locations along the line.

Personally I’m a skeptic about this project. The time savings compared to regular bullet trains are relatively minor, once you factor in that most people will also spend a fair amount of time getting to and from one of the Maglev stations via conventional public transport.

For the people along the line who don’t live in Tokyo or Nagoya, they get one station per prefecture. Chances are, with Japan’s population on the decline, as the new line starts up that train services on the JR Chuo line, which runs somewhat parallel to the Chuo Shinkansen line, will get thinned out. We’ve seen the same thing with bullet train lines that opened that lead to cutbacks on other regional train connections.

So how much time will people actually save, if they don’t happen to live in Shinagawa and want to go to Nagoya or vice versa? Even Nagoya is only a halfway solution without the extension to Osaka that isn’t scheduled to be completed until 2045 (or 2037, if the central government steps in with a huge loan).

I think the only thing we can say with any certainty about benefits from the project is that, yes, the construction companies and the suppliers of equipment will benefit handsomely. Drilling and lining 247 km of tunnels with concrete and pouring some more of it for 24 km viaducts and 11 km of bridges will make them some money but will add a fair amount of CO2 to the atmosphere. The air resistance of trains at 505 km/h and therefore their energy consumption will definitely be higher than that of conventional trains. One source I saw listed it as having a CO2 output of 2-4x that of conventional commuter trains (not sure how those compare to a shinkansen).

Nevertheless, the dice have been cast and construction is under way. I will try and find more information about where construction is going on and what parts can be explored on bike rides or visited. You can already get train rides at the Maglev visitor center in Tsuru. There was some discussion of extending the test track 7 km to the west and building a station by 2020 to be able to offer test track rides as far as Kofu by the Olympics but without the Kanto connection that seems like a gimmick to me. I doubt that’s going to happen, as all kinds of construction projects are already competing for capacity before the magic Olympic year, driving up prices and busting budgets.