My most memorable trip this year probably was the one to Buenos Aires, Argentina for an ICANN conference. Argentina was very interesting. Culturally, I found it far more Italian than Spanish despite the language spoken. There is a certain sadness about the place, because Buenos Aires clearly has seen better days. A hundred years ago the country had a higher per-capita income that many European nations and yet its history is one of missed opportunities and crushed dreams.

While it’s clearly not a rich country and many people there are struggling, I was also impressed how people look after themselves. I saw relatively few overweight people (regardless of income levels) and the food was very nice. The local wines were inexpensive and excellent. I soon discovered Torrontés, a local white grape variety that is similar to Gewürztraminer and Muscat grapes. It’s very aromatic. 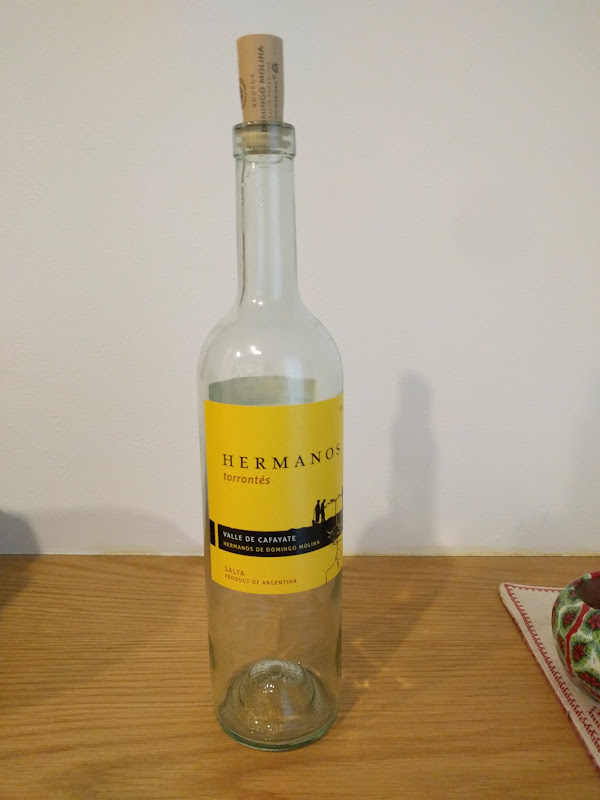 Not long after returning from Argentina I found some Torrontes at the local Kaldi import shop near my home. During three subsequent U.S. trips I searched local wine shops for more examples for my modest collection. My latest favourite is Domingo Molina Hermanos Torrontes 2014:

Brothers – we played soccer, we fought a lot, we generally caused trouble for our parents. But we Domingo Brothers (“Hermanos” in Spanish) became the best of friends, and 50 years after our father and uncle opened a winery, we started one of our own on a hillside above Cafayate. We named the winery Domingo Molina – Domingo for our father’s last name and Molina for our mother’s. Over the decades, our family has located the best vineyard sites in Salta Province, all 5800 – 7300 feet above sea level. This extreme altitude and 340 days of sun yield wines with intense aromas and soft tannins which are a pleasure to drink, especially with our brothers – Osvaldo, Gabriel & Rafael – the Hermanos de Domingo Molina.

Growing up with four brothers, this struck a note with me and I picked it up, along with two other bottles I have yet to try. Once I opened it, I just loved it. It compared well to the best Torrontés I had enjoyed in Buenos Aires.

If you like whites and are looking for something beyond Chardonnay, give Torrontés a try. To me it was one of Argentina’s best kept secrets.