In a Fleche, teams of 3-5 bicycles have 24 hours to ride a distance of at least 360 km towards a central meeting point. I had successfully participated in a Fleche in 2019. Two members of the 5 person team this year were different from last year. Like last year, only 4 of them actually rode.

Our event team name was “Maillot 24 Tokyo”, a pun on the fact that we were going to ride 24 hours (“ni shi”) to Tokyo in our new AJ NishiTokyo jerseys. The 2020 run was originally scheduled for April but due to Covid-19 it got pushed to October 17-18. Because virtually no randonneuring events have taken place from April to September, many randonneurs’ fitness has suffered and DNS (“did not start”) is more common than usual.

I had been watching the weather forecast closely. Our start was in Toyohashi, Aichi prefecture and the planned goal in Totsuka, Kanagawa. Normally, the prevailing wind conditions would give you something of a tailwind along this relatively flat course. We had only about 1000 m of elevation gain in the first 2/3 (240 km) of the ride. However, as the date of the ride came closer the forecast became rainier by the day. Ultimately it rained on Saturday from before the start to when we decided to officially DNF (did not finish) in Okitsu, Shizuoka after midnight. The north-easterly headwind that we had for most of Saturday more than made up for the relatively flat course. That and three punctures by one team member meant we could not finish within the time limit. We did finish the ride on Sunday after just a few hours of sleep at a Kenkoland hotel and public bath, riding back to Kanagawa and Tokyo together. 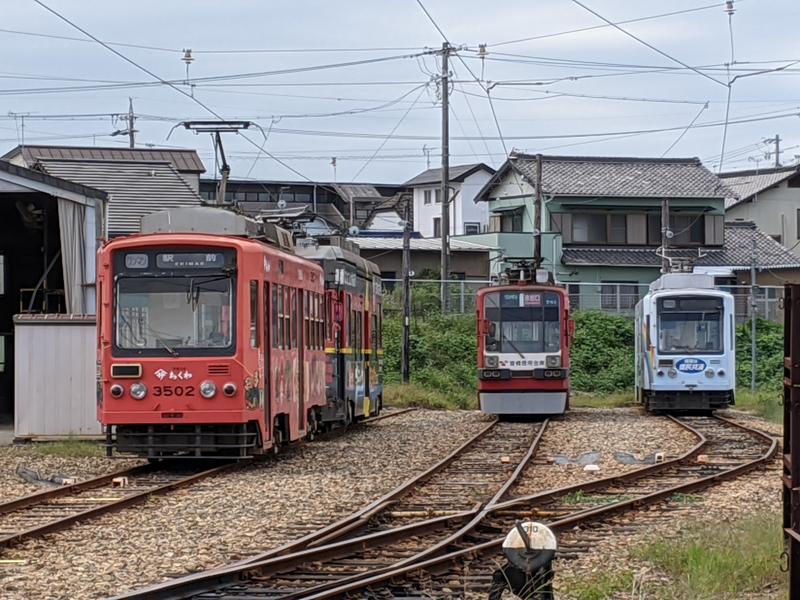 I made my way to Toyohashi by car on Friday. Everybody else took the shinkansen. I drove to Lake Hamana (Hamanako) halfway between Hamamatsu and Toyohashi. There I unloaded the bike after which my wife and daughter headed back in our car for a separate adventure. After 26 km I arrived at the hotel a little after noon. Since I couldn’t get into my room until 15:00 I first had lunch at a convenience store on us tax payers (1000 yen Go To Travel coupon) and then explored the city by bike. Toyohashi has a castle museum, which is free to visit, in what is now the city park (formerly the castle grounds). After I checked into my room the other participants arrived, minus one who chose to DNS due to the weather forecast. What a sensible person! 🙂 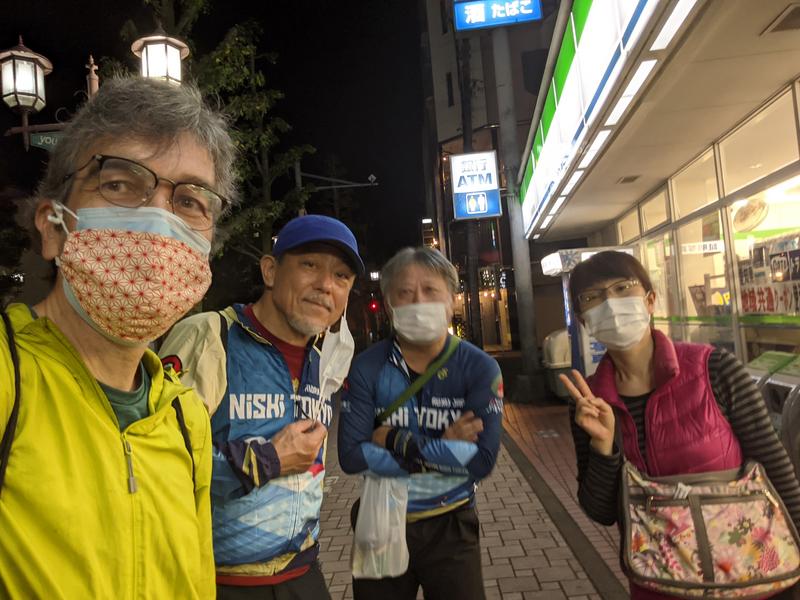 While preparing the bike in the morning I decided that I was going to be too warm in my full rain gear, even with 11 C. I wore my rain jacket on top of my base layer and team jersey, but not the rain trousers — just my regular uniqlo shorts (65% / 35% polyester / cotton). Only on the last convenience store stop before sunset did I finally put on the rain trousers, as well as a windbreaker under the rain jacket. That was perfect temperature-wise. 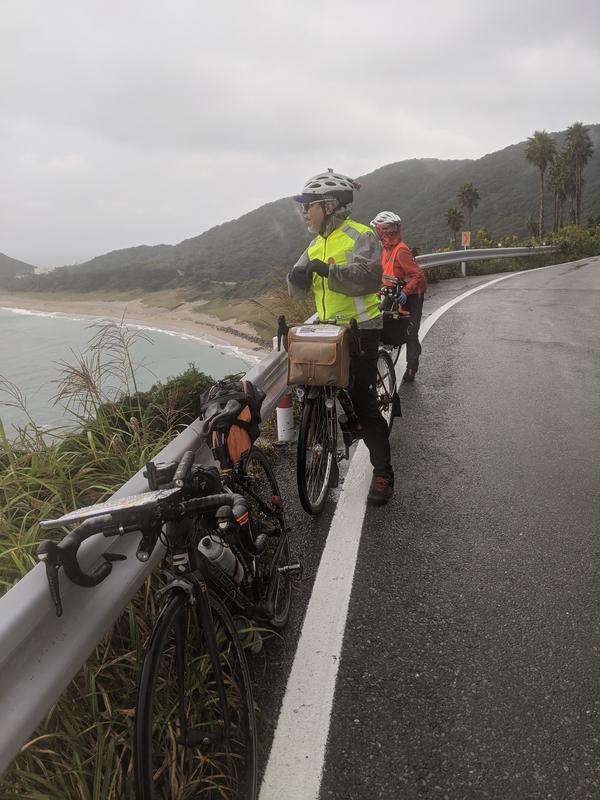 The weather was very gloomy all day, with a steady drizzle and wind. There were no other cyclists around as we headed out 45 km to Cape Irago, the westernmost point of our ride. 7 km later we did our first convenience store stop for a 15 minute break. Then we headed east along the coastal road. After about 105 km we stopped for lunch (ramen and gyoza). It was only 11 C for most of the morning. I think the warmest we saw was 16 C around Shizuoka-shi.

These are two of the 5 bridges running side by side on the southern end of Lake Hamana, where it drains towards the Pacific. 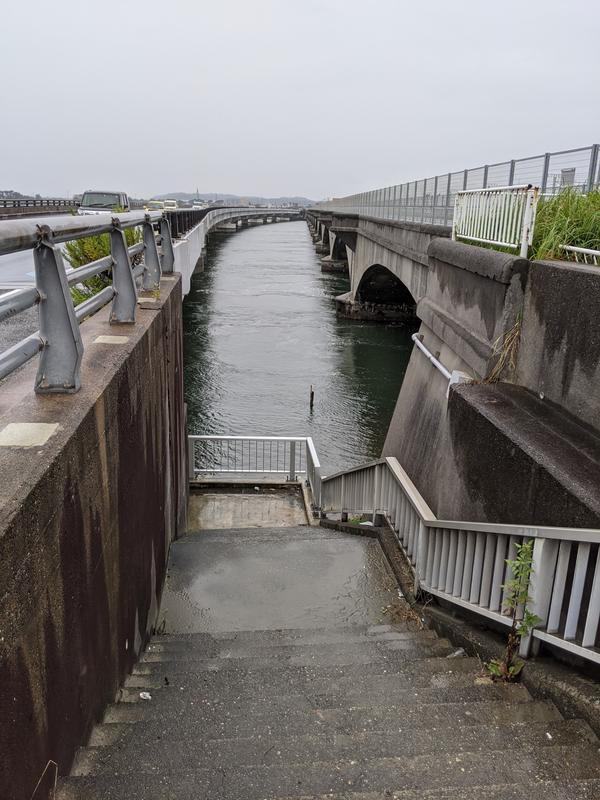 Hamamatsu in Shizuoka is home to both Kawai and Yamaha pianos. You can actually tour the factories by appointment (or at least you could before Covid, not that we would have had time for that). Both Aichi and Shizuoka have a lot of Japanese-Brazilian immigrant workers, so Portuguese tends to be a common second language on signage, like Russian in parts of Hokkaido and English in the rest of Japan: 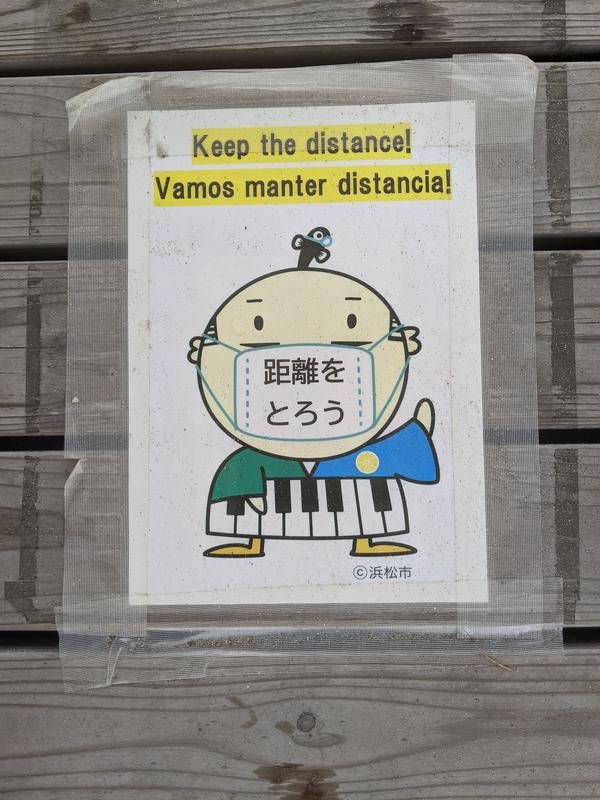 The Hamaoka Nuclear Power Station in Shizuoka is one of the most tsunami-exposed plants in Japan and mostly upwind from Tokyo. It sits directly above a fault line where two tectonic plates meet in a subduction zone (the most dangerous type of fault line – 9 of 10 of the biggest earthquakes in the last 100 years happened at subduction zones). All 5 units at Hamaoka were shut down in 2011 and a planned sixth unit was cancelled. 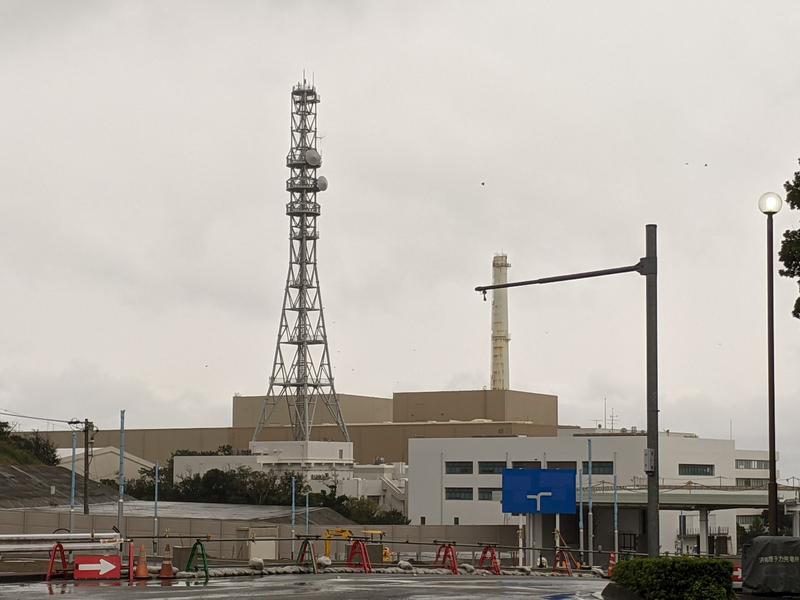 After 166 km we passed Omaezaki, another cape. The Shizuoka coastline turns north there. From there we were heading up Suruga bay, with the west coast of Izu across the sea. You could have admired the west Izu coast and Mt Fuji if the weather had been good, which of course it wasn’t. 2 km after we took checkpoint pictures at the cape we stopped at another convenience store. I completed my rain wear and thermal layering as it would soon get dark.

At one point we lost two riders at the back and turned around to find them fixing a front wheel puncture in the dark. Later in the ride the same bike punctured at the rear wheel, twice. Eventually we used up all 700C spare tubes we had (two of us ride 650B and rely strictly on our own tubes). 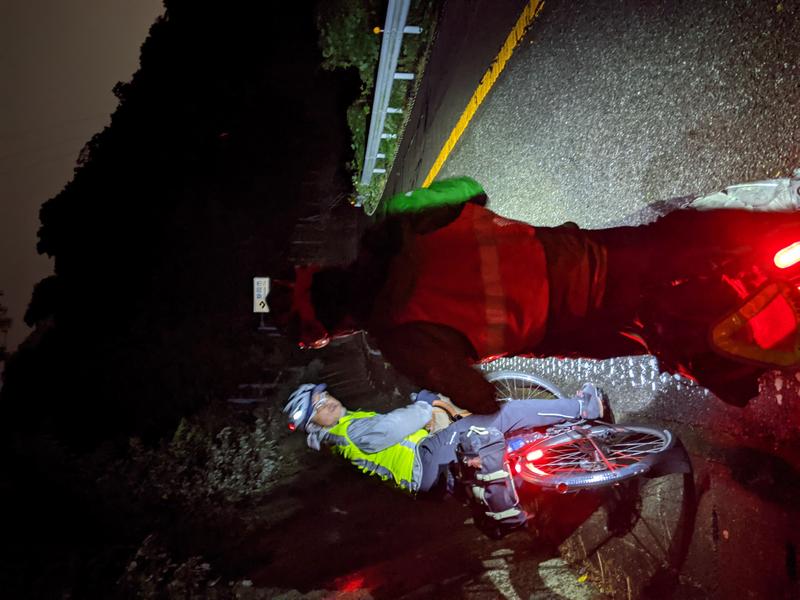 By then it was getting clear that we could not stick to the time plan and that we wouldn’t make it in time. The headwind and rain were too much of an obstacle to that and the punctures didn’t help. We stopped for dinner at a Cocos restaurant. Our ride leader suggested taking a break for the night at Kenkoland Suruga in Okitsu, where he had rested at brevets before. I was very reluctant to do that as it would effectively have cut my biggest ride of the year in two. For me, technically one ride ends once I sleep in a bed. Ultimately I am very glad though that I finally went along with the change of plan. I would have missed the best part, even if that 403 km ride sort of is two rides now.

Close to 1:00 we parked our bikes in the car park of the Kenkoland. Fortunately rooms were still available and Go To Travel discounted the room rate with breakfast. I set the alarm for 05:30 and was out like a match after my head touched the pillow. When I looked out of the window in the morning the rain had stopped. On the very left I could make out one side of Mt Fuji with fresh snow on top, then many smokestacks of chemical plants near Fuji City, with the Izu coastline to the right. I was very happy about the change in weather. Breakfast started at 06:00 and we were out and on the road again around 07:00. 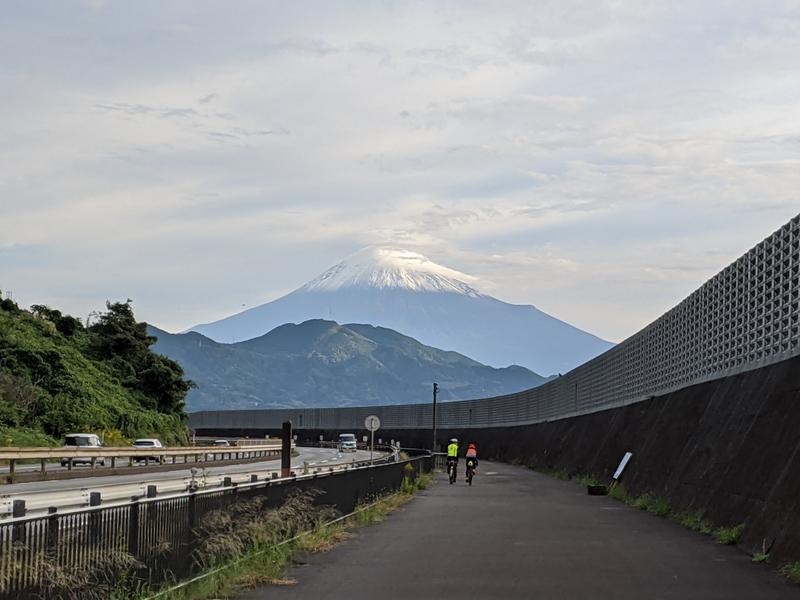 Within minutes we got great views of Mt Fuji. Our course joined the Old Tokaido road, on which people had travelled on foot between Kyoto and Edo back in the old days. 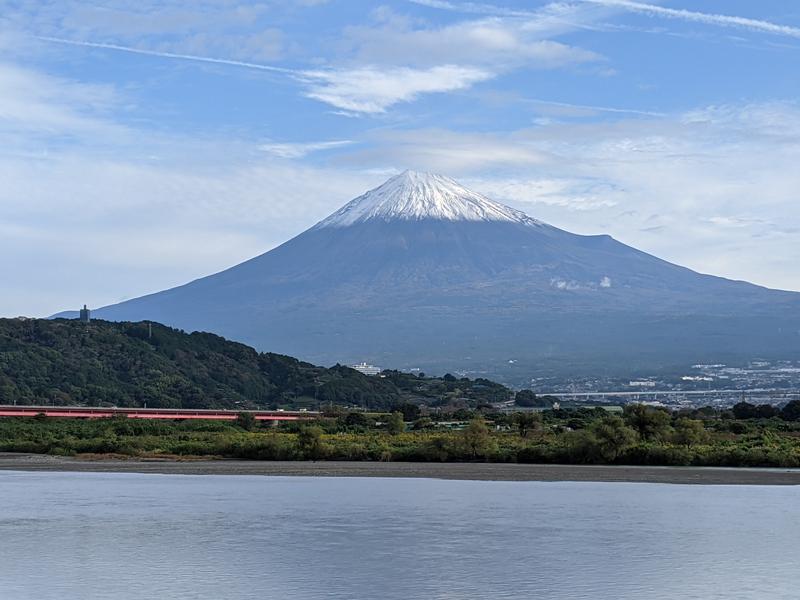 About 260 km from the start we crossed the bridge over the Fuji river, which is a big turning point in the 300 and 400 km brevet courses of AJ NishiTokyo. Here the ride joined up with rides from Tokyo that I had done before. It’s crazy when you feel like you’re almost home but actually still have to cycle another 140 km! 🙂 Somewhere on the way to Numazu we switched from the road to a bicycle path on top of the tsunami barrier at the beach, which continued for many km. The views from there were fantastic and we took time for pictures, now that we didn’t have an arrival time to beat.

After Numazu and Mishima the road climbed into the mountains south of Hakone to Atami pass. I had crossed Izu only at Hakone or further south between Shuzenji and Ito. More Fuji views in the mountains. On about 10 km we did one fifth of the total climbing of the 400+ km ride. We passed the MOA, an art museum near Atami. The descent to Atami was very steep and treacherous (one minor crash but the rider could continue). I was glad I had disk brakes and wide tires for traction.

Once we got closer to Odawara,traffic got quite bad, as it usually does on a Sunday there, especially as this was a day with decent weather immediately after a rainy day. 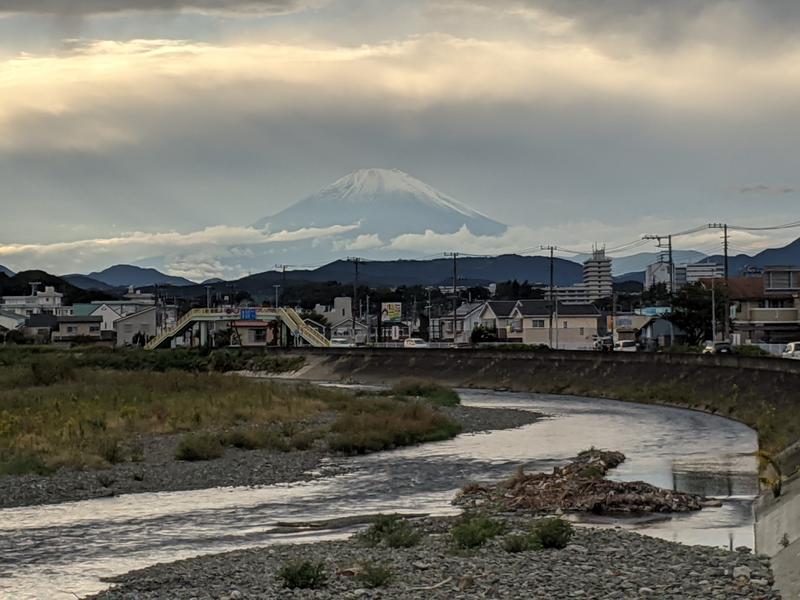 As we had officially called in our DNF already, we were all free to go any way that would work for us. The ride leader and another member headed to Odawara station to have a meal together before using their rinko bags for the train ride home. Another member and and I cycled back another 73 km to Tokyo via Rt135 and then Rt246 which again was very busy. But we got home safely about 36 hours after we had started.

A few things I took home from this ride:

Preparation for an event like that is really important. I had all the clothes I needed, all the cables and other electronic gear, no issues whatsoever and I also didn’t really carry anything bulky or heavy that was unneeded on this ride. Recent rides in cooler and partially wet weather had helped me figure what clothes to bring.

Physically I was well prepared due to my recent long rides. It was my 10th ride of 150+ km since the beginning of August. One of them was another brevet (i.e. with time limits), others were rides with faster friends (Thanks, Peter!).

I was very happy with the new GPS. The Wahoo Elemnt Bolt performed flawlessly. I rode the last 160 km without recharging, but on Saturday I could also charge it on the handlebar in the rain without issues. I loved the way it announced turns from the RWGPS cue sheet. The maps on the unit aren’t great but workable until you zoom out too far.

Sleep planning also worked well. I got sufficient sleep the week before. The day before the ride I got up early, which made it easy to go to bed early and fall asleep easily the night before the ride. The short night at the Kenkoland worked out pretty well too.

Two major changes I would make:

I need mud flaps for the mudguards to keep spray off the shoes, especially going through puddles on the road. That would also prevent lubrication issues on the chain. I had to relube with donated chain lubricant on the second morning (I had some in the bottom of the bag but my friends saved me from having to search for it) as the splashing water had washed off too much oil.

And I want some shoe covers for the rain, to definitely make sure my socks will stay dry when it’s wet out there. I had brought a second pair of dry socks which I used on day 2, but I could have done better with proper shoe covers.

I am glad I didn’t stubbornly continue the ride on my own without a hotel stop in the early hours of Sunday. Day Two was much more enjoyable with my friends and safer too.

I would join another Fleche ride in a heart beat. With a good team it’s one of the most enjoyable formats of randonneuring. 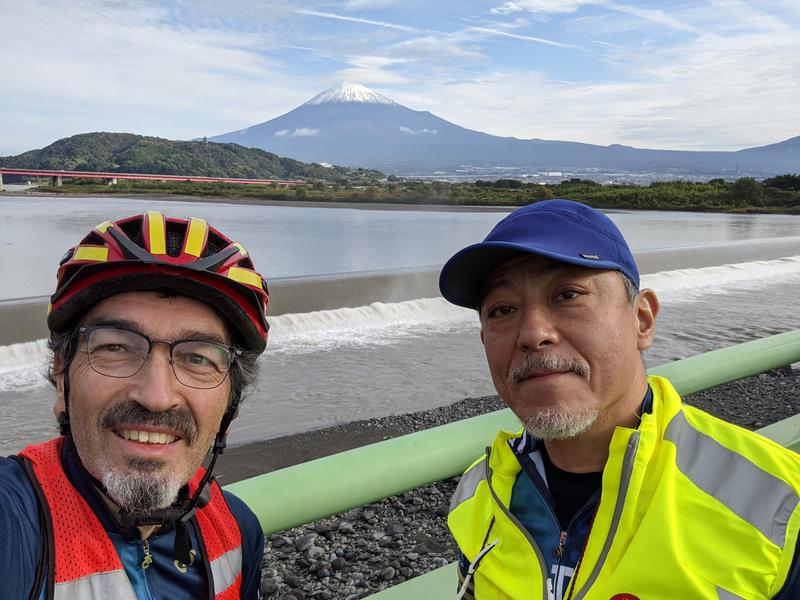