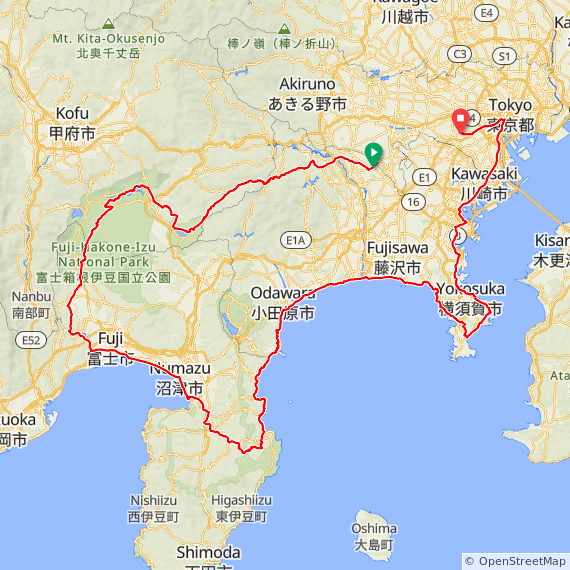 On Saturday/Sunday April 20/21, 2019 I rode the Flèche ride I had signed up for in December. This will probably remain my biggest ride for the year.

The objective in a Flèche is to cover as much distance as possible in 24 hours as a team, with a minimum of 360 km. You can not stop at any place for more than 2 hours and you have to cover at least 25 km in the final two hours of the ride. Teams consist of 3-5 members, with tandems counting as one member. At least three members who have ridden the entire route together have to reach the goal. Traditionally Flèche rides are held on the Easter weekend in France. In other countries dates may differ because of the climate, but the Audax-Randonneur Nihonbashi Flèche did coincide with Easter. I was part of Team NishiTokyo and the ride started from Machida.

There were supposed to be 5 of us, but one person did not make it to start, so only the 4 of us took off at 07:00 on Saturday. The three others were seasoned randonneurs. Ride leader Mr O. participated in Paris-Brest-Paris in 2015. In fact he was wearing the hi-viz vest from that event. I had first met him at a 600 km brevet. Last year Mrs N. won the Audax Japan “Randonneur of the Year” award: She completed a 2400 km brevet around the coast of Hokkaido, i.e. twice the distance of PBP. Mr D. organises brevets for AJ NishiTokyo.

I had little doubt that I was going to be the weakest rider in the team but it was going to be a team effort in which we would always ride within sight of each other, not even WATT on climbs but climbing together. I rode to Machida the evening before to spend the night at a cheap hotel (Toyoko Inn Fuchinobe, under 5,000 yen per night). Trying to minimize luggage this time and with no rain forecast, I opted for shorts, a short sleeve jersey, a light wind breaker and a t-shirt to wear as a base layer for when it was colder. I wasn’t sure if that was going to be enough. I was the only one in bare knees and my ride mates wore long sleeve jerseys, but it worked out temperature-wise and I never felt too cold while we were in motion. At the Nishi Izu brevet on March 30 I was also the lightest dressed participant. 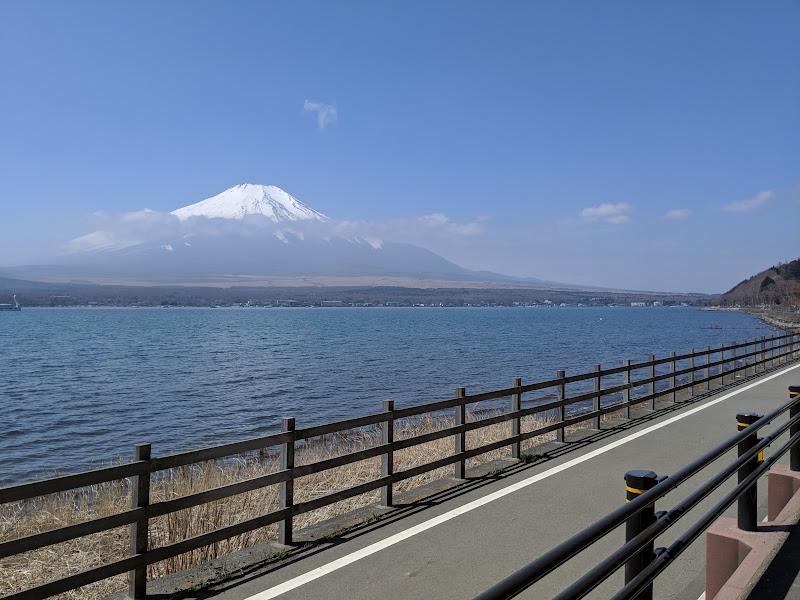 Mr D. had prepared a cue sheet with average speeds between all the turns and major landmarks. Besides the PCs (points de controle) for which we needed to collect receipts to document that we passed there, he had also picked three Japanese restaurants for 30 minute meal stops. Normally on long distance rides and brevets I only eat food I buy at convenience stores or dried fruit I buy before, as it saves time. So I knew we would have to be riding considerably faster in between the stops. We also cut out all photo stops. All pictures I took we either stopped for a different reason (PCs, traffic lights, etc) or I took shots while in motion. We didn’t even stop at Yamanaka-ko for a group picture with Mt Fuji. 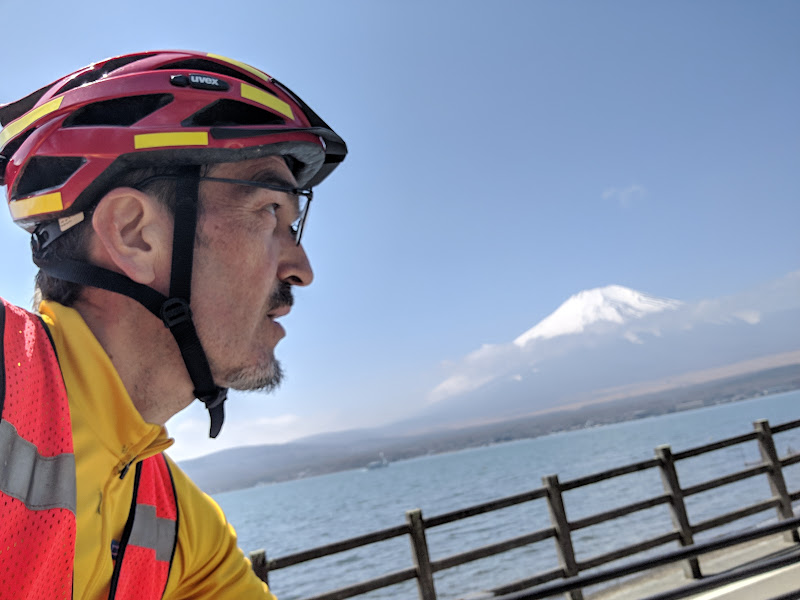 Mr O. had only slept for a few hours before the ride, but he led the group for almost the entire ride. His speed was very consistent. Mr D. was in second place, then me, with the rear covered by Mrs N. who made sure we stayed together. Sometimes she would suggest for me to speed up “if possible” to close a gap with Mr D.

After we crossed from Kanagawa into Yamanashi on Doshi-michi (Rt413), Mr D. started having problems with his knee. He had already abandoned a 300 km brevet the weekend before because of knee problems, which he didn’t want to exacerbate. We traded places, me moving up to Mr O. and him being followed by Mrs N. Even if he had to drop out of the Flèche we could have completed as a team because we still had three people, but I was also worried about Mr. O.’ s lack of pre-ride sleep.

At Michi-no-eki Doshi we had a short break. Like on my training ride to Yamanaka-ko two weeks earlier there were lots of motorcycles about. There were fewer bicycles than I expected. A new cycling base shop had opened not far from the road station, no doubt trying to capitalise on the increasing interest in Doshi road from the 2020 Olympic road race course.

We made it to the Doshi-michi Yamabushi-toge tunnel 10 minutes ahead of schedule, about 60 km from the start and at 1130 m elevation. I expected we’d be OK time-wise if we made it there on time since that first 1/6 of the course had almost half of the elevation gain. The legs got a short respite on the descent to Yamanaka-ko. the cherries were in bloom along the lake but we kept our pace towards PC1, where we only stopped briefly to collect receipts. A few km after that we pulled into the parking lot of a noodle shop. The food was served quickly. We used the toilet after ordering to minimize time.

Along Kawaguchi-ko Fuji was not as clearly visible as before and we picked up a head wind. Via Saiko we climbed to the main road and then Rt71 through the Aokigahara forest. We didn’t stop for the view of Motosu-ko at the pass but headed for the descent towards Shibakawa on the Fuji river. On the west side is was colder and Fuji was totally obscured by haze or clouds. I did put on my wind breaker for the 30+ km descent. We made it to the Familiymart at PC3 almost an hour ahead of schedule. It was now the middle of the afternoon.

We turned east at the Fuji river bridge towards Numazu. First there were a lot of traffic lights but then there were longer stretches in this urban area where we could just keep on going. Everybody had a story to tell where someone had slept by the roadside around here on some brevet or other. For the first time Mr O. slowed down a bit as he was getting sleepy. We turned south into Izu and 35 km after PC3, stopped for another restaurant. While we waited for the food, everyone was sending out pictures from Yamanaka-ko, to let others know we were OK.

Evening approached as we headed into the center of Izu, past Shuzenji and up into the mountains. Mr D.’s knee problems became worse and he had to call for a break. Mr O. probed his leg muscles with his fingers and it seemed to help. We climbed to the pass in the dark, now considerably slower to help out Mr D. but it also made it a lot easier for me. At the top I put on my wind breaker again for the descent towards Ito. We had used up some of our time savings but still reached PC4 ahead of schedule.

We saw fireworks light up above the Izu east coast. Between Toi and Odawara there were 4 climbs of various sizes, the biggest one at Manazuru, where we used prefectural road 740 high above the main road. The pace was relatively slow there as most of us were getting sleepy. Before Odawara we rejoined the main road and the course became mostly flat. 264 km from the start we stopped at a Denny’s restaurant for a meal and a turbo-nap. It was hard to believe we still had another 100 km to go.

Meanwhile the BRM421 300 km Fuji brevet by AJ NishiTokyo had started in Machida at 22:00. I was wondering if or where we would meet participants heading towards Odawara from Enoshima, for their clockwise loop around Mt Fuji. Indeed we came across the staff car parked by the side of the road, waiting for the fastest rider of that event to pass through and to take pictures. The staff members welcomed us with big cheers, took our pictures and we actually witnessed the first rider coming through soon after. As we rode east towards Enoshima we passed all the participants of BRM421 and shouted out encouragement towards them across the highway.

The nap at the restaurant seemed to have helped Mr O. and the flat route was better for Mr. D.’s knee. It became harder again for me to maintain the pace, but that was a good thing because it meant we could finish it as a team. We blazed down the west coast of Miura past Enoshima, Kamakura, Zushi and Hayama. Then we turned away from the coast towards Miura-Kaigan station for PC5, a 7-11. 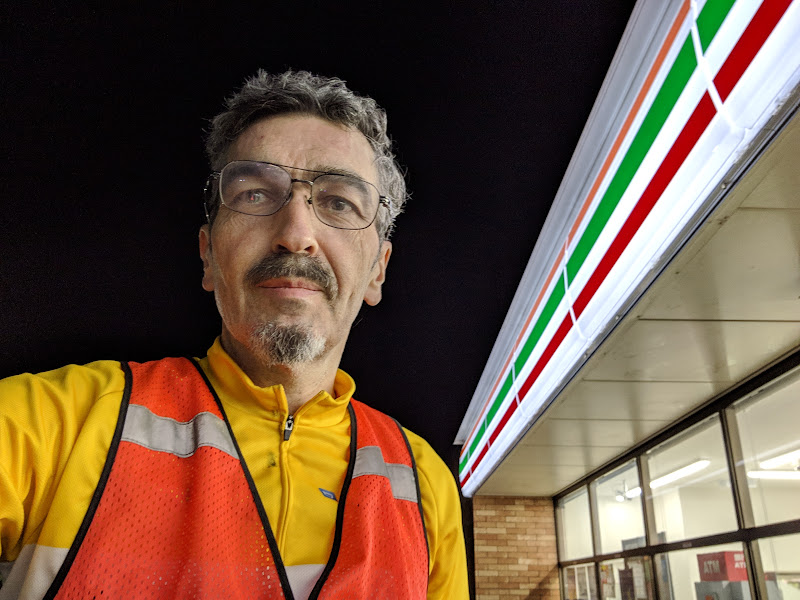 The first birds could already be heard in the night as the morning approached. A mere 8 km from PC5 we collected another receipt at PC6, a Familymart in Yokosuka, to document we didn’t take any shortcuts. The more important next destination was a Jonathan restaurant in Yokosuka at km 337 where we arrived before 04:00. This was our designated 22 hour spot. We would eat and rest here until 05:00, 2 hours before the ride closing time, before our last ride segment of at least 25 km. The designated minimum goal was the Familymart at Yamashita-koen in Yokohama, just south of Minato Mirai, which was 26 km, for a total distance of 362.4 km.

We had just over an hour at the Jonathan restaurant. After having some food we all took a nap, until awoken by the alarm clock set for 04:50. We paid individually at 05:00, took our receipts and set off for the goal. We had almost 2 hours left to cover 26 km. There were traffic lights but not that much traffic. In between traffic lights Mr O. pulled us again at 28-30 km/h. As we got closer and closer we had an ever increasing margin against bad luck, such as a last minute puncture that could have screwed everything up. When we got close to Yamashita-koen, Mrs N. suggested not stopping there to collect receipts to prove we covered the minimum distance but continuing on towards Tokyo since the spirit of the Flèche is to ride as far as possible in those 24 hours. So we continued on past Minato Mirai and on to Rt15 as the clock moved towards 07:00. We would only get credit for the shortest distance from the last PC (Jonathan) to the 24 hour point, so not all the distance we rode counted towards the result. We all had coffee at a conbini on Rt15, where the 24 hours expired.

After that we collected and sorted our receipts and filled in the PC times on the brevet cards. Then we got back on our bikes again and rode another 27 km to Hibiya-koen in Tokyo, now without any clock ticking but still not much slower. We handed in our brevet cards with receipts for checking at the reception desk. There were teams that had cycled here from Sendai, Niigata or Nagoya. I met several randonneurs I knew from other events. The chairman of Audax Japan was also there. All the teams were called up on stage one by one, to briefly introduce themselves, with the team’s route projected on a screen behind them. 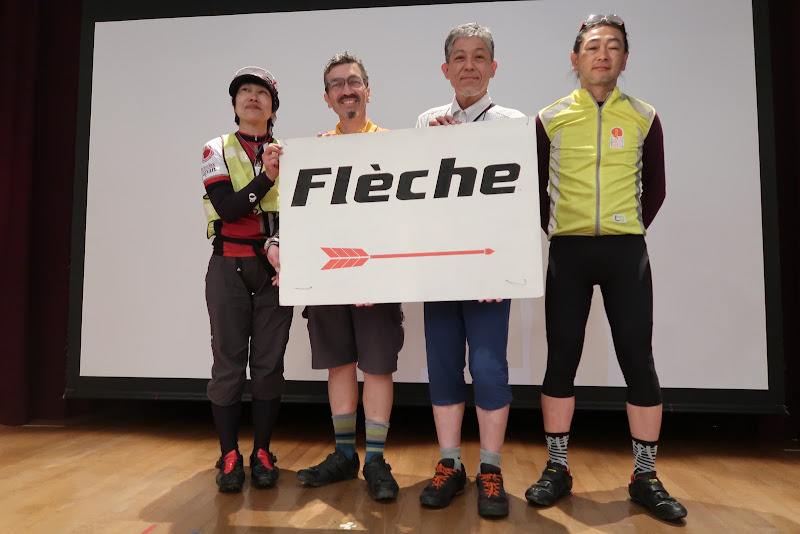 The ride home alone from the event seemed like the hardest part. All the adrenaline must have dissipated and the smallest climbs seemed painful. At home I went to bed and slept for 4 hours until dinner.

On Monday the legs were still complaining on the shallowest of grades. The next day they felt almost normal. The third day I felt fine again.