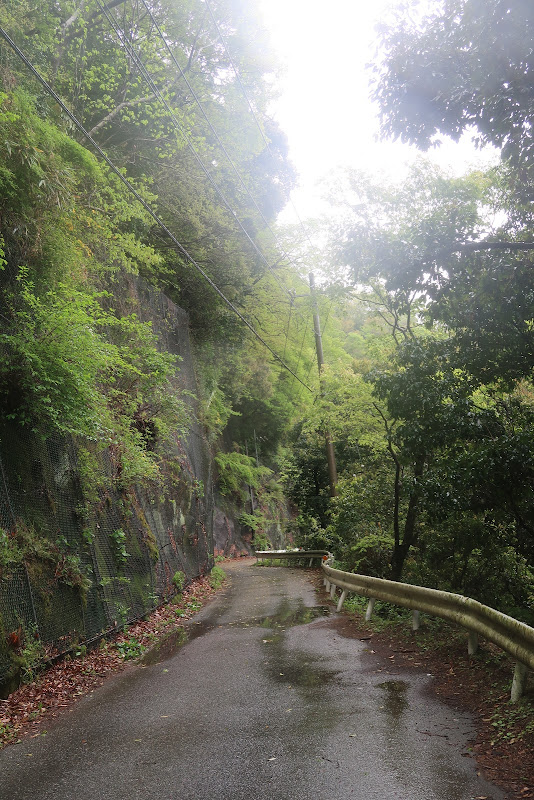 On Saturday/Sunday I cycled in the 300 km brevet around Mt Fuji organised by AJ NishiTokyo, like in the six previous years. Last year I set a personal best time of 18 hours 51 minutes, which is 1 hour 9 minutes under the 20 hour time limit. This year I was not so hopeful. As the day approached, the weather forecast had turned increasingly worse, finally predicting heavy rain and very strong winds on the course between midnight and about 10:00 on Sunday morning. As it turned out, that forecast was spot on!

I had done the 300 km Fuji brevet in the rain once before, in 2014 (see pictures here), but this time turned out far worse.

After getting a couple of hours of rest on Saturday afternoon, I cycled 28 km to Machida for the late night start (22:00). In 2014 I had taken the train there and it had already started raining on the way from Machida station to the event starting point. We then had the pre-ride briefing inside the Cherubim bike shop. This year the rain held off until almost 40 km into the brevet, on the way to Enoshima. 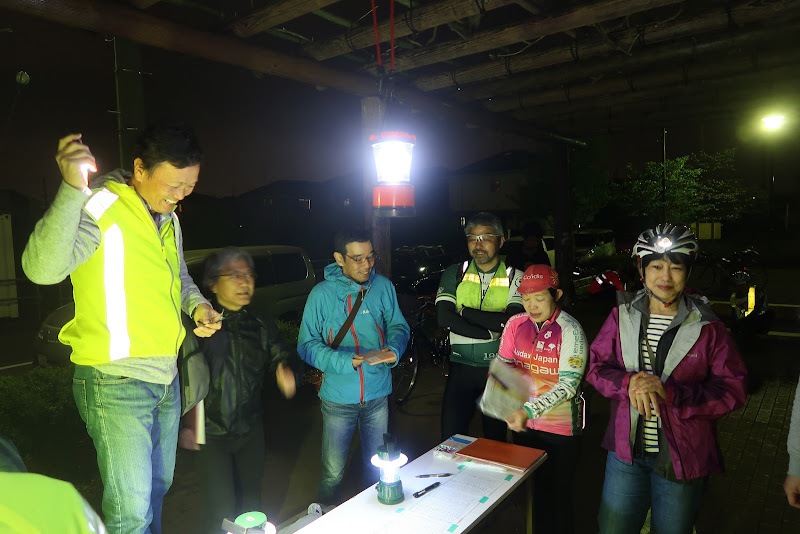 The crowd at the start was much smaller than usual. As it turned out, most signed-up would-be participants had chosen not to start (DNS) due to the weather conditions. I had cycled to the start in my rain wear, but took it off at a convenience store near the start because I was starting to sweat in it. Four years ago I had worn my Polaris rain jacket, which is even warmer. For fear of overheating I went with a lighter jacket this time.

At the briefing we were told about two of the bail-out options, should we chose to retire from the ride. Both Odawara and Gotemba have train stations, but by the time we were to arrive there, the last trains would have left. Nevertheless there would be places around the stations where we could take shelter from the weather until the first morning train.

After the bike inspection we set off. It was quite windy, but no rain yet. Up to Enoshima on the coast I rode more by myself than in a group. 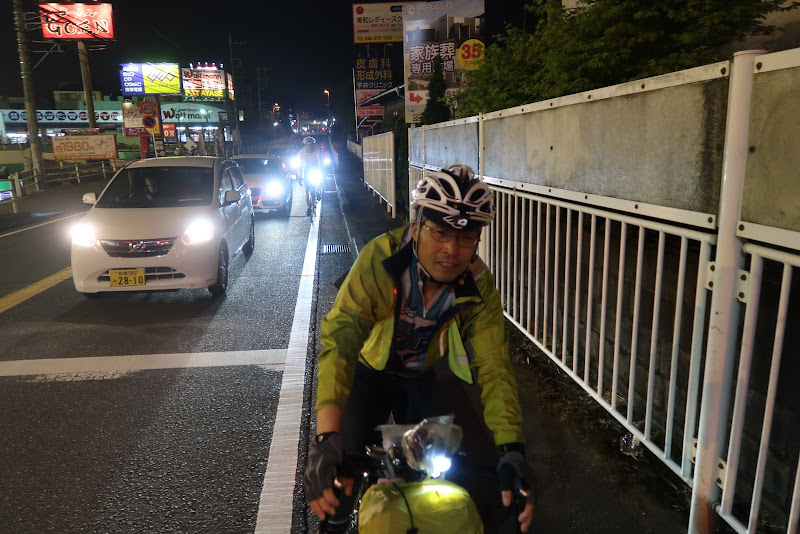 A couple of km before we reached the coast the first rain drops started falling and it steadily picked up. The first check point was a 7-Eleven store about 2 km east of Enoshima. I got there about 10 minutes to midnight.

When I came out of the store again the wind was fierce, whipping up sand off the beach which hit our faces and got on our teeth and into the eyes. The road was narrowed for some roadworks, so being pushed around while cars were passing wasn’t pleasant.

I was worried I’d be cycling into a headwind on the way to Odawara, but the wind pattern wasn’t very consistent. Whichever way it shifted though, it did slow us down. Also, there was little chance for riding with others. 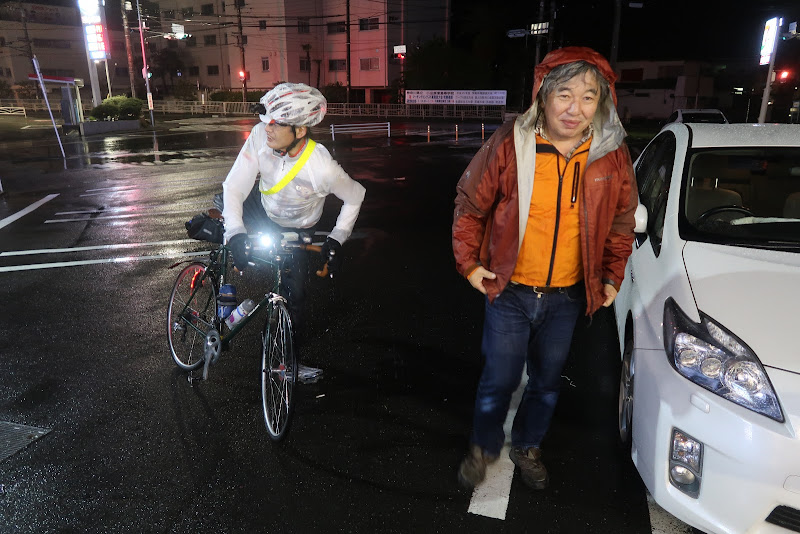 When I reached PC1 (point de controle) in Odawara, 72 km from the start and 100 km from home for me, it was 40 minutes later than last year. I knew I had to get well ahead of the 15 km/h average that dictates control closing times and the overall time limit while I was on the flat part of the course to make it to PC3 in time, after hours of climbing on the west side of Mt Fuji later in the day. 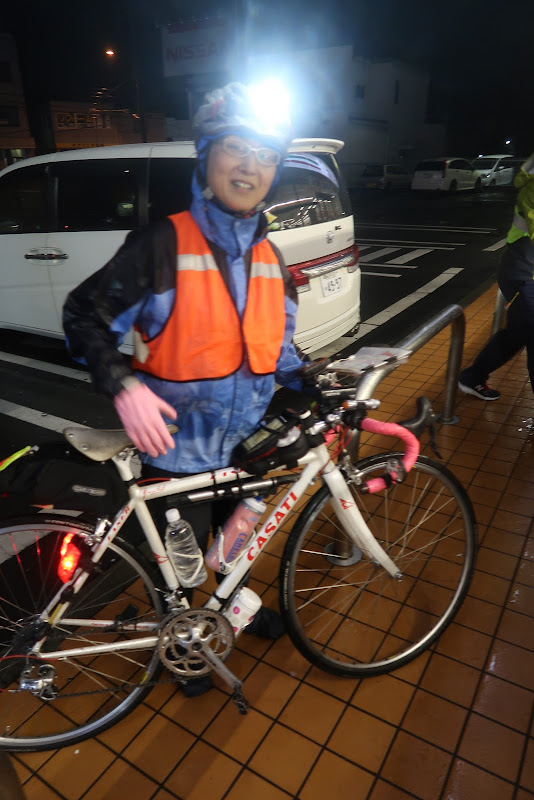 After Odawara I put on my do-it-yourself shoe covers, fashioned out of some plastic bags and tape, to keep my shoes and socks dry. Nevertheless, as I started climbing up to Gotemba, which sits on a saddle between the Fuji and Hakone volcanoes, gradually I was getting soaked more and more. My long sleeve jersey and my uniqlo long johns were absorbing cold rain that leaked through the rain gear. I think my Polaris rain jacket would have done a much better job at keeping me dry.

I cycled with another participant for the middle part of the climb, but then stopped at a convenience store for food and a toilet break. My eyes started getting irritated. Either the rain was washing sweat into my eyes, or it was sand stuck to my face since Enoshima that got washed into my eyes. Taking off my glasses and wiping my eyes with the back of my gloves or the fingers didn’t help much.

The climb leveled off near Gotemba but the wind and rain were still picking up in intensity. At this wind speed the rain drops felt like pin pricks to the skin. At dawn the atrocious weather and the near absence of people gave the scenery an almost apocalyptic feel. From here it was about 25 km downhill to Numazu, but with no prospect of the weather improving soon. This was perhaps the coldest part of the course due to of the combination of rain, early morning hours and wind chill while descending. I was already shivering with cold while alternating between closing my left and my right eye to avoid the burning feeling.

More importantly, the combination of eye trouble, hypothermia symptoms and the strong wind made me think about the risks of continuing. Even if I could coast down to Numazu, if I had to abandon the ride after that I would have to climb back up to Gotemba to get back home or ride the full course. That’s when I, remembering the advice at the pre-ride briefing, decided to find shelter from the storm in Gotemba and to head back to Odawara once things had improved.

Two or three other cyclists passed after I turned around and I shouted out to one of them that I was retiring. I found a McDonald’s on Google Maps that was open 24h and not too far away. I locked up my bike outside and walked in with my front bag. I bought myself some breakfast with coffee and sat down in a corner. I could take off my rain jacket to let my jersey dry. After eating I took a nap. When I woke up again it was still raining hard. Around 08:00 I called the organizers and let them know I was retiring from the event and would cycle home by myself. 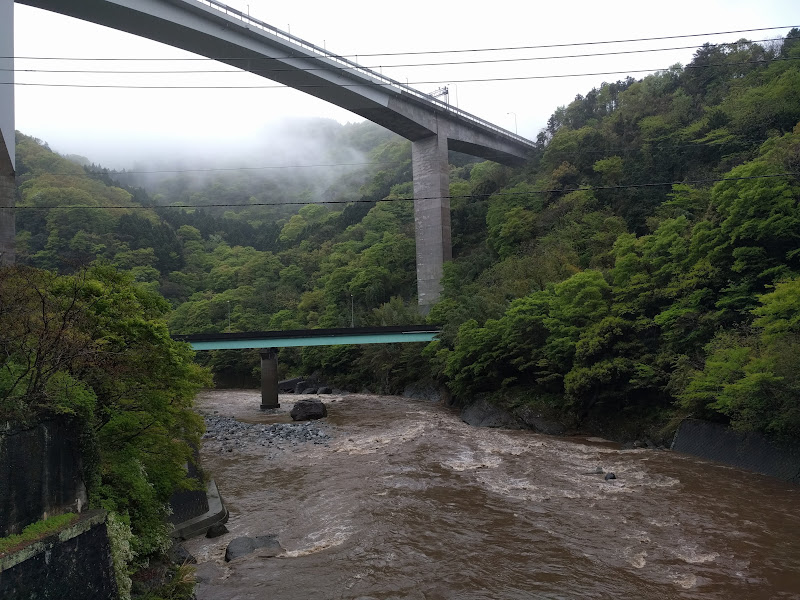 An hour later it looked like the rain had eased a bit. I cleared my table and headed outside again. It got warmer as I descended towards Odawara. I took pictures of the muddy, swollen rivers I passed.

After about another hour the rain stopped. The black and grey rain clouds against the sunlight at the coast were beautiful. 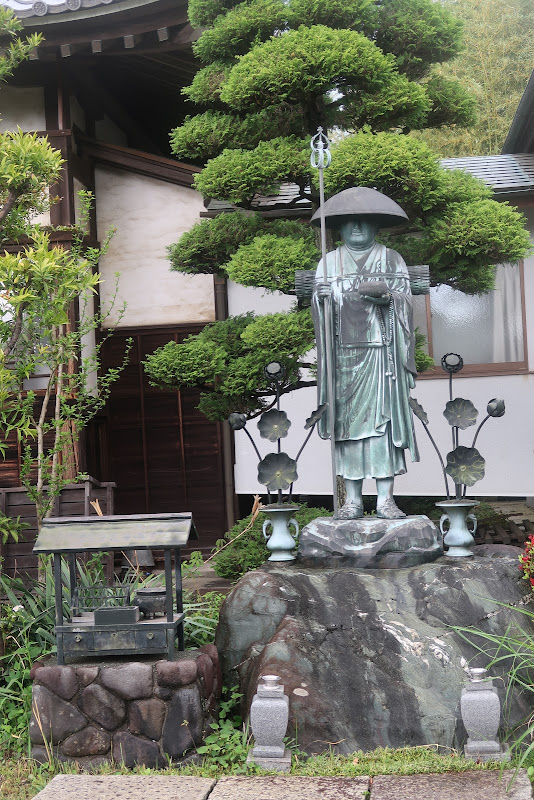 I joined the coastal road and headed east, past Enoshima to Kamakura. 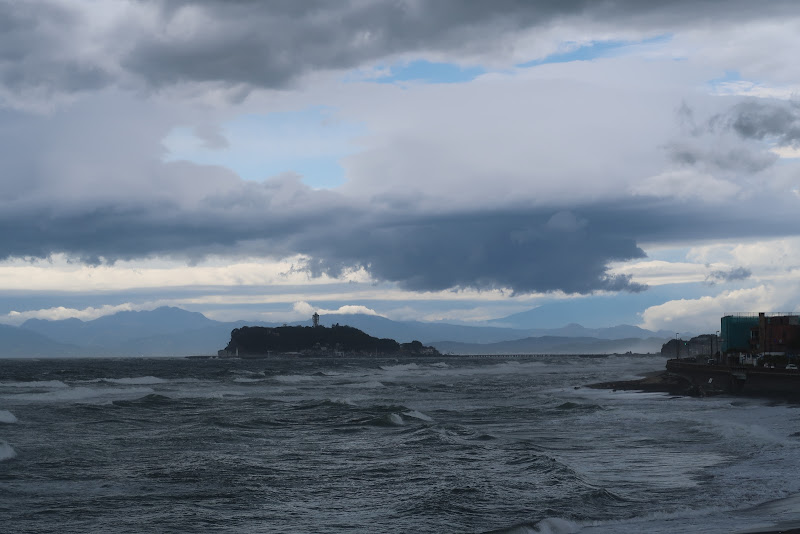 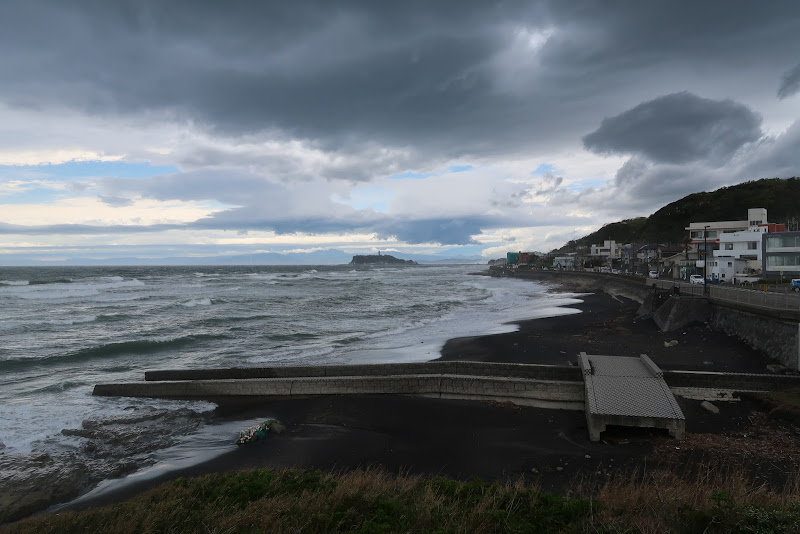 There I crossed the mountains over to the Tokyo bay side of Miura peninsula, then up to Yokohama and Kawasaki. I got home about 24 hours after I had set off, with 283 km of cycling. I hadn’t caught a single glimpse (let alone taken a picture) of Mt Fuji, but I was glad to be home safely. 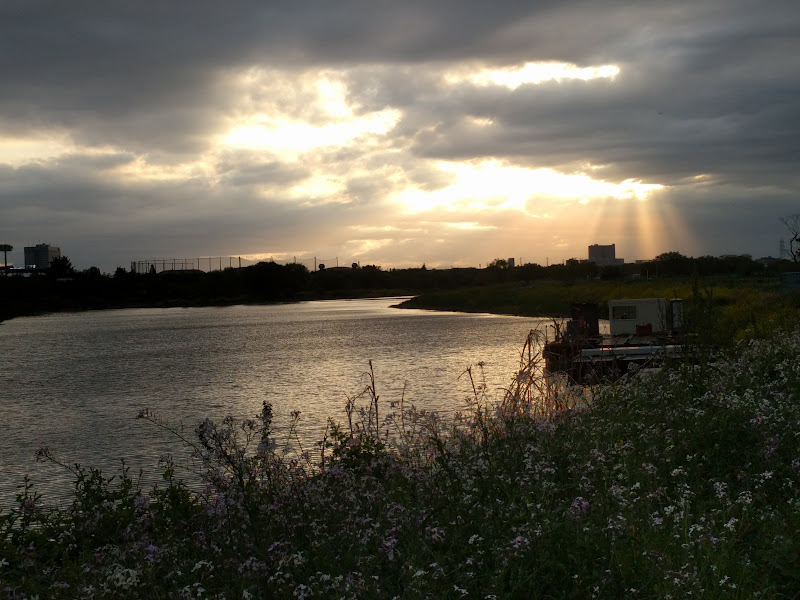 This definitely wasn’t the most fun bike ride I have done, but unlike other difficult rides I have done, I also didn’t get much of a feeling of achievement out of it — the first time in 7 years that I didn’t complete the Fuji loop. Perhaps this is one time I should have decided to stay home when I saw the consistently bad weather forecasts. It would have been the rational thing to do. But for me, long distance cycling is not that rational a thing to do. Much of it is a mental challenge as much as a physical one.

I do long rides because I love the views, but partly I also do long rides so I won’t be afraid of doing long rides. They can be intimidating. I can take on bigger challenges only because I have faced smaller challenges before. You overcome fear of being stranded in a strange place by venturing out there and facing the challenges. Sometimes I learn something about myself from the experiences. It can be a balancing act. I am never 100% committed to achieving my immediate goal, because there are more important objectives. To be able to continue doing long rides, I can’t get seriously injured or worse, so I need to decide what risks to take and when to cut my losses. 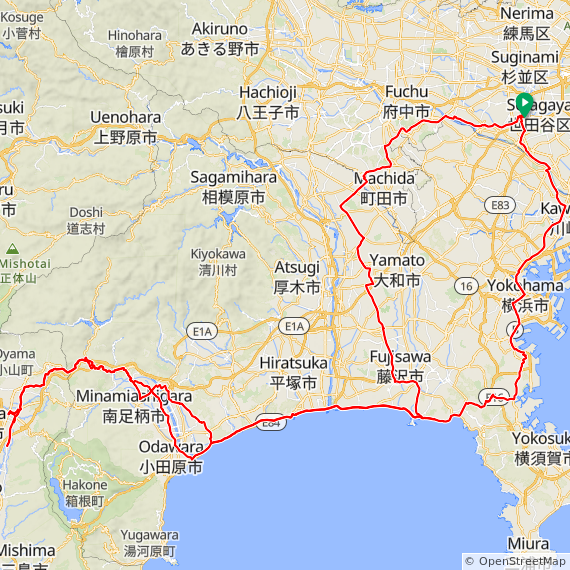