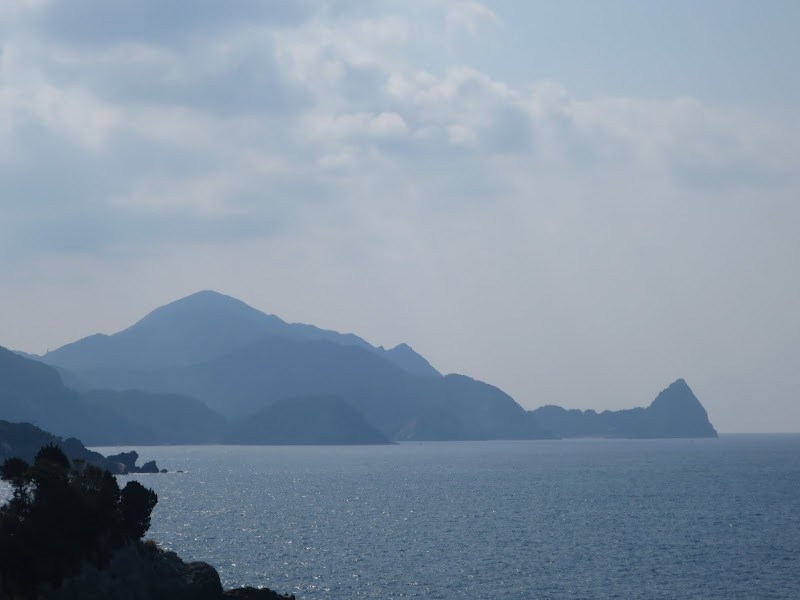 BRM227 NishiTokyo 200 km “Shiokatsuo” (BRM227西東京200kmしおかつお下賀茂コース) on 2016-02-27 was my first brevet of the new year and also the first on my new bicycle, the Elephant Bikes National Forest Explorer (Elephant NFE). 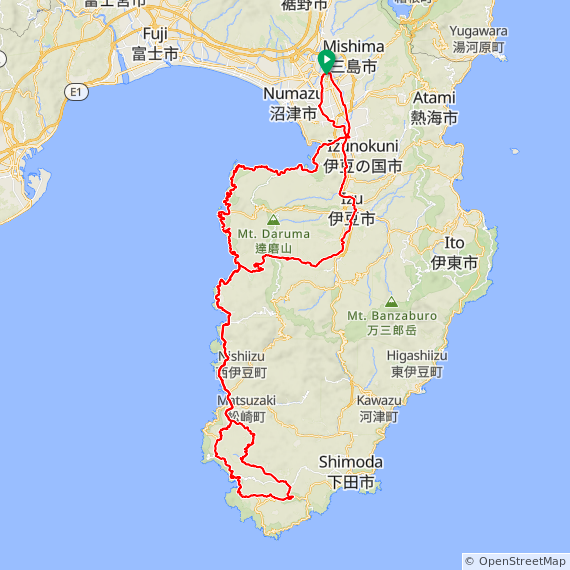 Having cycled relatively little in January and February I was worried about my fitness level. Also, since building up the NFE from a frame+fork set at the beginning of the month I hadn’t put much distance on it yet. Until the day before the ride I was still undecided whether to go back to my proven Bike Friday (BF), on which I have done about 35,000 km so far or go for it on the new bike.

I had done similar brevets on the west coast of Izu peninsula with AJ NishiTokyo in 2013 and 2014. For 2016, a choice of the either the 2013 (Shimogamo) or 2014 (Matsuzaki) route was offered. I went for the Shimogamo route, even though it’s supposed to have about 400 m more elevation gain. The Matsuzaki course (which I may try again next year) doesn’t reach down as far south and contains more out-and-back stretches instead of loops.

I had reserved a room at the Tokoyo Inn at Mishima station, across the street from the event start, so I wouldn’t have to drive two hours before the event.

On Friday I visited Tim at GS Astuto to have the spokes of the wheels he built for the NFE retensioned after 275 km of running in period. Tim helpfully also adjusted my disk brakes and tightened up my left crank which got rid of clicking noises while pedaling. That gave me the confidence to go for the NFE for the event. Thank you, Tim! 🙂 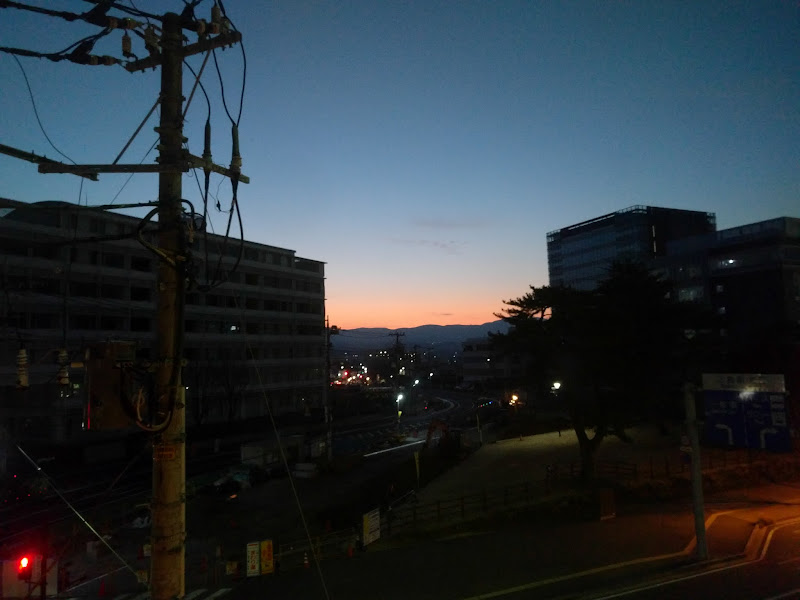 On Saturday morning I was up early, checking the view outside. The sky looked completely clear. I changed into my cycling gear, grabbed a cup of coffee and some bread rolls at the hotel breakfast buffet and headed over to the coin parking where I had left the NFE in the back of the Prius. 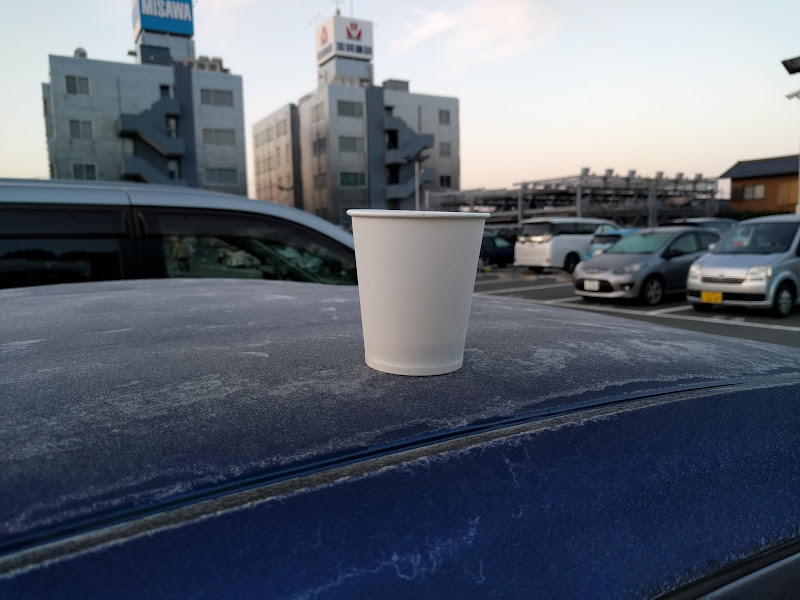 A few minutes later I rolled up to the start in front of Mishima station. The new bike got a lot of attention from fellow randonneurs. You don’t actually see a lot of “randonneur” bikes at Japanese randoneuring events and the combination of modern disc brakes with old school Honjo fenders and a Brooks saddle made the elephant an even rarer beast. 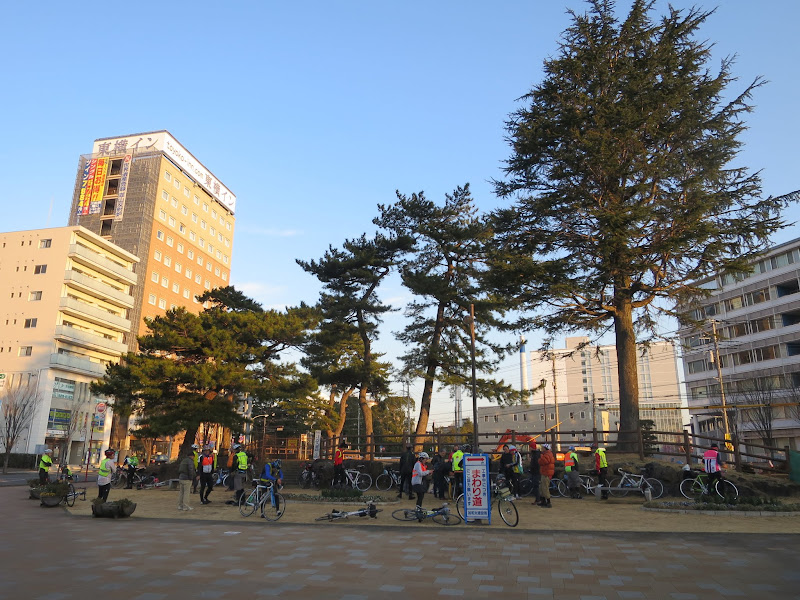 After the course briefing we pushed the bikes to the opposite end of the station for the safety check (lights, bell, reflective vest? Check!) and off we went. 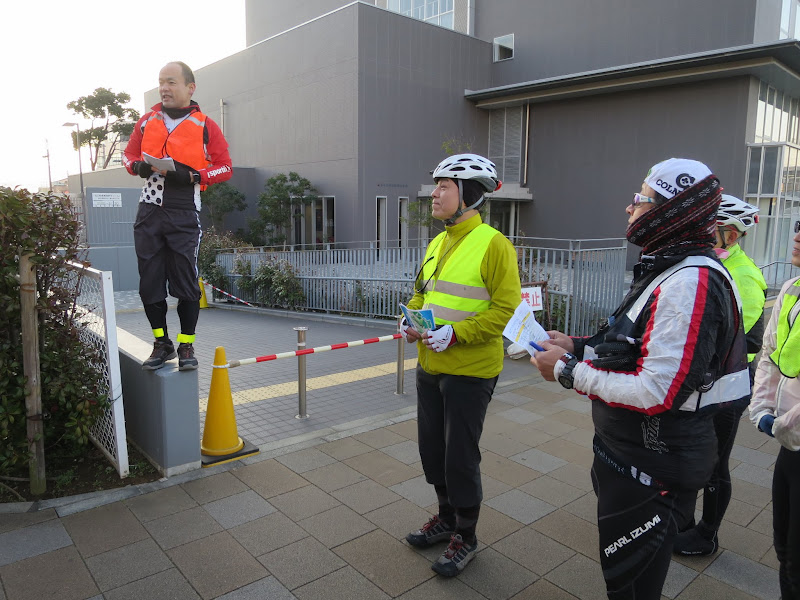 The initial speed was even more moderate than usual at brevet starts. A large group of us hung together on the mostly flat 30 km or so until the first (untimed) check point. I saw my first views of Mt Fuji but didn’t want to stop for pictures to stay with the group. 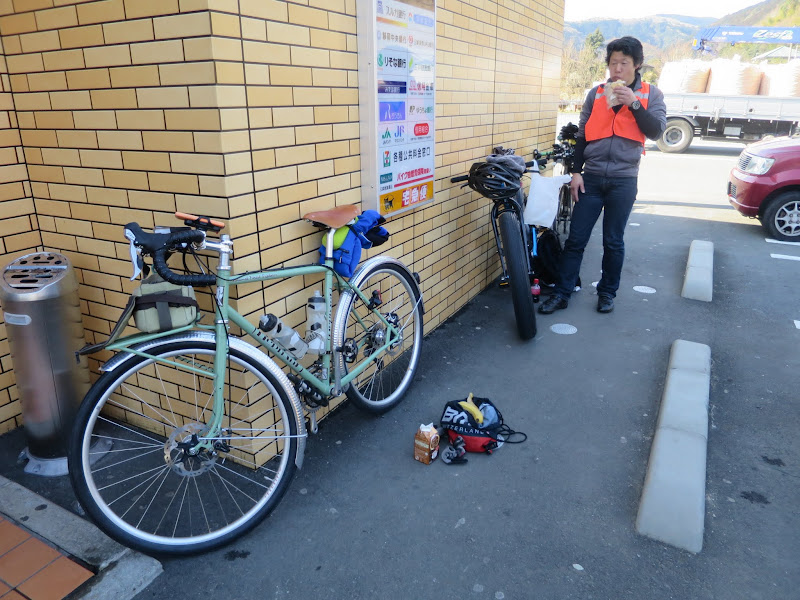 At the 7-Eleven I took off my winter jacket and the full fingered gloves. I did not need to put either back on for the rest of the ride, as I was always warm enough. I put the jacket into a plastic bag and strapped it to the back of the saddle. We were about 25 minutes ahead of minimum speed.

From here the road climbed for a couple of km to a mountain pass, followed by a long and fast descent to Toi onsen on the coast. I felt much more confident descending at high speed than I would have been on the Bike Friday. The wider Compass Babyshoe Pass EL tyres provide so much traction and absorb most road bumps effortlessly. 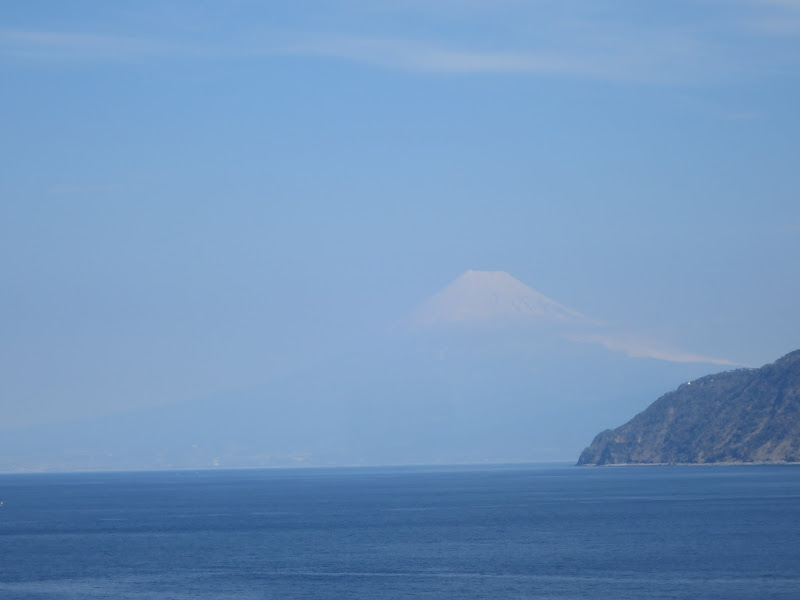 At the coast we got some Fuji views and I stopped for some pictures. On the way down to Matsuzaki the road passed through numerous tunnels and over many climbs and descents. The tunnels interrupted GPS reception and since I don’t have a wheel speed sensor installed yet, my displayed km count started falling further and further behind actual distance covered. I knew Strava would fill in the gaps on uploads, but I had to guess by how much to adjust the current number to estimate how far it was to the next control.

The area around Dogashima is particularly picturesque. 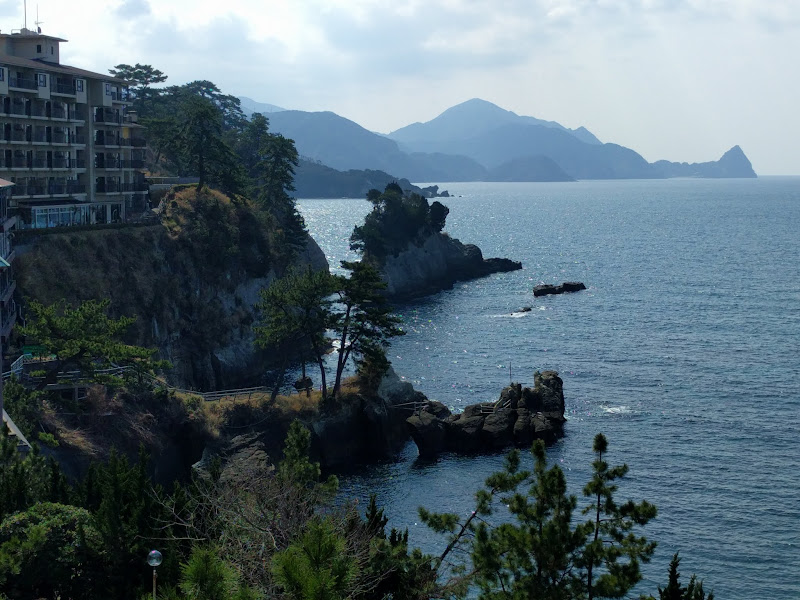 After Matsuzaki the course turned away from the coast to avoid the picturesque but narrow and busy coastal road around Iwachi onsen. We climbed up a very steep and narrow backroad, past some farmhouses and Shitake mushroom plantations in the woods. 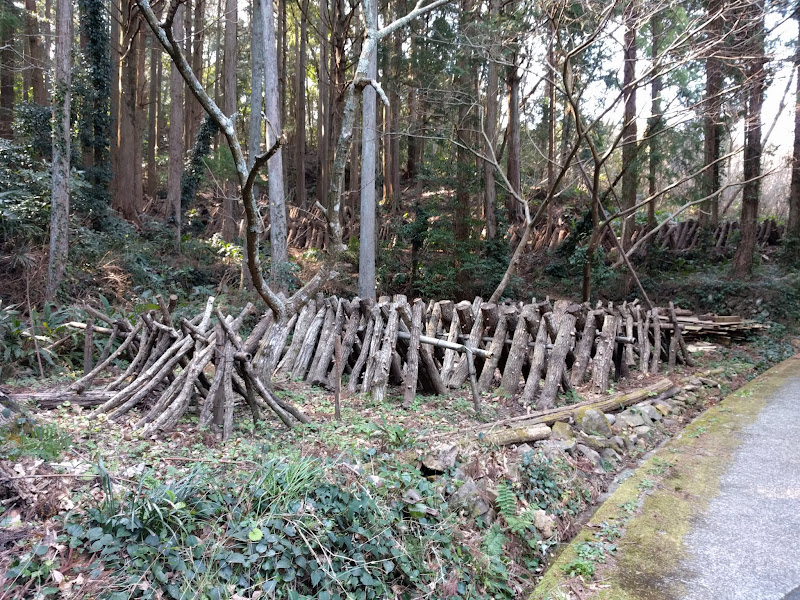 I rode alone most of the time, but came across the same fellow cyclists over and over as we all stopped at different times to get food, take pictures or for physiological breaks.

I was making good progress and felt increasingly confident about how I’d do in the brevet. By the time I got close to PC1 almost 100 km from the start and only about 15 km short of Shimoda on the southern tip of the peninsula, I was about 45 minutes ahead of minimum speed. 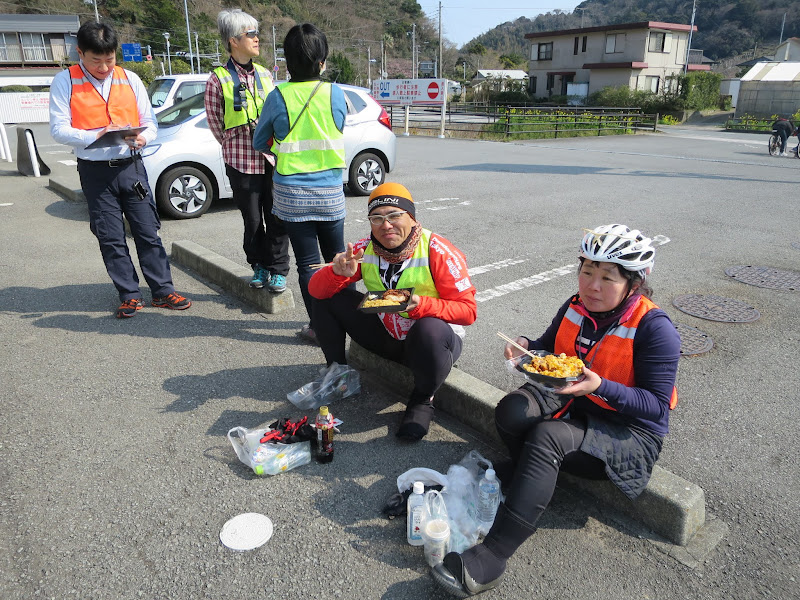 Still, I kept all stops as short as possible and didn’t even allow myself any hot coffee, which takes too long to sip. My choice of drink was mostly chocolate milk, along with my staple food of bananas. 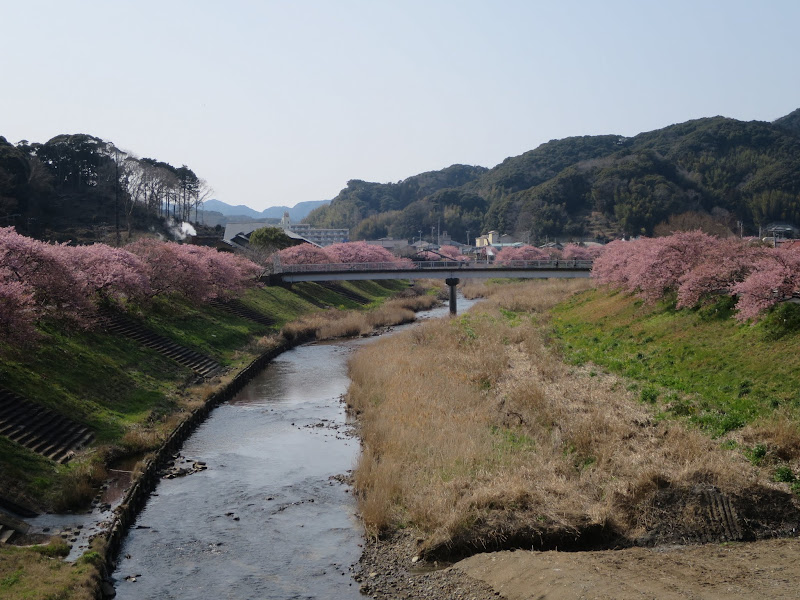 The loop at the southern end of the course had been reversed from the first time I rode the Shimogamo course, to reduce the need to cycle into a coastal headwind. 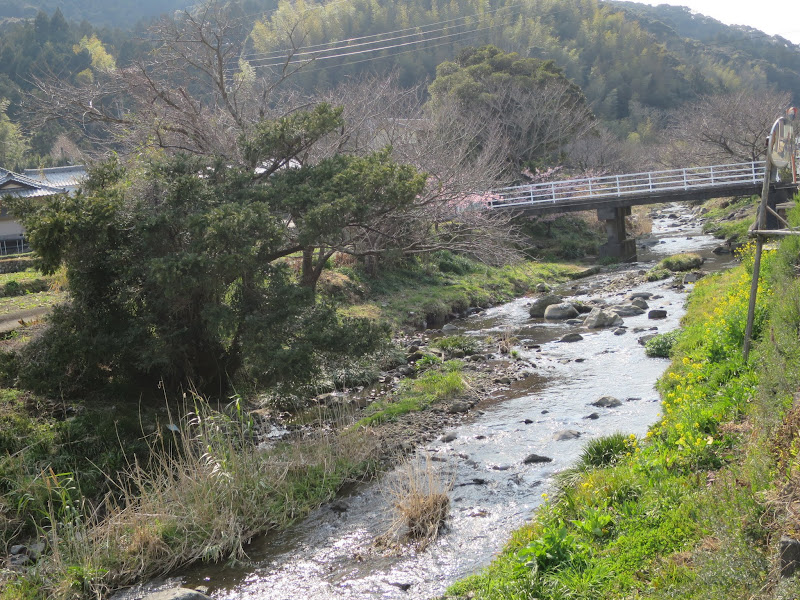 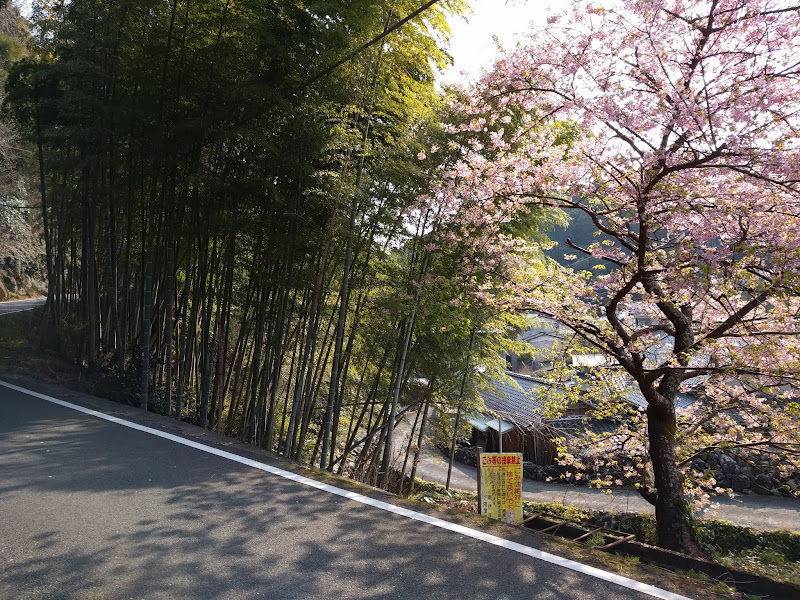 As I headed back up to Matsuzaki it was not as clear any more as in the morning. I ended up not seeing any more Fuji views in the afternoon, even in the northwestern corner of the peninsula. The sun was getting low as I passed through Dogashima again, then through Toi, where I stocked up on food at the last convenience stores before the sparsely populated NW corner. 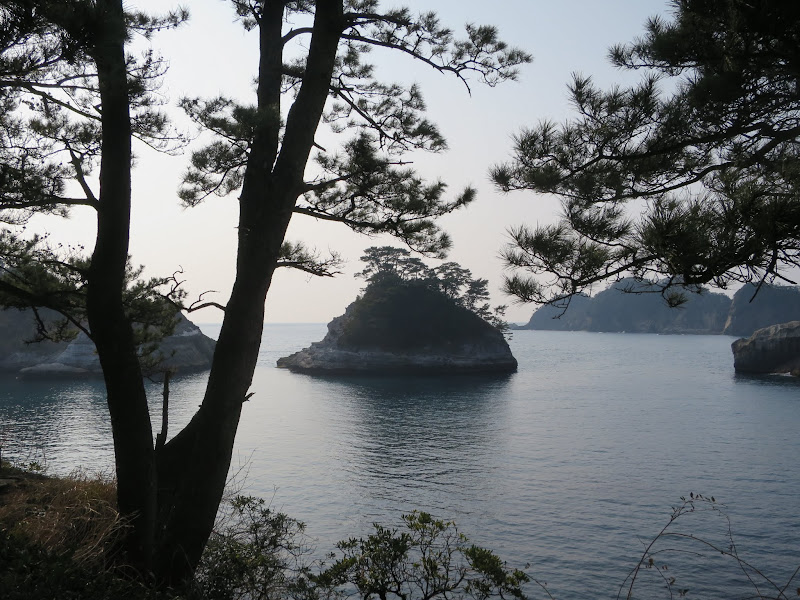 Compared to my earlier rides I was feeling a lot less fatigued, even though the NFE is no lighter than the Bike Friday. 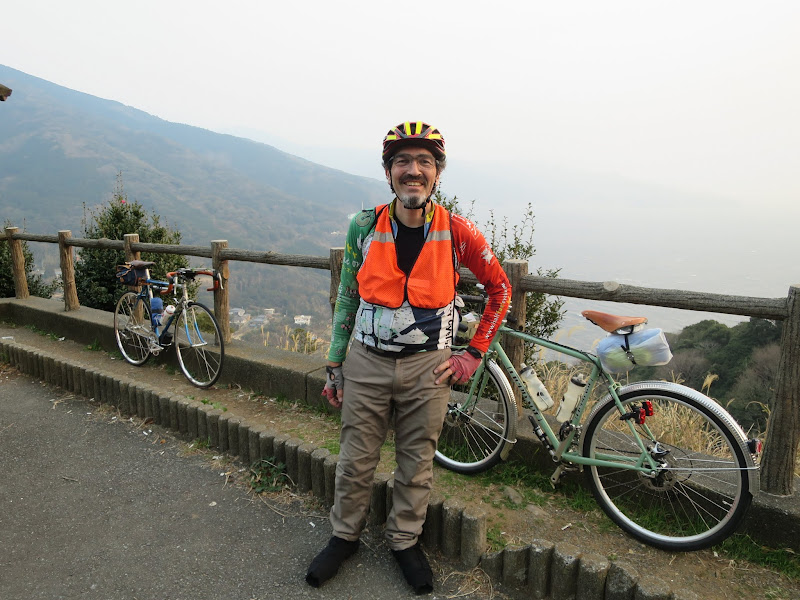 Much of the last 40 km before PC2 was very windy, with strong gusts gripping the bikes, but the NFE with its low trail fork is not very sensitive to that (same for the BF) and I felt safe at all times. The low trail fork also makes it easier to make quick corrections to avoid pot holes, sewer covers, etc. 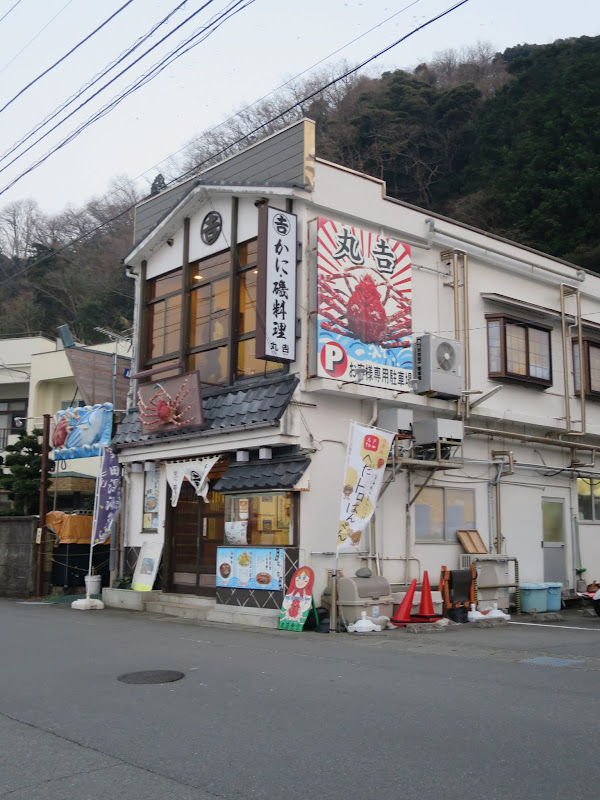 Darkness fell and we descended from the last big hill at the NW corner. I followed close behind another rider, with the Lumotec dynamo light flooding the road with light. We kept a pretty good pace for the next 15 km and rolled up to the Ministop at the edge of civilization at almost the same time. I was about 50 minutes ahead of cutoff time, with only 13 km to go. In a 200 km brevet you gain an extra 10 minutes of time after the last PC: The cut-off time for all PCs is based on their distance from the start divided by 15 km/h, but the overall limit is 13 1/2 hours, not 13 1/3 hours as it would be with a strict 15 km/h minimum speed. So basically I had 2 hours to cover the final 13 km — I could take it easy for the urban ride back to Mishima.

When I finally did buy a cup of coffee at the 7-Eleven near Mishima station that served as the goal, it was 20:00, exactly an hour from course closing time: My first NFE brevet was my fastest Izu brevet ever. And somehow I had still managed to take 101 photographs since the morning 🙂 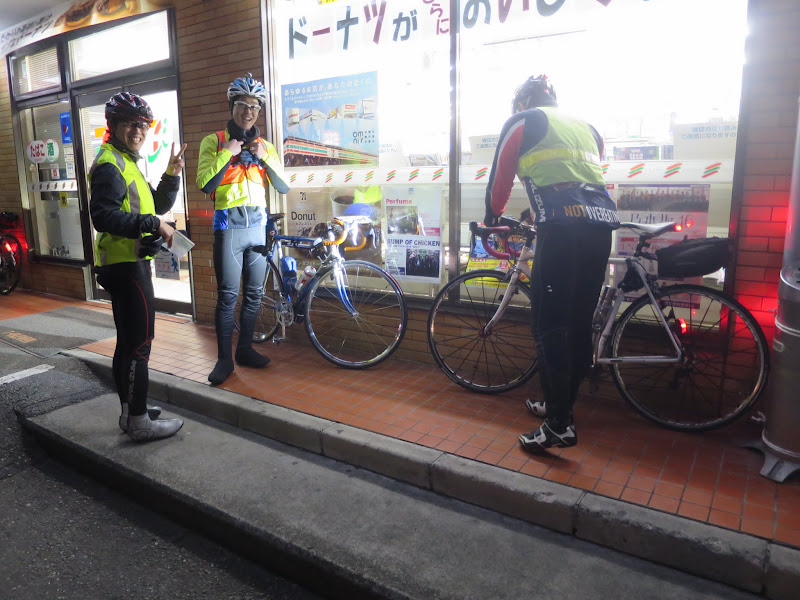 While I enjoyed my coffee, a few fellow riders rolled up to the conbini. After they had also bought food and drinks and kept the receipts, we cycled back to the Toyoko Inn together, 3 km from the goal, where the reception desk was for the receipt check to confirm we had properly completed the ride. 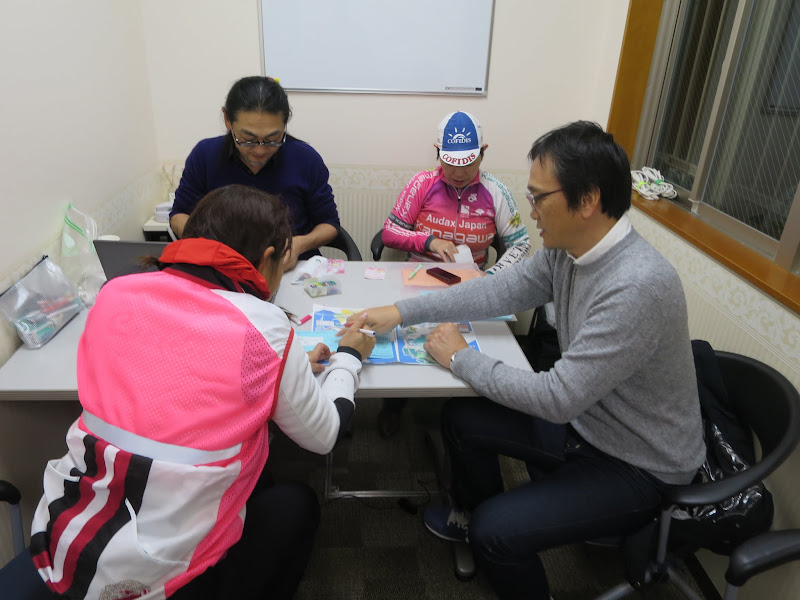 I really had a great day. I had started the ride still worried if this might be the first ever 200 km brevet that I might not finish under the time limit, but instead I improved my best time and felt great doing so. The cooler temperatures definitely helped, but so did the comfortable ride of the NFE.

I am looking forward to my next brevet, BRM326 NishiTokyo 300 km Mt Fuji, on the same course around Mt Fuji that had served as a my first introduction to randonneuring in May 2012. Meanwhile I still love my Bike Friday and enjoy every km I ride on it. For courses involving train trips it probably will still be my #1 choice, as it’s easier to pack into a small package and it is still my go-to bike for rides around town.