BRM519 was my third brevet ride with AJ NishiTokyo this year and my fifth brevet overall (including an unofficial shadow ride in January). It makes May the 9th month in a row for me with a Century ride (over 160 km / 100 miles).

I’d been wanting to ride this brevet again since I did it last year (my first brevet ever). I worried about family or business travel that might conflict, or about foul weather on the day, but none of that came to pass.

Like last year I was the only one attempting the brevet on a small wheeled bike, but while I heard a few skeptical comments last year, as people thought I was attempting something very difficult, the comments I got this year were overwhelmingly positive. I got many compliments on the Bike Friday, my folding road bike. 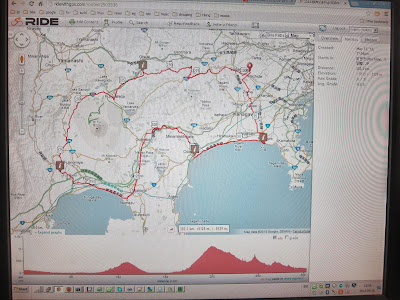 I left home at 19:20 on Saturday, got back around 20:30 on Sunday and slept all of 20 minutes in between. I rode 360 km (224 miles) altogether, since this time I didn’t pack my Bike Friday into the bicycle bag for a train ride to and from Machida (the starting point), but rode from Tokyo-Setagaya to the west side of Mt Fuji and back. That makes it the longest bike ride for me so far. 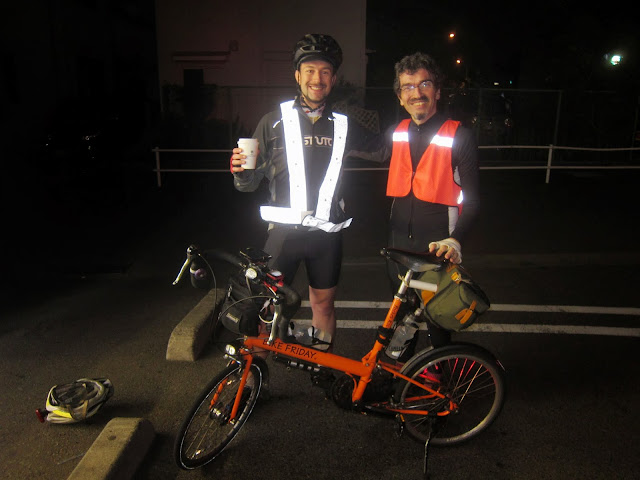 At the signup I was greeted by David and William, who I had met through my blog post about the Nichitsu ghost town ride last year. This was the 3rd brevet we rode together. The previous weekend they had completed a 100 km hike for charity. Kudos to them!

I’d been training for this event for a year and bought a Garmin 500 with heart rate monitor belt in January, but Sod’s law would have it that the battery of the belt ran out just before the event. I had done a last training ride a week earlier and everything had worked fine, but when I rode out to the start on Saturday night, the Garmin did not pick up data from the HR belt. I suspected the HR sensor battery (I had used the belt for 2500 km over 4 months). A CR2032 button cell was 250 yen ($2.50) at the next convenience store, but I also needed a tiny screw driver (the size used for eye glasses and watches) to change it. A mechanic at the Cherubim bike shop (where the brevet signup takes place) helped me out. Thank you!

With the new battery the Garmin started displaying numbers though it also warned me about the presence of multiple heart rate sensors, hardly surprising in the reception area of a brevet!

Another problem was that near the 298 km mark, the Garmin lost satellite reception, with no tunnel or other obstacle to explain it. Also, the route as plotted by Strava has me swerve out into the Pacific once. Though my Garmin charger cable worked beautifully to extend its battery life beyond 16 hours, I’d say the jury is still out on whether the Garmin 500 will cope with brevets beyond 200 km. 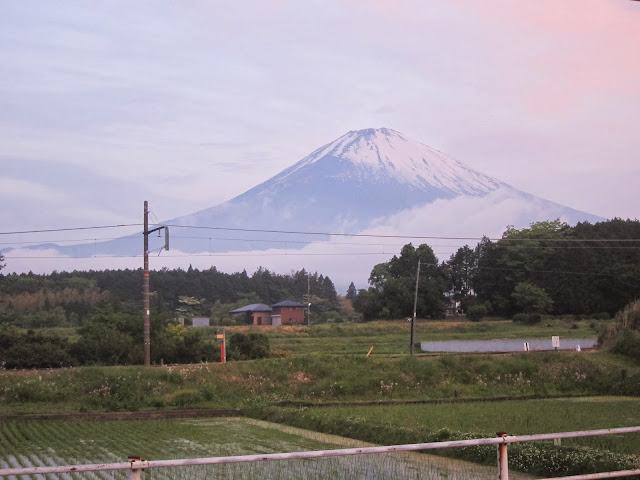 Too fast and too slow

Why do I use a Garmin if I ignore its data? The idea with HR data is to always operate at your maximum sustainable rate for the duration of the event. I didn’t do that, far from it.

On brevets you need to maintain a minimum average speed of 15 km/h (by elapsed time, including all breaks) overall for the course and up to each check point (PC). Since most climbs are such that my speed will drop below 15 km/h and I can’t make up the lost time on faster descents because they are too short for that, I need to build up a time buffer on flat sections. The first third or so of the course was mostly flat, so we could go fast. I also worked hard for the first 50 km of the 200 km West Izu and Kintaro brevets, but foolishly pushed even harder during the first 75 km of the 300 km, when I should have slightly dropped my speed to allow for the longer course. On top of that I felt the effects of riding through the night without sleep. 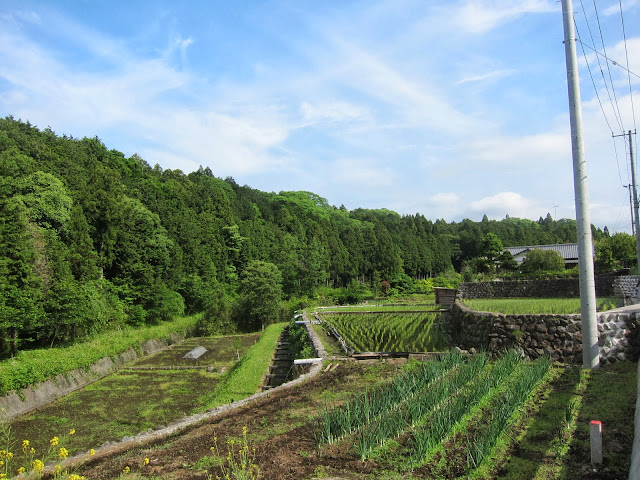 As a result, the 4 hour climb from sea level at Fujikawa to 1,100 m above Lake Motosu was really slow. Most of the time my heart rate wouldn’t move much beyond 120, when it had been in the high 150s/low 160s on the flat sections. This is where I lost a lot of time. 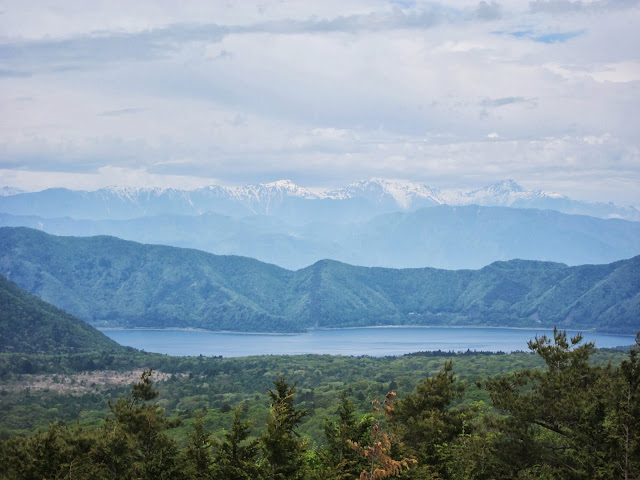 I only recovered via the long descent from the pass to Fujiyoshida and then down to Tsuru. My banana-raisin-outmeal energy bars also helped. I think they perked me up more than any bread or onigiri (rice balls wrapped in sea weed) I bought in the convenience store.

Before the Tsuru check point I had all but written off my chances of completing within the time limit. I had to take a second brief nap by the road side at R139 before Fujiyoshida. The high speed descent from Fujiyoshida to Tsuru is always fun and by the time I got there, my time buffer didn’t look great, but workable. 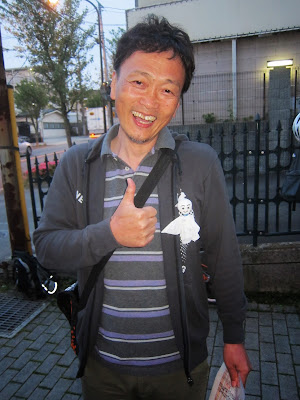 The Fuji brevet two years ago (2011) got rained out. Though the real hard core riders battled it out in their rain gear, from the pictures it didn’t look like a pleasant experience. The weather report had forecast rain for Sunday right up until the last day, when the outlook changed to something more positive and it worked out OK. At the pre-ride briefing one of the organisers showed us the “teru teru bozu” (anti-rain charm usually made by kids) to ward off rain. Of course I don’t believe in this stuff, but it only started drizzling during the last 30 km before the goal, and only on and off. It was so little, I didn’t even put my smartphone away until I had arrived.

I had discussed my concerns about the weather with my friend Jose and he advised to make sure I’d be warm enough if it rained. I had considered wearing either my GS Astuto bib shorts on top of a long base layer or my dhb winter bib tights and finally opted for the latter. As it happened, the first choice would have been better. I only wore my windbreaker between 04:00 and 06:00 for the early morning descent from Gotemba to the coast. The weather and what to wear is always a guessing game on long rides, especially if you want to minimize how much you carry.

Just like after last year’s 300 km brevet, the AJ NishiTokyo organizers asked me if I was going to give the 400 km brevet in June a try. Also, from next year they will have a 600 km event, for which they will do a trial run in September. My main concern about the longer rides is the effects of lack of sleep. I did much better on that front this year. Short naps work well for me and I probably should have tried one sooner this time. Riding to the brevet start was a decision I only made hours earlier and I still brought along the rinko bag, in case I was too tired after the ride to consider cycling home, but as it happened, I never used it (I could leave it with the staff during the ride). 400 km over 27 hours isn’t that much more than the 360 km over 25 hours that I rode for this event. So I would say, I am definitely up for a 400 km brevet in the future. 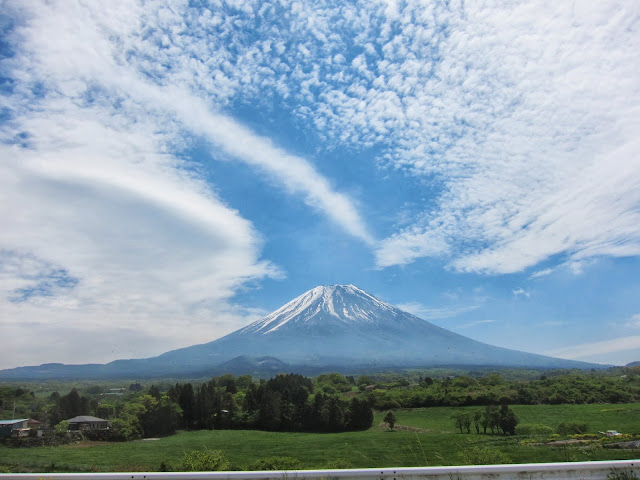