Yesterday my geiger counter arrived here in Japan. It is a Terra-P dosimeter made by Ecotest, a company based in L’viv/Ukraine, about 300 km west of Chernobyl. 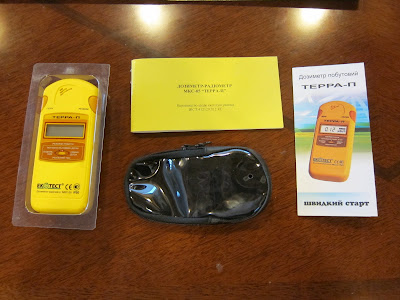 I bought the device on eBay from a supplier in Australia for US$399 including shipping. It arrived within 9 days and seems to work well. Although the buttons on my Terra-P are labelled in Cyrillic (either Russian or Ukrainian) and so is the manual, English manuals for it are easy to find online, so that’s not really a problem.

The Terra-P is a consumer grade dosimeter, so it’s not quite as versatile or as precise as professional devices costing $1000 or more, but it covers the basics very well. Its power source are two AAA-batteries, accessible via a lid at the back of the unit, which are easy to replace. It measures gamma rays and is suitable for checking for caesium contamination.

The user interface consists of an LCD, two buttons and speaker. One push of the right hand button (“режим” = mode) switches the dosimeter on and puts it into the measuring mode. The display switches to a microsievert per hour (µSv/h) readout. For the first 70 seconds the resulting number blinks, as it averages the dose over that period and the number gradually becomes more meaningful. After the initial sampling period, the number displayed will always be the average of the last 70 seconds, so you can move it from location to location and will get a decent result provided you wait for about a minute.

After several minutes the device enters power save mode, in which it continues counting radioactive decays, but the LCD is off and less power is used. To turn it off completely when it’s active, push the mode button once more and then push and hold it for four seconds, until the LCD blanks.

The Terra-P also has a user-settable alarm threshold (default: 0.30 µSv/h) and a clock mode. The built-in speaker usually makes one click for every gamma photon detected and sounds an alarm if the radiation exceeds the alarm threshold.

Checking my home after unpacking the device, I found the radiation level was a little higher than the 0.055 µSv/h reported for Tokyo by the local government, but still somewhat lower than the 0.10 µSv/h in my home town in Germany. On the other hand, I was relieved to see the wooden deck outside our living room was no more radioactive than inside the house. As expected, the gutters at the edge of the road, where rain water drains into the sewers, was more radioactive, with about 0.20 µSv/h, which is still far from alarming.