As I explained here almost two years ago, I have had the front brake of my Bike Friday replaced with a disk brake, an upgrade that involved installing a new fork with disk brake tabs. Now I’m having the same upgrade done one the rear: 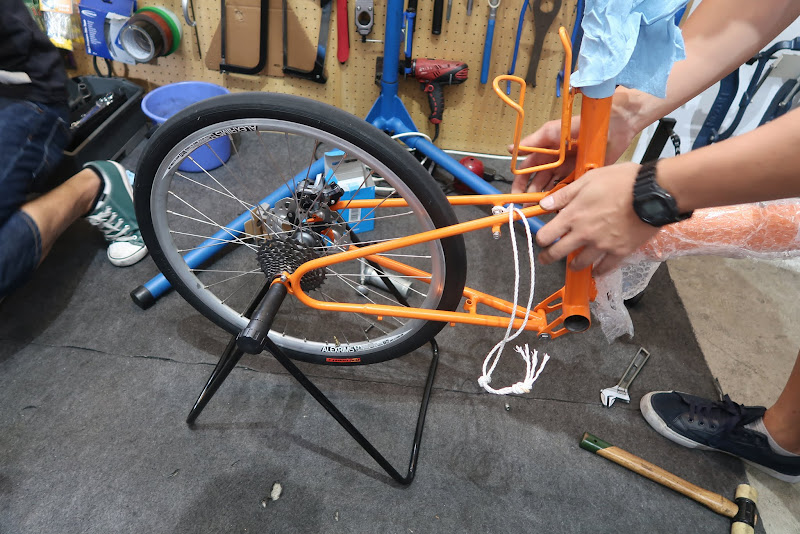 I needed to replace the rear wheel anyway because after 37,000 km its rim was worn out. The aluminium of the brake surfaces was already worn past the wear markers. I decided, this was a good time to switch not only the rim but the brake too. With disc brakes, a well built rim will basically last forever. The brake wear will be on the rotor, but that is a cheaper part that can be replaced without the need for a full wheel rebuild. But more importantly, disc brakes are much more effective in the rain, where they are more predictable. I was reminded of that fact again when I descended a winding 20 km from Mt Norikura in the rain last month.

Originally I thought I could get IS disc tabs at the rear by simply swapping the rear triangle, which is a separate hinged part of the folding bike frame, but as it turns out Bike Friday needs to build the main tube and its hinge together with the rear triangle to ensure they will be properly aligned.

I went ahead and placed an order. A couple of weeks later the new main tube and rear triangle arrived. Tokyo Bike Friday dealer ehicle will be swapping all other parts from the existing bike to the new hinged section that has the disc tabs. 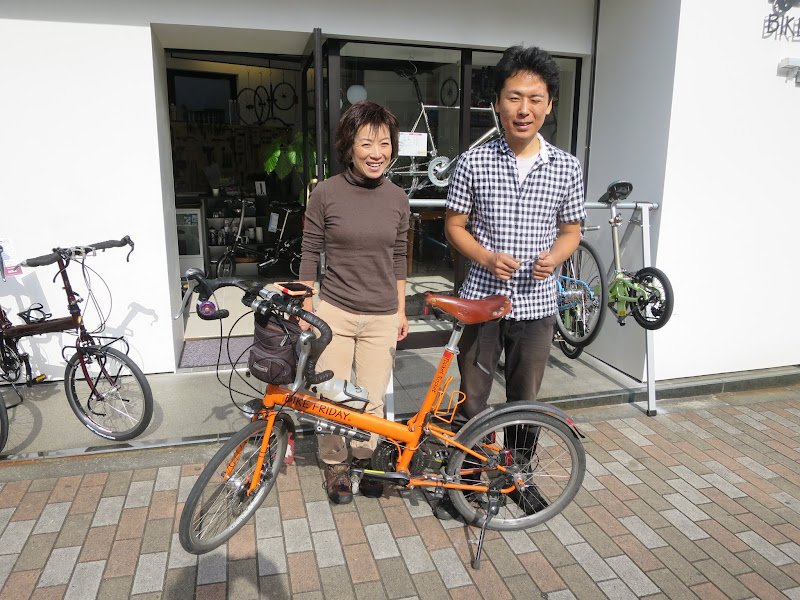 I bought a second Shimano BR-CX77 disc brake calliper. I still had a 140 mm centerlock rotor that I had bought two years ago as well as the matching IS adapter. The smaller rotor should be sufficient at the rear, especially with the smaller 20″ wheels. Heat dissipation should be less of a problem for a rear brake, which normally doesn’t have to work as hard as a front brake. I never had any heat problems with the 160 mm rotor at the front.

GS Astuto, my favourite wheel builder, built me a new rear wheel based on the Shimano Deore FH-M615 rear hub and an AlexRims DA22 rim (same as originally came with the bike). The disc brake wheel uses an O.L.D. (Over Locknut Dimension) of 135 mm, but the existing rim brake rear triangle uses 130 mm. Therefore installing the new wheel in the existing frame before the Norikura ride required some effort, but it worked OK. With the new rear triangle that issue will go away.

Once the conversion will be complete, I’ll actually have a spare main tube and rear triangle, a spare fork, two spare rim brakes and two spare hubs. The only frame parts missing to a complete non-disc brake frame will be the steerer and the folding seat tube 🙂 Nevertheless, doing it this way will have been worth it.

Instead of buying a new bicycle, I could first try out at the front what difference a disc brake would make, making only the minimal investment. I never had to send my bike back to the US for a few weeks for an upgrade or pay shipping costs either way. I only lost the use of the bike for a short period for each of the upgrade steps.

I’m looking forward to riding my upgraded bike this weekend, when the work will be complete! 🙂