It’s been almost 8 months since I started riding my Elephant Bikes National Forest Explorer (NFE). See the original build report here. Since then I have made several significant changes. Here is my bike as I was taking a box full of bike parts to GS Astuto, my local bike shop, to do the upgrade:

In May I switched from Compass Babyshoe Pass EL tyres with Schwalbe tubes to regular Compass Babyshoe Pass (non-EL) set up tubeless. In November I switched back to the original setup. Basically, it wasn’t worth the hassle. The front tyre started leaking through its side walls and no amount of sealant added would stop the leakage. The valves got pretty badly clogged by sealant foam injected through the valve. And finally I found that when switching back to the BSP EL tyres remounting them was trivially easy, quite unlike my experience when I had the first puncture, probably because I had since learnt how to properly mount a tyre on tubeless ready rims (hint: push the beads towards the centre channel of the rim to create enough slack).

The second change was to get rid of the Honjo Turtle 58 mudguards and replacing them with SKS plastic mudguards. The Honjo mudguards were beautiful, made from hammered aluminium. They gave the bike a classic look that drew many admiring glances. Trouble is, they were too tight. Even though they were advertised for 650B tyres as wide as 42 mm, I would not recommend them for anything beyond 38 mm. If either the mudguard or the wheel was not exactly centered I would sometimes get wheel rub, which really scared me: I do not want the mudguard to wear through the tyre sidewall.

I bought some SKS Bluemels (SKS-K-BM65-26-21-235) for 5700 yen instead. These 65 mm wide mudguards are designed for 26″ MTB wheels with tyre withs of 2.1-2.35 inches, but they work great for 650B. There’s plenty of clearance with 42 mm tyres and I may even get away with 47 m if wanted to go that way. The only difficult part of the installation was trimming the fairly beefy steel stays to the appropriate length. 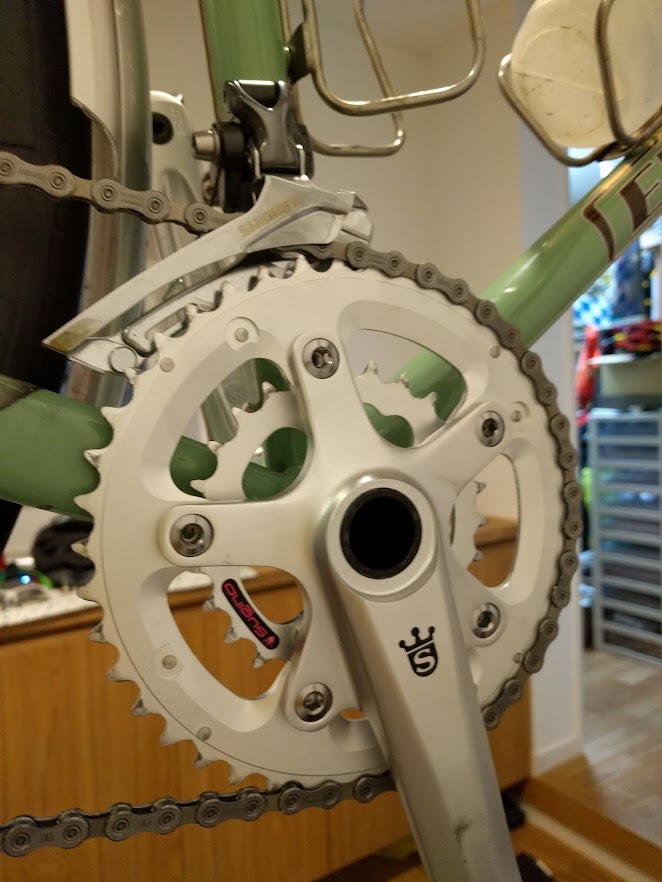 The third change was the biggest: I replaced the crank set, chain, cassette, derailleurs, shifters and brakes. I had been unhappy with the shift quality on my TD-2 touring triple, which was nothing like what I was used to from my Shimano 5703 triple. I ended up with dropped chains, chains that slide between the middle and the inner ring, upshifts and downshifts that overshoot, upshifts that require immediate counter-trimming, etc. I don’t know if the culprit were the chain rings or if it was the front derailleur, but I finally decided to replace the triple with a Sugino “Compact Plus” small double. I could have stayed with a 10 speed setup, but I wasn’t so happy with my TRP Spyre mechanical disc brakes either. If I switched to 11 speed I had the option of installing Shimano hydraulic disc brakes. So that’s what I ended up doing. 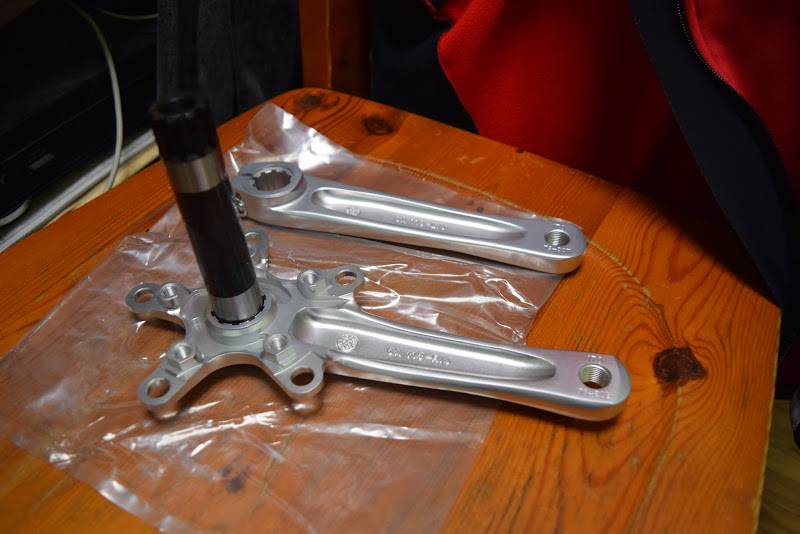 The new crank set is a Sugino OX601D. It is very similar to its more upmarket siblings, the OX801D and OX901D, which basically work exactly the same, but look more refined and come with different chain ring options. It’s a two piece crank (the old triple was a square taper three piece design), much like modern Shimano cranks. With both a 110 mm and 74 mm bolt circle, it can fit an outer of 40-50T and an inner of 24-36T. Inner rings of 24T-32T are 74 mm BCD (Sugino bolt set B) while 34-36 share the 110 mm BCD with the outer ring (Sugino bolt set A). The crank set offers a narrow Q-factor of 145 mm and a standard double chainline of 43.5 mm. I am using a Sugino PE110S-42T as my outer and a Sugino 74J-26T as my inner. Combined with a rear cassette of 11-32 I get gearing all the way from 21 to 100 gear inches. That means climbing as slow as 6 km/h at 60 rpm in the lowest gear or descending as fast as 47 km/h at 100 rpm and all without huge cadence jumps on rear shifts.

I went for ST-RS685 shifters, which are Ultegra grade. The 105-level ST-RS505 would have worked too. For the rear derailleur I went with the medium cage Ultegra RD-6800 GS — 105 RD-5800 GS would have been fine too. The new front derailleur is a FD-CX70, Shimano’s 10 speed Ultegra grade top-pull cyclocross derailleur. Shimano does not yet offer a top-pull derailleur for 11 speed road groups, but the 10 speed part works fine. There’s supposed to be a difference in cable pull, but it doesn’t really matter.

The new shifters and cables shift lighter than the previous Ultegra 6700 ones. The front shift is just as trouble free as on my Shimano 105 triple on my Bike Friday. Since the distance in gear ratios on the double front rings is wider than with the triple, I need to countershift three clicks instead of one on a front shift, but that’s easy.

I love the new disc brakes. The BR-RS785 calipers offer very light action with great modulation and plenty of bite when you mean business. On top of that they are self-adjusting. I basically won’t have to touch them until the pads wear out.