The Japanese government has released updated radiation maps for Eastern Japan from its helicopter survey. The maps now cover prefectures as far west as Gifu and as far north as Iwate and Akita. Previously there was map data only for Tokohoku (excluding Aomori) and the Kanto area. The PDF can be downloaded here.

The previous set of maps documented caesium contamination and background radiation levels in Fukushima, Tochigi, Miyagi, Ibaraki, Chiba, Saitama, Tokyo and Kanagawa. The latest set adds maps for Iwate, Shizuoka, Nagano, Yamanashi, Gifu and Toyama. Akita, Yamagata and Niigata have also been surveyed and are shown on the overview map. 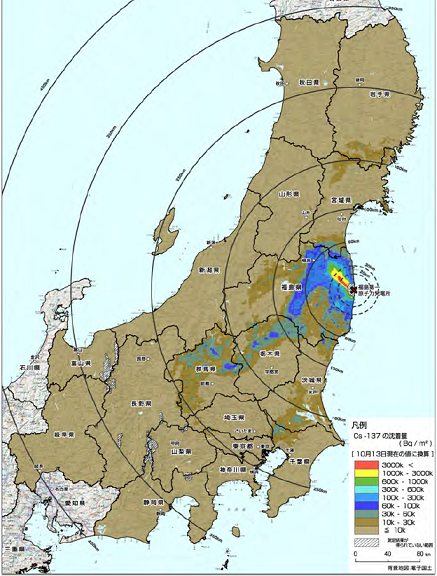 The most heavily contaminated areas are in the eastern half of Fukushima prefecture, within about 80 km of the wrecked nuclear power stations. The southern part of Miyagi to the north and the northern part of Ibaraki to the south also took a hit.

A major radioactive plume moved south-west from Fukushima, polluting the northern half of Tochigi and the northern and western part of Gunma. A separate plume reached the southern part of Ibaraki, the north-west of Chiba and the eastern part of Tokyo.

There is also some caesium in the mountainous far west of Tokyo and Saitama that extended from Tochigi, but most of Saitama, Tokyo and Kanagawa seem relatively OK, as are Shizuoka, Yamanashi, Nagano, Gifu, Tokyama, Niigata, Yamagata and Akita. There is some fallout in a strip from southern Iwate to northern Miyagi, while central Miyagi and the rest of Iwate look clean. There is no published data for Aomori and Hokkaido yet, but based on the distance and the absence of significant pollution in Akita and adjacent parts of Iwate they will probably be fine.

The maps only give the overall picture, as there may be local hotspots in areas that are relatively clean overall, based on rainfall and wind patterns as well as soil and vegetation that can retain more or less fallout.