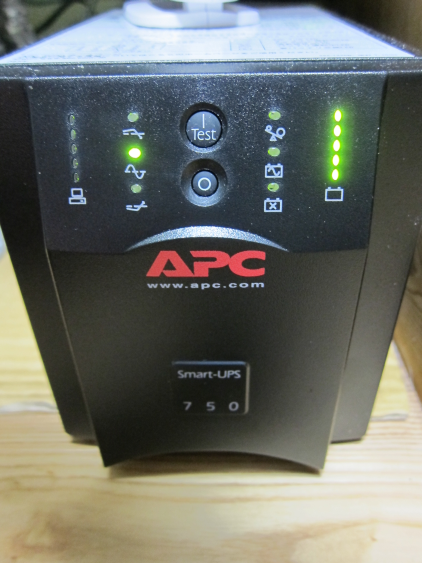 I finally got myself an uninterruptible power supply (UPS). The infamous August heat in Tokyo has been pushing power use including air conditioning close to the limit of what Tepco can supply: All 10 reactors in Fukushima Daiichi and Daini are either destroyed or shut down. In total about 2/3 of the nuclear power capacity in Japan is currently offline. That gave me one more reason to shop for a UPS. The other was that I have a Linux server and Linux file systems tend to use a lot of write buffering, which can make a mess of a hard disk partition if power is lost before the data is fully written to disk.

A friend recommended APC as a brand. Researching which of their ranges was suitable for my server, it appeared that some advanced PC power supplies with Power Factor Correction (PFC) have problems with the consumer level APC models, which output a square wave when in battery power mode. The more business-oriented models output something closer to a sine wave, the shape of power supplied by your utility company. Because of that I went for the APC Smart-UPS range. The server draws less than 50W, so there wasn’t really much point going for the beefiest models. That’s how I picked the APC Smart-UPS 750 with 500W of output power. My exact model is the SUA750JB, the 100 V, 50/60 Hz model for Japan. If you live in North America, Europe, Australia or New Zealand you’ll use either the 120V or 230V models. There’s also a 1000W (1500 VA) model, the APC Smart-UPS 1500, which features a larger capacity battery and larger power output.

The UPS arrived within two days. There’s a safety plug at the back of the unit which when open disconnects the battery for transport, which you’ll have to connect to make it work. The internal lead-acid batteries appeared to come fully charged. They are fully sealed units that are supposed to be leak-proof.

My unit came with a manual in Japanese and English but no software of any kind. It came with a serial cable, which I don’t have any use for, as virtually all modern PCs no longer have legacy serial and parallel ports. What I needed was a USB cable with one type A and one type B connector and that was not included. I am not sure why APC bundles the serial cable and not the USB cable. For an item in this price range, the USB cable should not be extra. However, I had a couple of suitable cables lying around from USB hard disks and flat screen monitors with built-in USB hubs, so it wasn’t a problem. You may want to check if the unit you’re buying comes bundled with the USB cable or if you may need to get one separately.

Once you connect the UPS to the PC using a USB cable, you should be able to verify that Linux has detected the device. Run:

The software I’m using for linux is the apcupsd daemon, whose source code is available on SourceForge. I compiled it this way:

To be able to run it you need to set some config files. In /etc/default/apcupsd set

Stop and start the daemon and you’re in business:

While the daemon is stopped you can also run apctest to run various tests on the unit.

Test that the UPS works, by pulling the power cable from the wall socket. The UPS should raise an audible alarm and its LEDs should switch from the sine wave symbol to the sine wave with battery poles symbol. Also be aware that UPS batteries do not last forever, especially if they’re used in a hot environment. You may get anywhere between 2 to 4 years of use out of them. Replacement batteries from third parties are usually available for much less than original parts from the UPS manufacturer.