A failure of a sea water pump at unit 5 of the Fukushima 1 Nuclear Power Plant demonstrated the still volatile situation at the reactors. It allowed water temperatures inside the reactor (which had officially been in “cold shutdown” since March 20) to climb as high as 93 degrees C again before a replacement pump restored the water flow and allowed temperatures to drop again. Unlike the heavily damaged units 1 through 3, units 5 and 6 (along with unit 4) had been shut down for maintenance when the quake and tsunami hit. Due to their slightly higher elevation they escaped the worst of the tsunami. A single backup diesel generator for units 5 and 6 survived. So far TEPCO has not announced any plans yet to permanently decommissioning the two units, although the government of Prime Minister Kan pushed for that.

At 9:14 pm on May 28th, we found that one temporary residual heat removal system seawater pump of Unit 5 stopped. At 8:12 am on May 29th, replacement work to the spare pump started. After finishing the replacement work, we started the pump at 12:31 pm, and restarted cooling from 12:49 pm.

The RHRS is a cooling system that is used whenever the reactor does not drive a steam turbine, where heat is removed via the attached condenser unit. It is also used to cool the water in the spent fuel pools. Both a loaded reactor core and fuel elements in the pool produce decay heat that needs to be removed for months and years after a shutdown. Both the condenser and the RHRS require a steady flow of seawater to carry away heat.

There have been some online discussions about spiking radiation level figures in the dry well (primary containment) of unit 1. Here is a graph from atmc.jp: 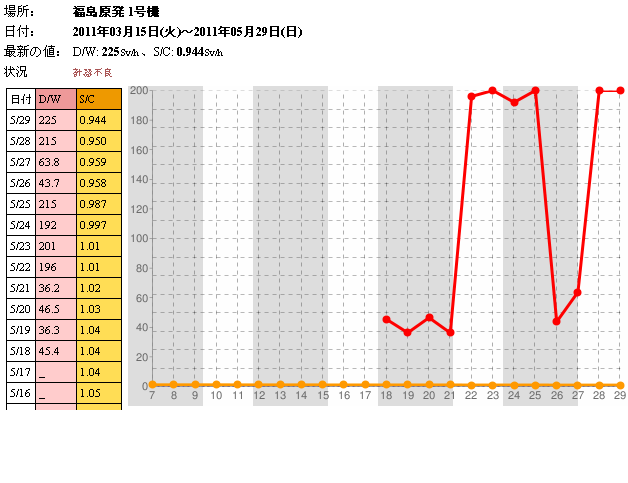 The original data for this graph are figures published by TEPCO/NISA of the CAMS radiation monitor readings for the three units. Until May 25 this data was available in daily updates on the NISA website under “Seismic Damage Information（the nnnth Release）(As of hh:mm May dd, 2011″, document “Fukushima Dai-ichi Nuclear Power Station Major Parameters of the Plant (As of h:mm, May dd)”. Since then NISA no longer seems to publish those figures. It can still be found vi the “Status of Fukushima Daiichi and Fukushima Daini Nuclear Power Stations after Great East Japan Earthquake” page on the TEPCO website though: Look for “The parameters related to the plants in Fukushima Daiichi Nuclear Power Station”, which has a link to the latest document and a ling to an archive page with previous daily data sets. “CAMS radiation monitor” has entries for D/W A and B, S/C aA and B. The D/W B sensor is the one in the above chart. Strangely, the numbers on the atmc.jp do not always match the data on the NISA/TEPCO sites:

The source of the discrepancy between the two sources is unclear as ultimately TEPCO must be the only source of data on the reactor.

Some people have speculated that the sudden increase in the graph indicates that a large amount of fuel melted through the pressure vessel and leaked onto the floor of the dry well. However, that would not explain why the values significantly dropped again and then shot back up again.

TEPCO states that they think the radiation sensors are malfunctioning. I suspect their explanation is the correct one, but how reassuring is that?

Trying to manage a badly damaged nuclear reactor (actually, 3 of them!) and the 4 loaded spent fuel pools next to them with broken instruments whose readings can not be trusted any more is a bit like trying to drive a car without a speedometer and with a shattered windscreen that prevents you from seeing the road, going only by the directions of your passenger who sticks his head out of the window to keep you on the road.