Tokyo Electric Power Company (Tepco) president Masataka Shimizu was turned down twice when he requested a meeting with Fukushima prefecture governor Yuhei Sato who was very upset about the insufficient safety of Tepco’s nuclear power plants in the prefecture, which were not designed to cope with a tsunami the size triggered by the March 11 quake. Tepco was unable to reestablish cooling for too long, leading to core damage, forced venting of radioactive gas, hydrogen explosions that destroyed reactor buildings and spread radiactivity, a cracked containment, leaks of radioactive water, damage to reactor cores and to spent fuel pools.

Large parts of Fukushima prefectures are radioactively contaminated now. Agricultural and fishery products from the largely rural prefecture will have difficulties finding buyers, even if they were to meet Japanese safety regulations.

Some 80,000 people in a 20 km radius around Fukushima 1 (an area of about 600 square kilometers or 60,000 ha) have lost their homes and will now be prohibited on penalty of a fine of up to 100,000 yen (about US$1,200) or 30 days in jail from returning. The evacuation zone will now be extended to Iitate, Katsurao, Namie and parts of Minamisoma and Kawamata, which lie between 20 and 50 km northwest of Fukushima 1. Another 10,000 residents will be affected by that extension. In Namie, at the edge of the 20 km exclusion zone, backround radiation of 49.8 μSv/h was measured. The natural rate in Japan before the accident was between 0.02 and 0.06 μSv/h. Other notable readings were 3.5 μSv/h in Toyota town some 50 km to the west, 15.5 μSv/h in Iitate, some 30 km to the Northwest and 28.6 μSv/h in Namie 30 km to the Northwest. The current post-accident rate in Tokyo, 230 km to the south, is about 0.08 μSv/h, twice its pre-accident rate. Residents of the newly condemned areas have one month to move out. 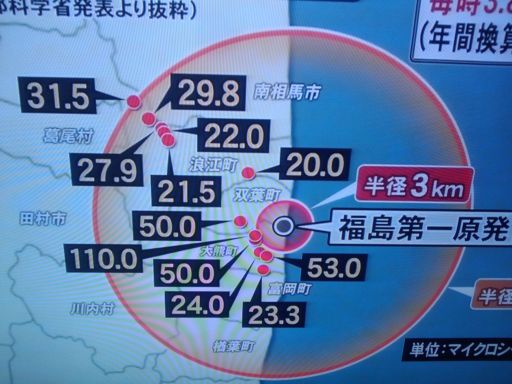 Inside the exclusion zone even higher values have been measured, for example around 50 μSv/h in several locations 4-5 km from the plant and 110 μSv/h just over 3 km West of the plant. Under these circumstances, it seems almost unbelievable that Tepco was still talking about restarting units 5 and 6 of Fukushima 1, which lie only a few hundred meters from the wrecked units and had also been surrounded by seawater during the tsunami, but were shut down for maintenance at the time. Who is going to work in those plants and under what working conditions? As of April 21, the radiation level at the South side of the administration building located half way between units 1 and 5 was an astounding 490 μSv/h.

Before the disaster Japanese power companies had been planning to build enough new nuclear power stations to push the nuclear share of electricity generation from 30% to 50%. It remains to be seen, where they would like them built and what the local population and politicians will have to say about that. I am sure the residents of existing reactor sites are watching very closely as 90,000 of their fellow citizens are being evicted from their homes, their livelihoods destroyed, their communities devastated and ripped apart, their regional agricultural products shunned on supermarket shelves.

How much money do you have to pay a quiet town or village somewhere on the Japanese coast to agree to accept another nuclear power station? I still believe there are some things you can not buy with money. I grew up in Eastern Bavaria, some 30 km from the village of Wackerdorf, which the Bavarian state government had selected as the site of a huge nuclear waste reprocessing plant in the 1980s. Local unemployment was high, so the government thought the promise of jobs and local tax revenue would win over the locals, but nevertheless resistance turned out to be fierce. For years the struggle tore the country apart. Families from grandmother to grandchild would walk to the construction site fence every weekend to protest. Then came April 26, 1986: After the Chernobyl disaster the plan became a lost cause. It was officially withdrawn 2 years later.

I don’t expect Japan will rush to shut down its existing nuclear power plants. However, it will become next to impossible to build new reactors (14 are planned by 2030). Especially the oldest reactors and the most seismically vulnerable ones will receive increasing scrutiny because of a nervous local (and national) population. This is not the end of nuclear power in Japan, but it may be the beginning of the end.