We have four smartphones in our household, three Apple iPhones and one HTC Android phone, but for the last six months I basically couldn’t make calls indoors. This has now changed because of “Home Antenna FT”, a so called 3G femtocell. 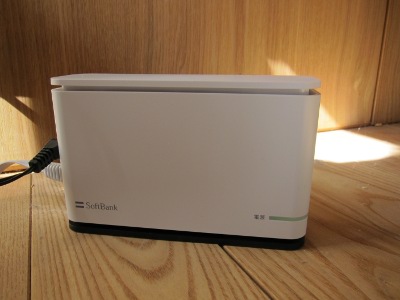 When we moved into our newly built home in Setagaya-ku, Tokyo half a year ago we discovered we had virtually no cell phone reception. Most of the time all four phones were out of signal range. If I left my phone leaning against the window pane in my office then I usually had enough of a signal to have it ring, but I couldn’t pick it up from there without immediately cutting the connection. I would then have to walk out into the street, wait to see some bars indicating a signal and then return the call to whoever had tried to reach me.

After several weeks I found out that SoftBank Mobile, our mobile provider offers a small device called “Home Antenna FT” for free to customers with connection problems. It acts as a low power mobile phone tower covering only the inside of one home, connecting to the SoftBank Mobile network using a broadband connection such as DSL or Fibre To The Home (FTTH) . The device is called FEMTO AP-SR1-1 and is made by SerComm Corporation in Taiwan.

I applied for one in September, but then later was told it couldn’t be used with J:COM, my then cable internet provider. I would have to change to NTT FLET’S Hikari (FTTH) or Yahoo BB (DSL). So I bit the bullet and changed provider in December, only to find out later that J:COM had also concluded an agreement with SoftBank Mobile. I wouldn’t have had to change after all.

Another month and a half passed until a box was delivered by Takkyubin (parcel service), which contained a broadband access router for use with the femtocell access point, but no access point. I already have a router and didn’t really want to replace it, but according to the instructions the new router was supposed to be connected in parallel to any PC that was hooked to the NTT Flet’s Optical Network Unit (ONU). I left it sitting on the shelf for a week until this morning when another, smaller box arrived. It was the access point.

I first hooked up the WAN port of the SoftBank router to the FLET’S ONU and the single network port on the FEMTO AP-SR1-1 to a LAN port of the router as per the instructions. I turned off / turned back on the mobile phone to make it seek a fresh base station, but initially had no luck. So I moved the access point to my office and and connected it to a small ethernet switch on the LAN side of my router. A little while later I had full signal strength on my mobile. Yeah! 🙂

I then moved the access point to a central location in my house, where I have with a WLAN access point with internal 4 port switch that is connected to the router using category 6 LAN cable and connected it to one of those 4 ports. Now the entire house is covered by the 3G signal. The unneeded SoftBank router went back into its cardboard box.

All in all, once I received the hardware it was a fairly painless experience.

Some people are concerned about cellphone radiation and having a micro version of “cell phone tower” right in the living room may be worrying to them, but in fact it’s a benign alternative to not having one: The further the base station, the more power the mobile phone has to emit to connect to it. By keeping the base station inside the home the mobile never never has to jack up the signal strength to levels that would penetrate exterior walls. If I do walk out of the front door, all bars disappear and only reappear when I stand far enough out in the street, indicating the device uses minimal power and only just covers the interior of our home.