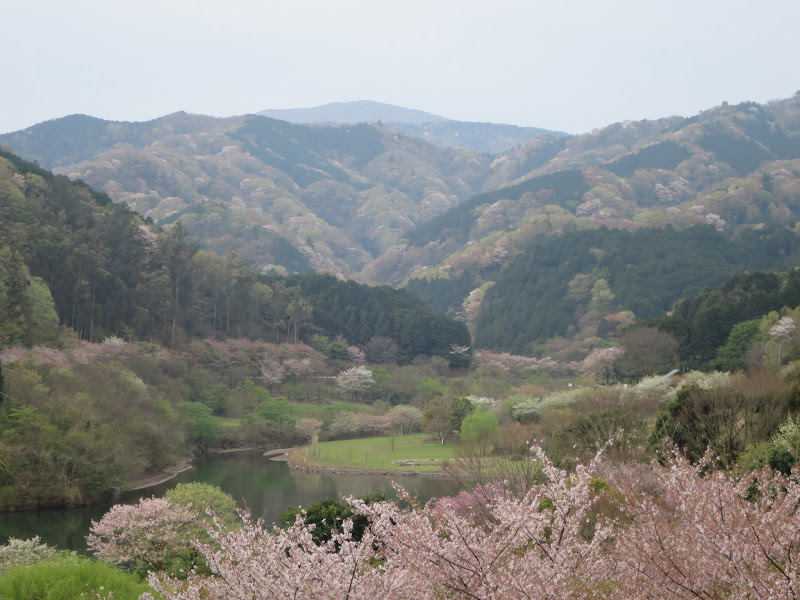 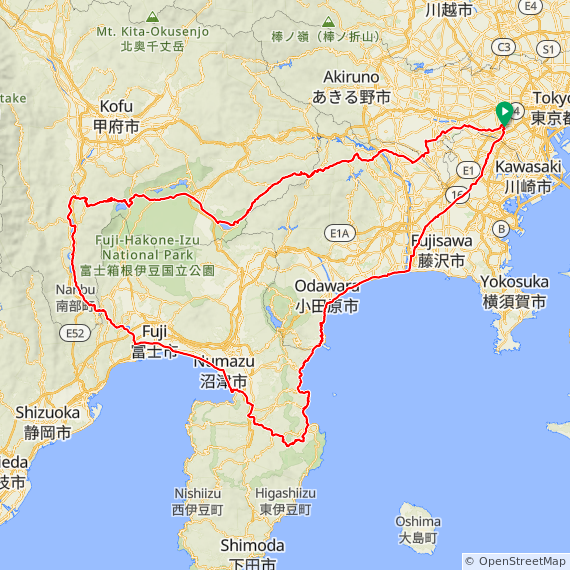 Last April I for the first time managed to complete a 400 km brevet under the 27 hour time limit. It was 2015BRM418, a 400 km loop around Mt Fuji with AJ NishiTokyo (BRM418西東京400km富士大回り). I think it greatly helped that two weeks before the event I pre-rode the course at my own pace. Having done the same course on a rainy Easter weekend made the actual event seem a lot less intimidating than it would have been otherwise.

In the process I got to see a lot of beautiful cherry blossoms across four prefectures of Japan (Tokyo, Kanagawa, Yamanashi and Shizuoka). So I thought, I’m signed up for this year’s AJ NishiTokyo 400 km and it’s this time of the year, why not do the same crazy thing again? 🙂

A few things were different though:

1) I decided not to do the full 400 km brevet route plus almost another 60 km to get to the start and home again from the finish. I cut out about 50 km in the middle (PC1 to PC2 and back to where the courses passes near PC1 again), getting me closer to 400 km instead of last year’s 460 km mammoth ride.

2) I didn’t start to prepare for the ride until a little before midnight on Friday. I originally wanted to ride from Sunday to Monday, but then had to move it up a day. Consequently I only slept a bit over 5 hours before the ride, which is not good. I ended up getting very sleepy, more about that later.

3) On the upside, it didn’t rain, which helped. I still wore my rain gear, but only for the cold at times.

4) I did the ride on my new bike, the Elephant Bikes National Forest Explorer, on which I had already completed 200 km and 300 km brevets in February and March. I don’t have a rinko bag for the Elephant NFE, so aborting the ride and taking the train home like I did after my DNF (Did Not Finish) in 2014 was not an option, as it would have been with my folding road bike, the Bike Friday Pocket Rocket. 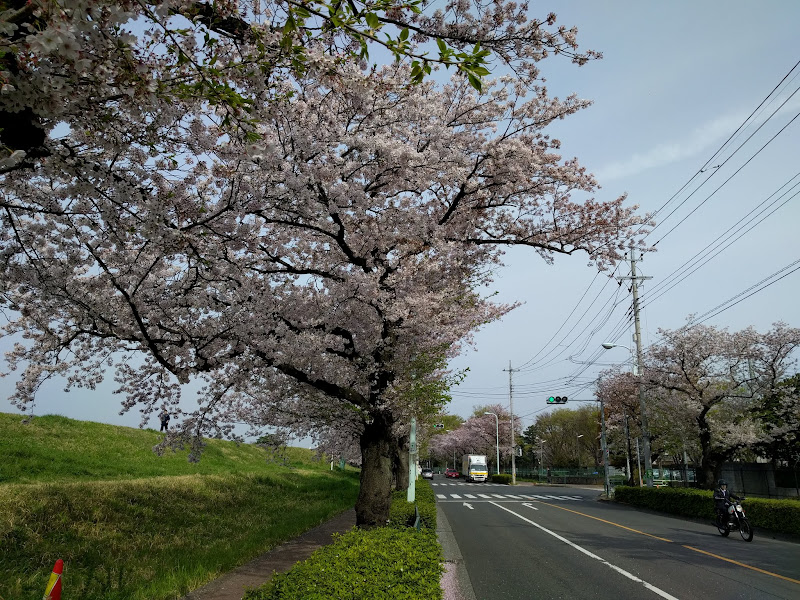 I left home around 07:30 and cycled to the starting point in Machida 28 km from here. From there I followed the course through Sagamihara to Doshi road, up a mountain valley towards Lake Yamanakako near Mt Fuji. 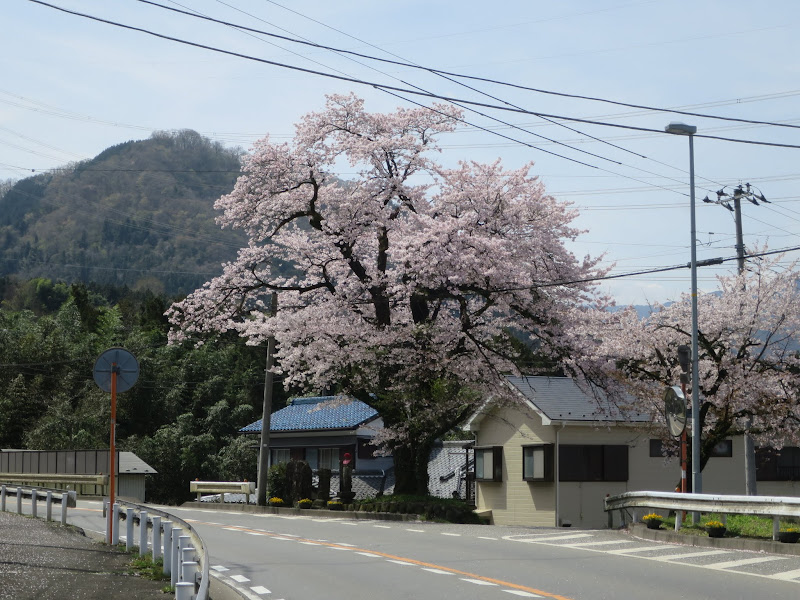 While the cherry blossoms were well past their prime down in the Kanto plain, the higher up I got the fresher or even immature they still looked. 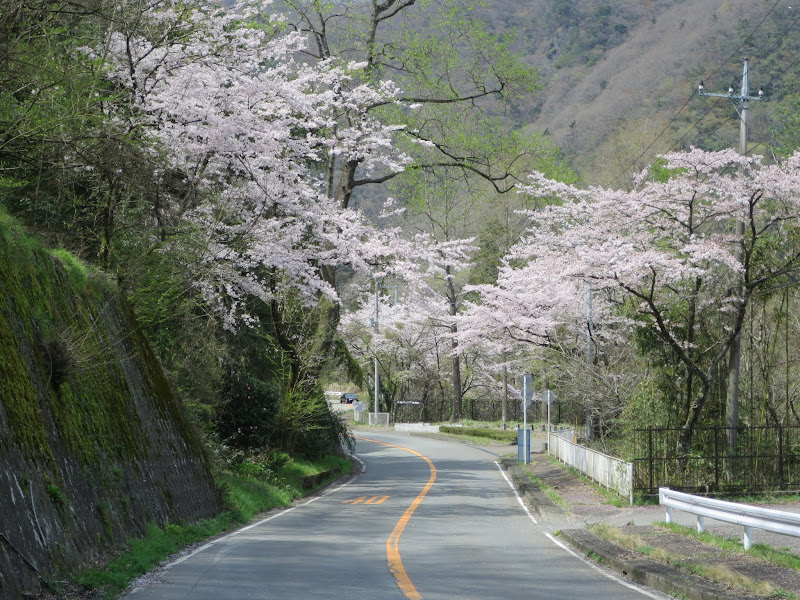 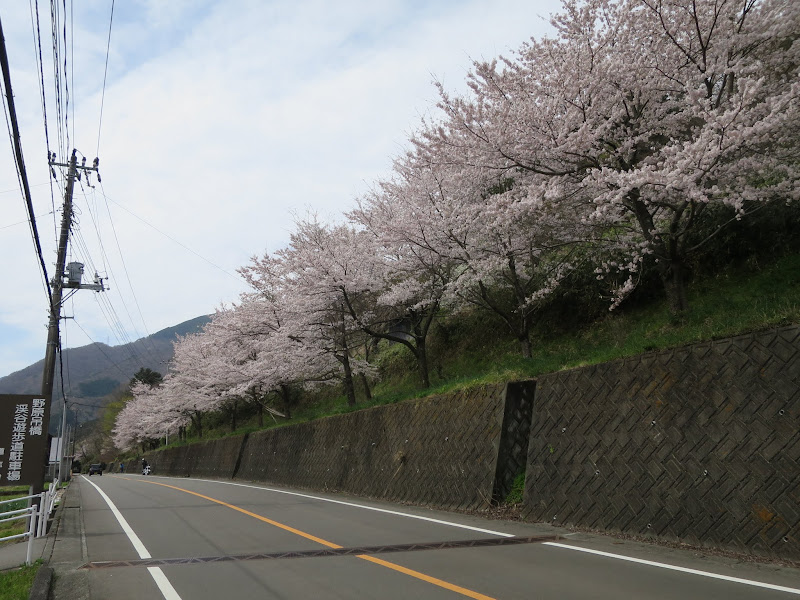 Before I reached Doshi village they seemed to be in full bloom (“mankai” in Japanese). 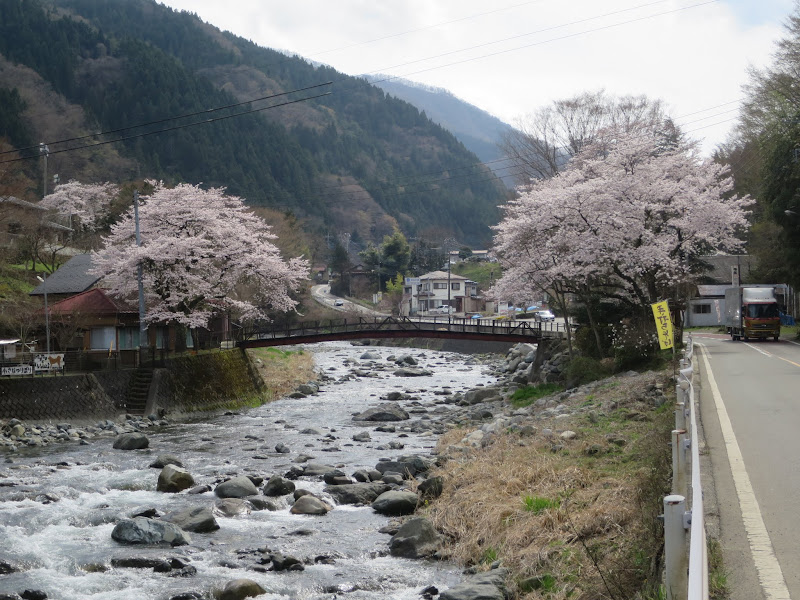 I stopped for coffee and cake at the Doshi Road Station (どうし道の駅, Doshi Michi no Eki). 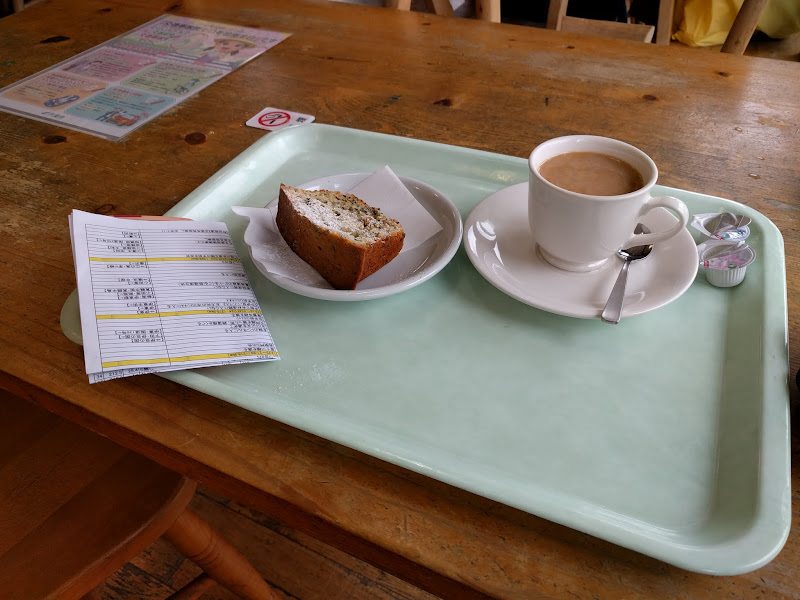 At the top of valley, on the final climb to the pass the cherry trees either had no blossoms at all yet or just a few blossoms with the rest of the branch still as buds.

It was markedly cooler once I got out of the tunnel before the descent to the lake. Soon I saw my first views of a big Mt Fuji. I was lucky and it was mostly unobscured. I stopped for pictures several times, on the way to the lake and then on the bike path along the lake shore. 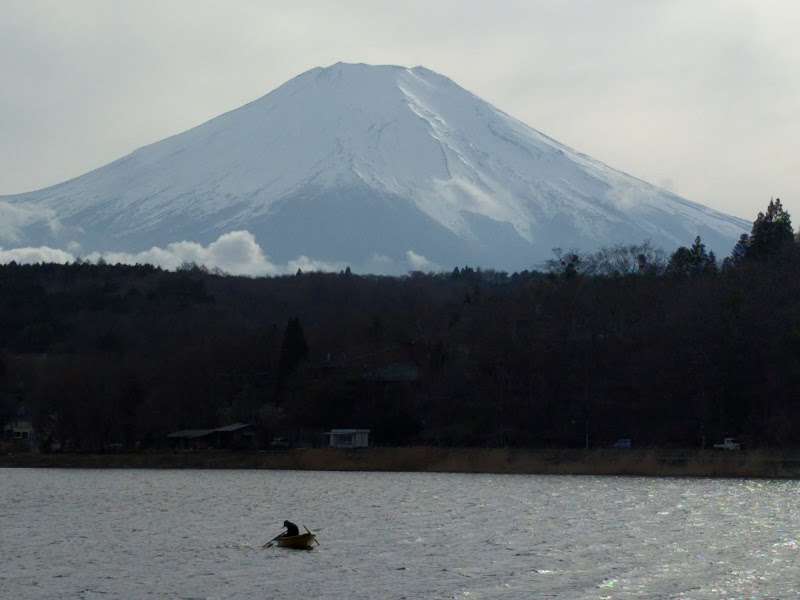 From the west side of Lake Yamanakako I joined major Rt138/139 that would take me to Lake Motosuko. I had some food at a convenience store and put on more clothes again. Rt139 near Fujiyoshida and Kawaguchiko is not only busy but also very rough and really could do with resurfacing, but at least the wide tyres of the NFE took the edge off the bone-rattling ride of the crumbling, patched-up and pot-holed asphalt. 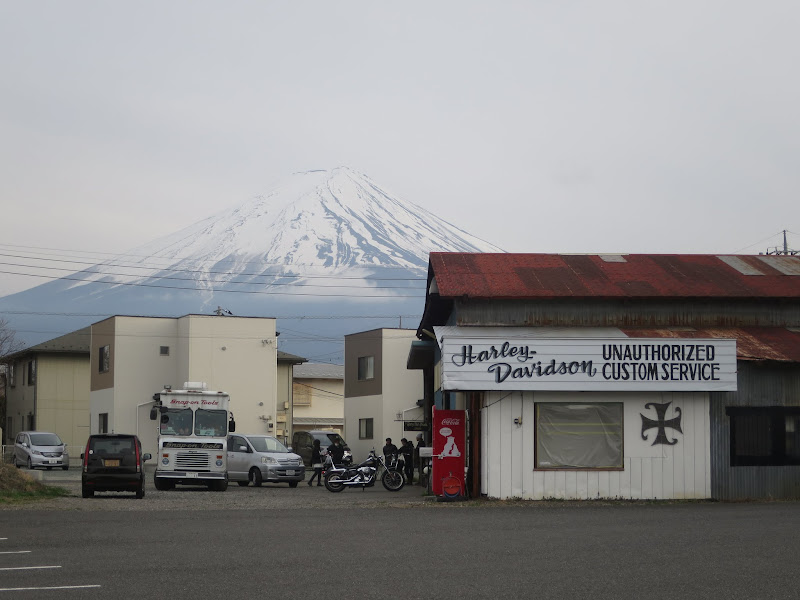 I passed many cars as the road went downhill towards Kawaguchiko, then it started climbing again towards Lake Saiko, before finally descending again near Lake Motosuko.

By the time I reached the turn-off to Motosuko, the sun hat set and it was rapidly getting dark. I took a few more pictures at the deserted lake in the fading evening light before entering the tunnel. On the steep descent on Rt300 I kept the speed down, not wanting to take any chances misjudging a corner in the darkness. Finally I got to the turn-off to another climb and tunnel over to an adjacent valley. From there the route went downhill again all the way to PC1.

Looking at my time, I decided to cross the Fujikawa river here and head down Rt52 after a food stop. Traffic wasn’t too bad. Eventually the course crossed over to the left bank of the river again, where Rt300 joins Rt52. It followed the Minobu railway line down to Shibakawa. I remembered this part of the route as more hilly from last year’s ride than I experienced it on this ride. From PC3 it wasn’t that far from the coast in Fuji city, but I started yawning more and more. I was about 200 km from home by then.

I was very glad to cross the Fujikawa river and turn east, towards Mishima. I did OK on the urban stretch along the coast and until I entered Izu. The closer I go to Shuzenji, the more I felt the night time cold and the tiredness. When I finally arrived at PC4 in Shuzenji in the interior of Izu around 05:00, I got a cup of coffee and took a one hour nap outside, leaning against a wall.

After I woke up again, I got back on the bike and started climbing Rt12 to the pass over to Ito. The sun was up by then and I enjoyed the early morning views. 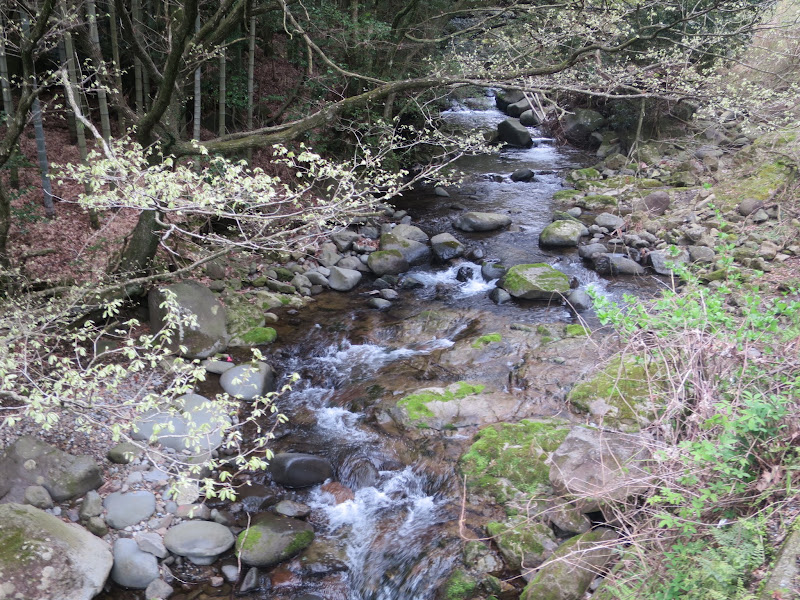 The cherry blossoms around there were beautiful. 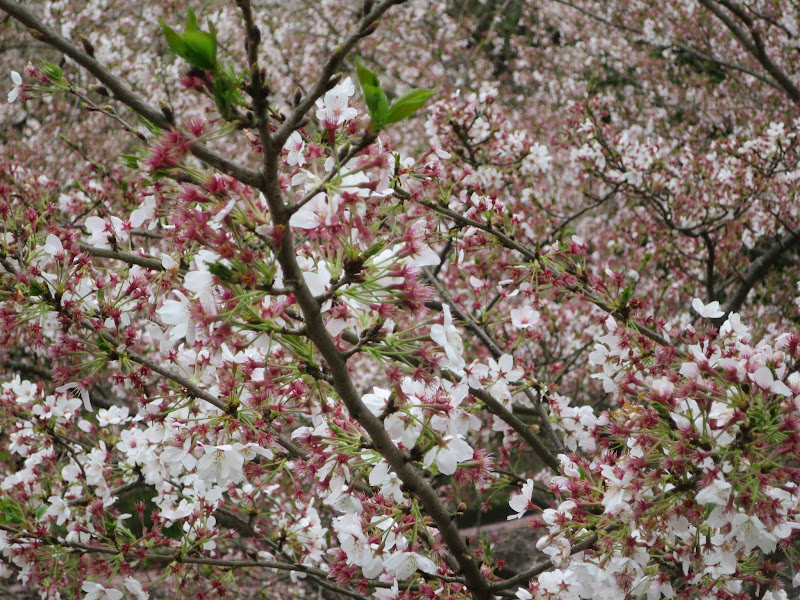 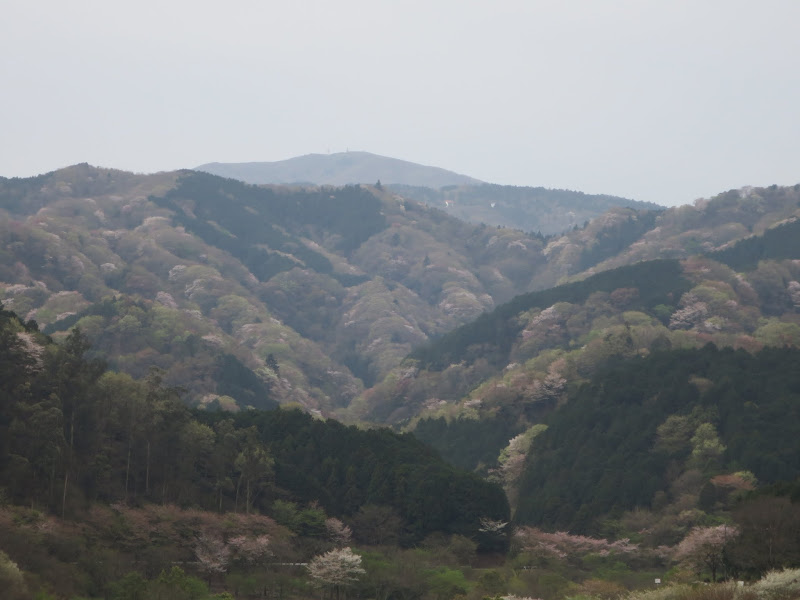 The long descent down to the coast in Ito gave me some recovery time, but there were still another four climbs over the next 30 km to Odawara, until the coastal road finally flattened out. Near the fake Atami castle I found some trees with piles of dry leaves underneath, which invited me to lie down again. 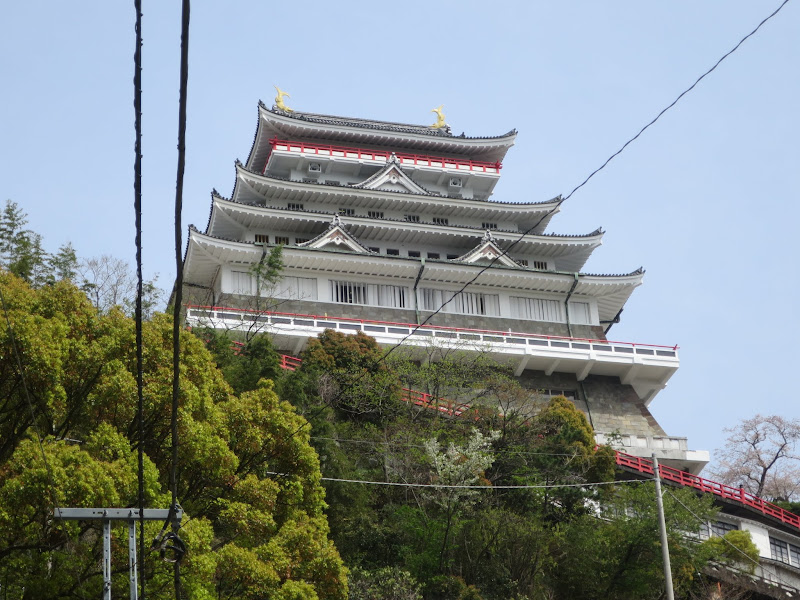 I used my rain gear bag as a pillow and rested on a futon of dried leaves, only metres from the busy coastal road and its weekend traffic. An hour later I woke up again, refreshed enough to ride home.

In Odawara I stopped for cherry blossom pictures at the castle moat. 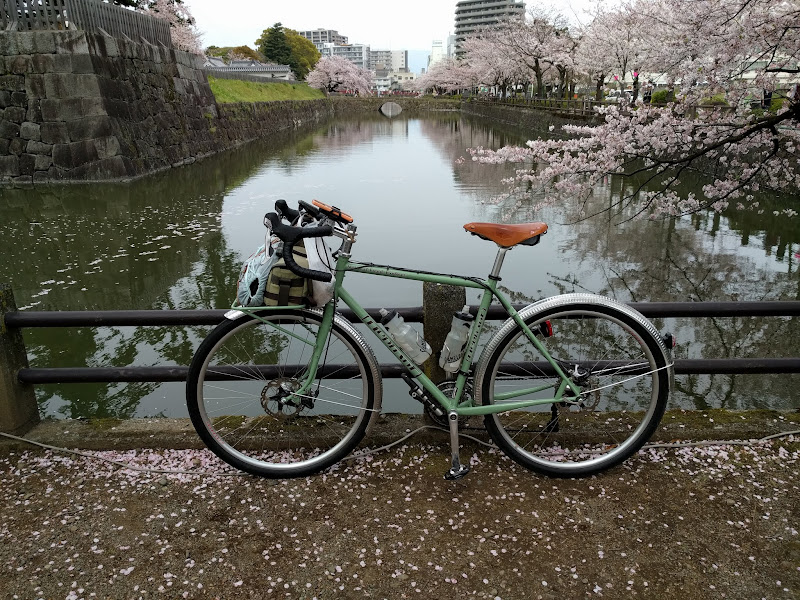 Near Hiratsuka I turned off the brevet course to seek the shortest possible route home. While Rt45 was indeed much shorter than the randonnee route, it was also quite hilly, especially the half closer to Tokyo and it was not a nice road, with lots of cars. In the end it even merges into Rt246, probably my least favourite cycling road in Kanagawa prefecture. Still, it got me home before 17:00 on Sunday afternoon. My wife was glad to see me return safely and that’s always a good thing 🙂

I probably would have enjoyed the ride more if I hadn’t started with the ambition of staying close to brevet speeds. I would have slept earlier and longer and would have had more fun on the last part. Still, I ended up with close to 400 km and 3800 m of elevation gain with many, many beautiful views. The night time part of the ride would have been easier with warmer clothes too. I was over-estimating how warm it would stay after dark.

I am seriously considering trying the Bike Friday again for the brevet ride. It would make it easier to cut the ride short and take the train home, should I lose the battle against sleep. I love both my National Forest Explorer and my Bike Friday, one for its comfort, the other for its versatility. They are both great bikes and Japan is a great country to ride them in. 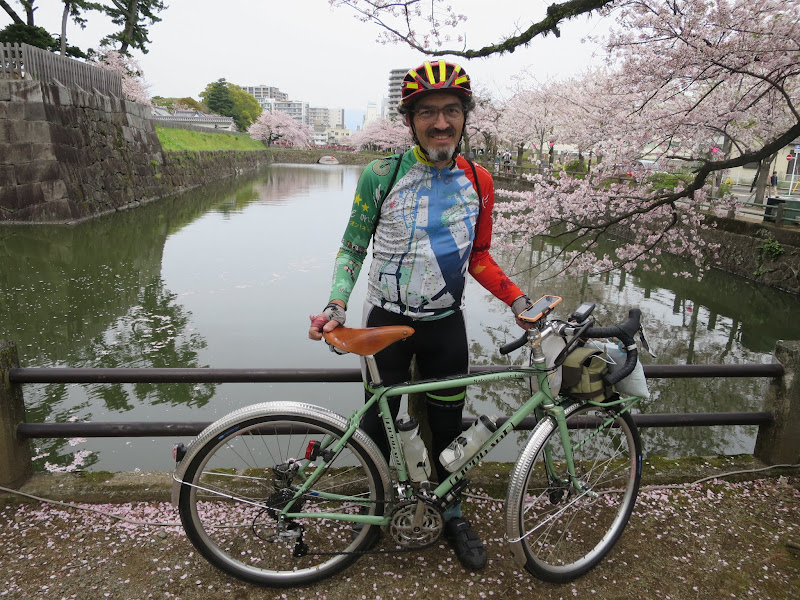