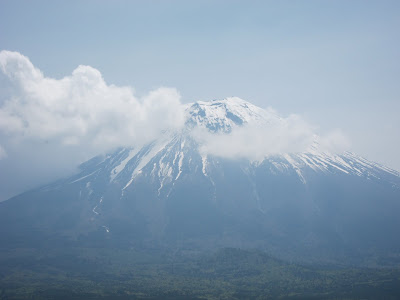 In the evening of last Sunday I returned from my first brevet ride, a long distance cycling event. I was sunburnt, exhausted and dead tired. The event was BRM519 NishiTokyo 300 km Fuji, a 300 km brevet around Mt Fuji staged by Audax Japan NishiTokyo. It was quite a mountainous course, with 2800 m (9200 ft) of climbing (see map). Also participating was my friend Jose, but we rode separately for most of the course because he is faster. In preparation for this event I had done three training rides (227 km, 200 km and 235 km) since March that followed at least part of the route, one of them with Jose, whose company and advice has been invaluable. 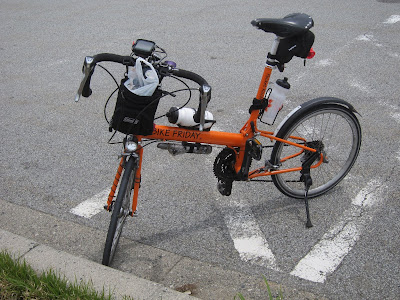 From Machida in western Tokyo we rode down to Enoshima on the Pacific coast, followed the coast to Odawara and climbed up to Gotemba. From there we rode down to the coast near Numazu, followed the coast to Fujikawa, then headed north on a long climb on the extended slopes on the west side of Mt Fuji. From over 1100 m on the NW of Fuji the road descends to Fujiyoshida and further down to Tsuru. The final stretch follows mountainous R35 to Sagamiko (extremely steep in places but great descents) and climbs over Otarumi Toge on R20 near Mt Takao (which seems trivial after all the previous climbing).

Though the 15 km/h minimum pace implied by the 20 hour time limit may seem modest, it includes all food and sleep breaks and a course with plenty of climbing. The people who design these courses like back roads and hills. Some of the R35 climbs I was crawling up at 6.5 km/h in my granny gear. You go uphill for 2 hours before Gotemba and 4 hours solid at Mt Fuji, which you can never make up on faster downhills from there. The 22:00 start means the first 6 1/2 hours are at night, so not only do you need proper lights, you also lost a night of sleep.

Lack of sleep proved to be much more of a challenge than distance or elevation. If there was one thing I’d do differently next time, it would be to make sure I get a good few hours sleep during daytime before the night time start. I had meant to do that, but instead spent that time running around looking for extra lights, as I found out from Jose that I needed two lights at the front and two at the rear (one of which could be on the helmet). The first rear light I bought didn’t work when I tried it at home, so I returned it and got a another and finally had only napped 20 minutes before I took the train to Machida.

At the brevet reception: 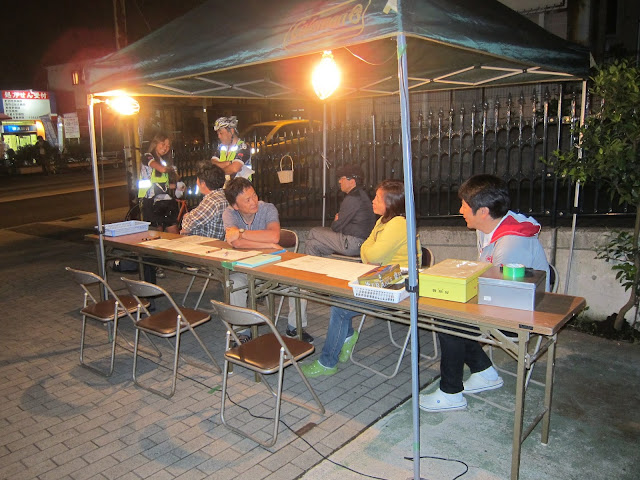 People there were very friendly, though they were quite surprised I wanted to ride the brevet on a small wheeled folding bike. 80 people had signed up for the ride. I received my brevet card and instructions on how to gather receipts at the unmanned checkpoints (PC = point de contrôle).

After a group briefing each bike and rider was checked to make sure we met all the conditions about lights, bells, reflective clothing, etc. Then we were off into the night. 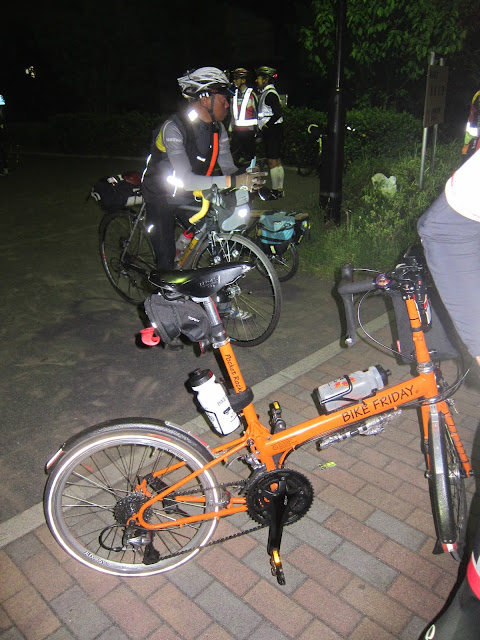 Jose and I were riding together for the first couple of km, but separated soon when I stopped to remove a layer as I was warming up. There were plenty of fellow riders for following a lead rider. With the pace at which we were going towards the coast (except for traffic lights), I was feeling like I was on the Enoshima Express train 🙂 We got there a little before midnight. I got my brevet card signed (this was the only manned checkpoint) and I refilled my water bottles at the public toilet where PC1 was located, then headed off with Jose and another rider after a few minutes. I soon dropped off again and rode by myself until other riders came along around 10 km before Odawara, where PC2 was located.

PC2-PC4 were unmanned, that means they were convenience stores where you buy some food or drink, making sure to keep the receipt to prove when you were there. Nevertheless the ride organisers came by car to join us at each of these stops, to check everyone was doing OK and to offer encouragement.

From Odawara the climb to Gotemba starts very gentle, but continues for 30 km for an altitude gain of 460 m. I was lucky to end up riding in a group of 5 that set a good pace I could keep up with. As the route got steeper though, I had to work harder and harder and drafting made less difference, so I waived the rider behind me to pass and continued on my own. Somewhere along the way I came across Jose, who was just about to lie down and take a nap in a bus shelter. As it got colder during the night I put on my trousers from my rain gear.

Somewhere along the 25 km route from Gotemba to the coast the sun came up and I could see Mt Fuji: 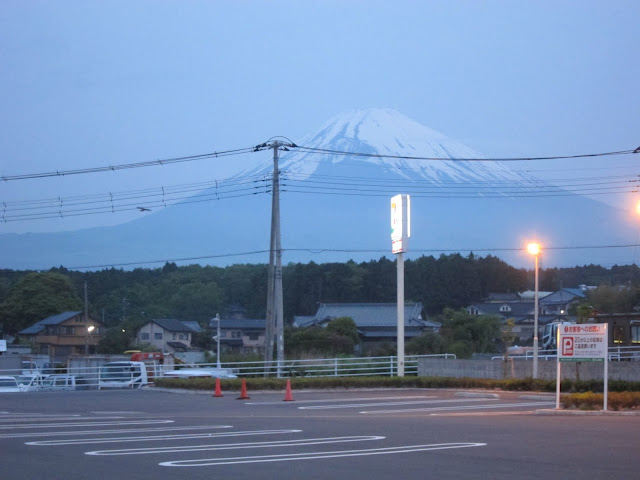 I led another rider at a good speed, but was feeling the lack of sleep as I was cycling along the coast. We crossed Fuji river and headed up inland towards the next unmanned checkpoint (PC3).

A fellow brevet rider at PC3: 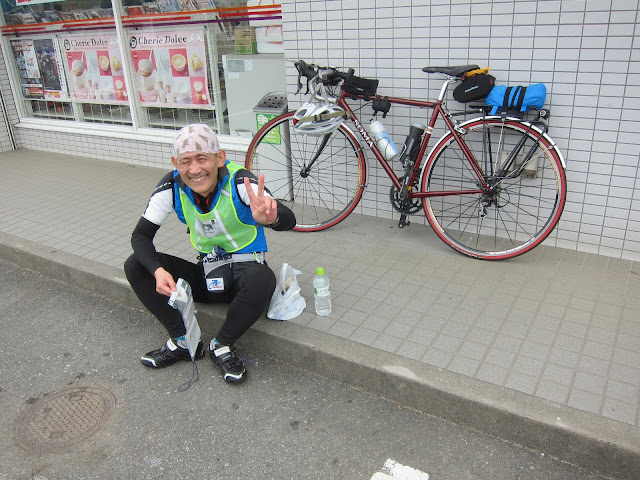 Before the longest climb: 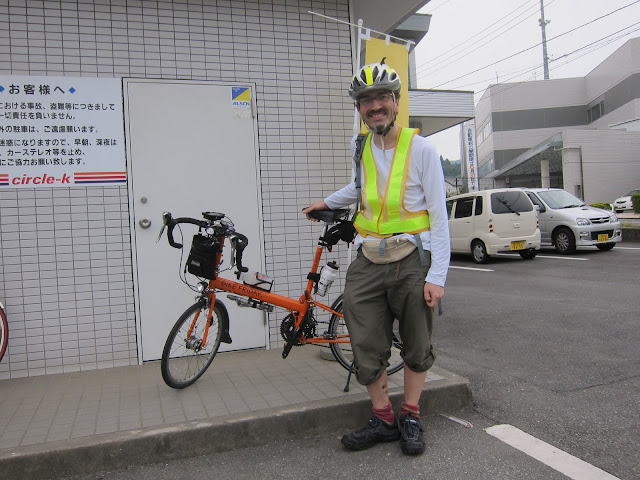 The 1100 m climb from sea level, starting at about the halfway point of the 300 km up to the pass above Lake Motosu was the hardest part of the ride. The scenery is beautiful though, with many dairy farms. The smell of cow dung reminded me of my home village 🙂 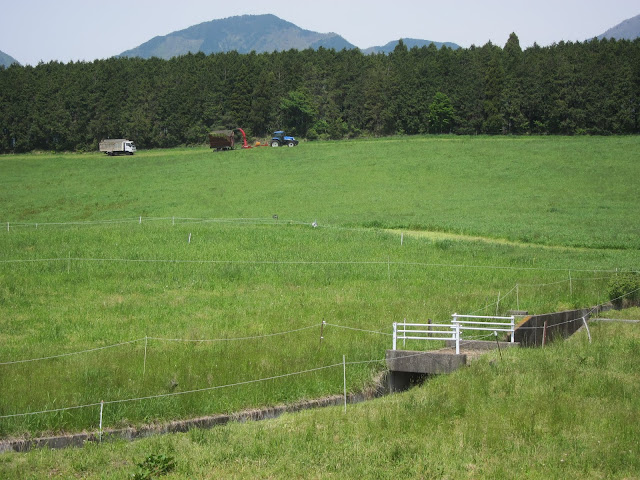 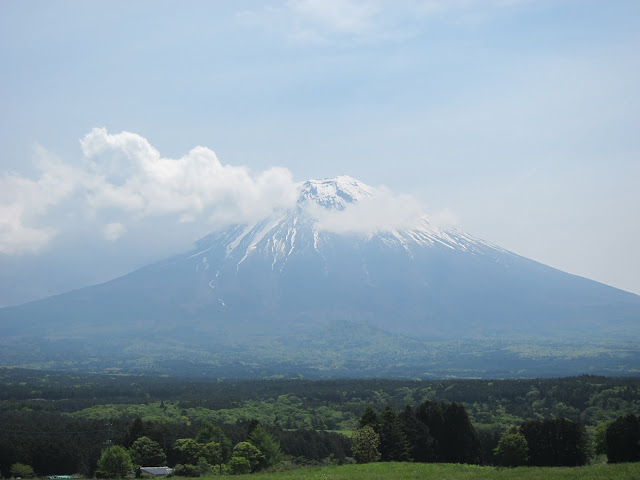 Lake Motosu from the pass: 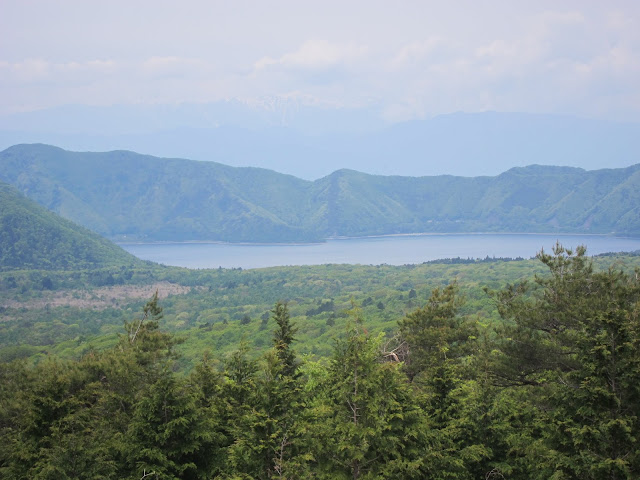 During the climb I got so sleepy, I had to find a spot to lie down and catch a nap (a slab of concrete next to a rice paddy, with my rinko bag as a pillow), as I felt it wasn’t safe to continue in my state. The same thing happened again on R35 between Tsuru and Sagamiko. I had been 1 1/2 hours ahead of the minimum pace of 15 km/h at PC2 before Mt Fuji, but after those naps didn’t know if I would still make the time limit until almost the very end, when I fought traffic in Machida to make it back by 18:00.

I was so glad when I got back safely and it was all over. I had done well with my training, with eating and drinking and with navigation, but managing naps is definitely something I’ll need to learn if I am to ride brevets again.

I am also looking forward to trying proper cycling shorts which I’ve got on order. Cotton underwear rubbing against certain parts of the male anatomy did become irritating towards the end of the ride. Also, I’ll need something other than a back pack for my stuff, because my shoulders got itchy from the straps, especially with the sweat in warm weather.

They say any brevet over 200 km isn’t much fun and they’re probably right, unless you’re a bit of a masochist. Riding brevets adds a number of challenges beyond personal long distance rides, such as managing time (including sleeping time). It tests planning and self discipline as much as cycling skills. It does give you an excuse for a bunch of long training rides in the mountains. On the brevet itself you’ll meet some extremely nice people who enjoy cycling very, very much. The brevet was almost as hard as my first climb of Mt Fuji last year and “fun” is maybe not the right word to describe it, yet I would definitely recommend giving it a try at least once if you like long rides at a pace that mere mortals can still train for. 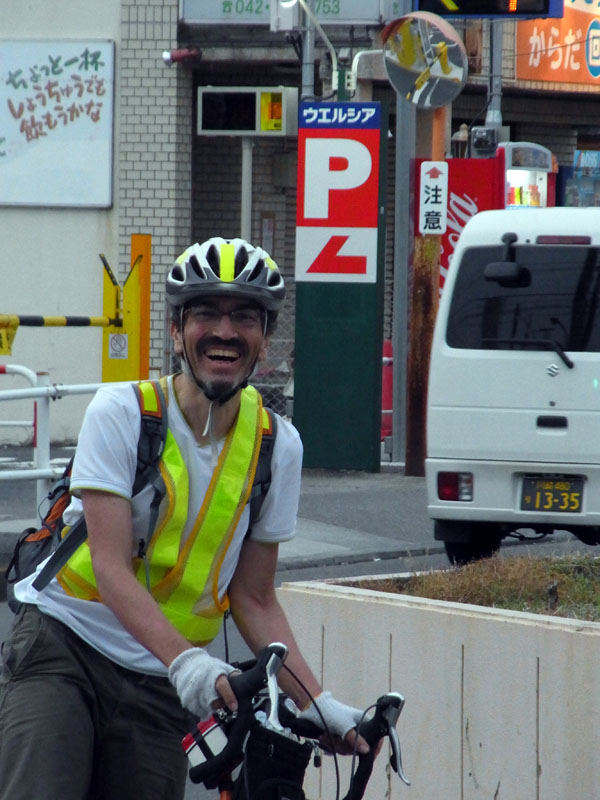