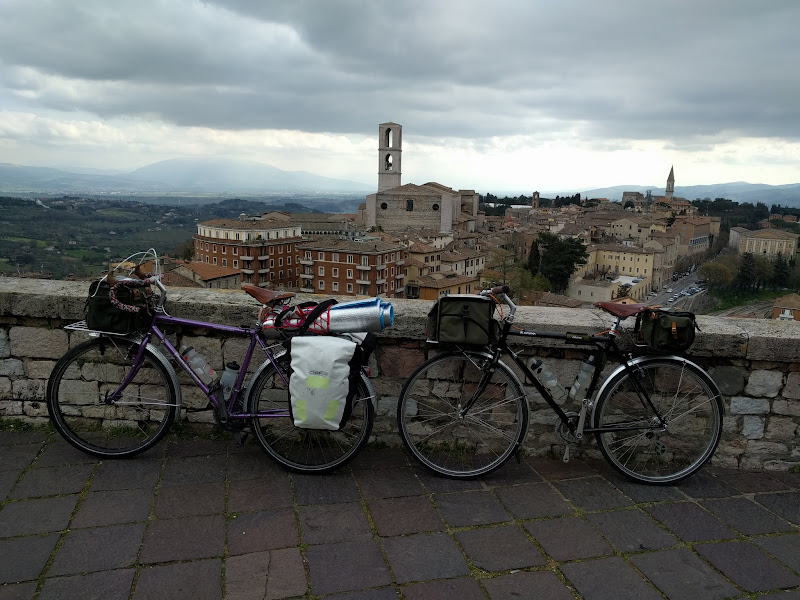 Last year, I went bicycle touring in Italy with my son Shintaro. I borrowed his Araya Federal while he used his Panasonic touring bike. The Araya is an inexpensive randonneur bike that uses 650A wheels and down tube shifters. The fork with the front wheel and fender attached can easily be removed as a whole to pack the bike for travel by train or air. It performed very well for me. Unfortunately, on the return trip to Japan the front wheel got bent out of shape, probably by rough baggage handlers.

I finally decided to get new wheels built for it by Tim Smith of GS Astuto in Kawasaki, near Tokyo. I received them last week.

The wheel set is built up with a Shimano DH-3N80 dynamo hub at the front I had already been using with my Bike Friday since December 2011. That was my first GS Astuto custom wheel. When I converted the Bike Friday to a disk brake at the front in 2015, Tim built me a disk brake wheel based on a Shutter Precision centerlock hub and the DH-3N80 became available as a spare which is finally being reused.

The rear hub is a Shimano FH-RS505, an inexpensive 10/11-speed compatible centerlock hub available in a 36 spoke version. Its only drawback was that it’s only available in black, but Shintaro and I deanodized and polished it so it now matches the silver front hub. The Araya came with a 135 mm rear hub with an 8-speed cassette, but as a disk hub the RS505 is the right width and it works for 8/9/10 and 11 speed (give or take a few spacers). Because I specified a hub with both a spline for attaching a centerlock disk brake rotor and 11-speed compatibility, I am also able to install that wheel on my Elephant Bikes National Forest Explorer (NFE) if I need to.

For now I’m only using the front wheel on the Araya to replace the damaged front wheel while the new rear wheel is doing duty on my Elephant Bikes NFE: As I found out earlier this year, my Velocity Blunt SL rear rim on the NFE had developed cracks around several spoke holes. This flaw is probably the reason why the rim was withdrawn from the market by Velocity soon after I had bought them for my NFE.

I also have a B&M Cyo Premium headlight to go with the dynamo hub on the Araya. The easily removable front fork makes the Federal rinko-friendly, so I may be using it in place of the NFE on some long distance rides starting or finishing further from Tokyo.